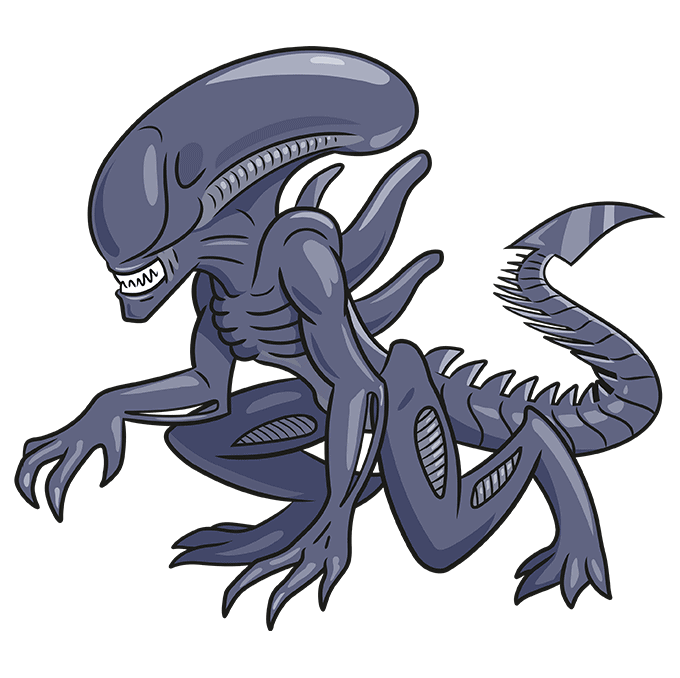 The xenomorph alien, also called Xenomorph XX121 or Internecivus raptus, is a fictional creature from the Alien film franchise. It has been included in numerous movies, comic books, video games, novels, and merchandise.

The aliens have a distinct and vicious life cycle. They begin as an egg, which hatches into a parasitic "face-hugger." True to its name, the facehugger latches on to the face of a host, which could be any creature from as small as a cat to as large as an elephant. It impregnates the host with a "chest-burster" larva which, as its name suggests, bursts from the host's chest before growing into an adult within hours.

The xenomorph aliens take on the traits of their host through an exchange of DNA. The bipedal alien in this drawing guide had a human host. Quadrupeds like dogs and cattle produce four-legged aliens that bite rather than using their arms. When the host is a Predator, another fictional creature, the Predalien results.

Did you know? The xenomorph alien was designed by the Swiss surrealist artist H.R. Giger, who is famous for his futuristic images of the link between humans and machines.

Would you like to draw a xenomorph alien? This easy, step-by-step cartoon drawing tutorial is here to show you how. All you will need is a pencil, an eraser, and a sheet of paper.

If you liked this tutorial, see also the following drawing guides: Alien, UFO, and Space Shuttle. 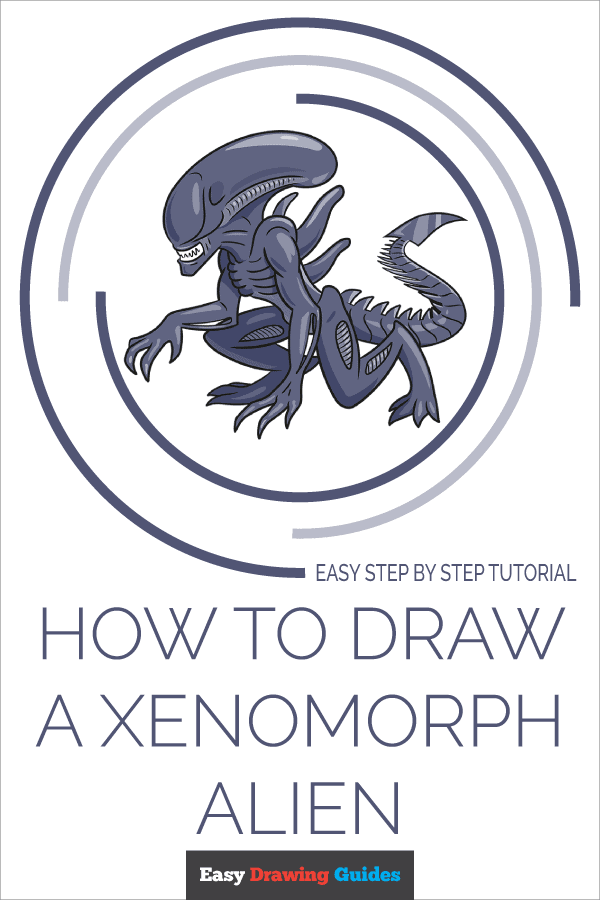 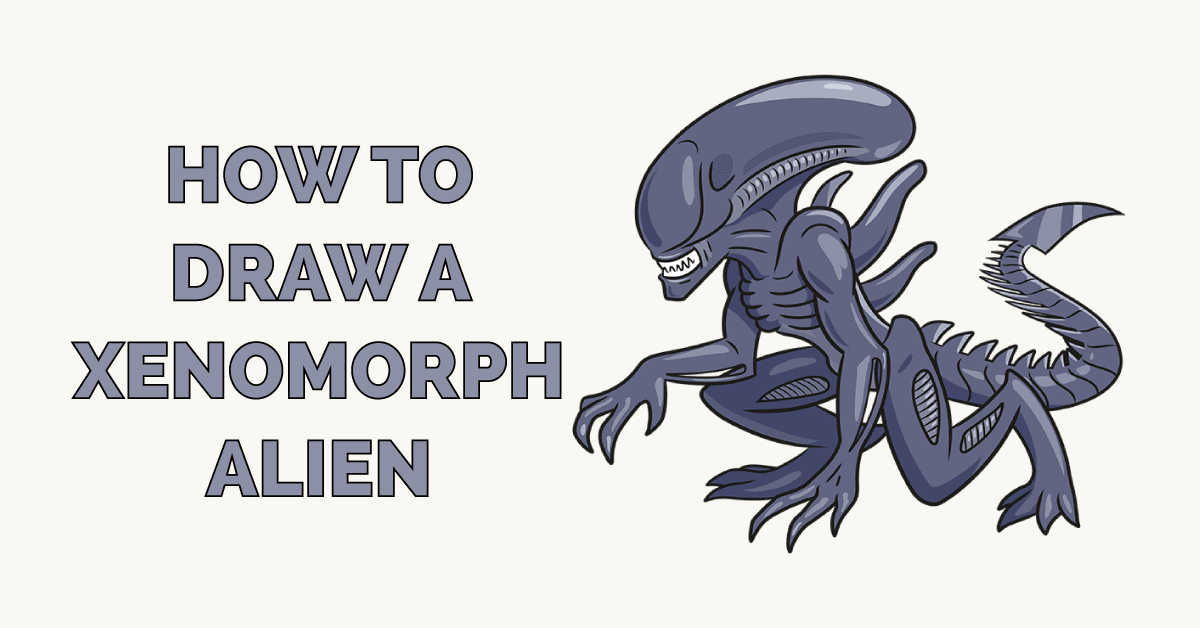 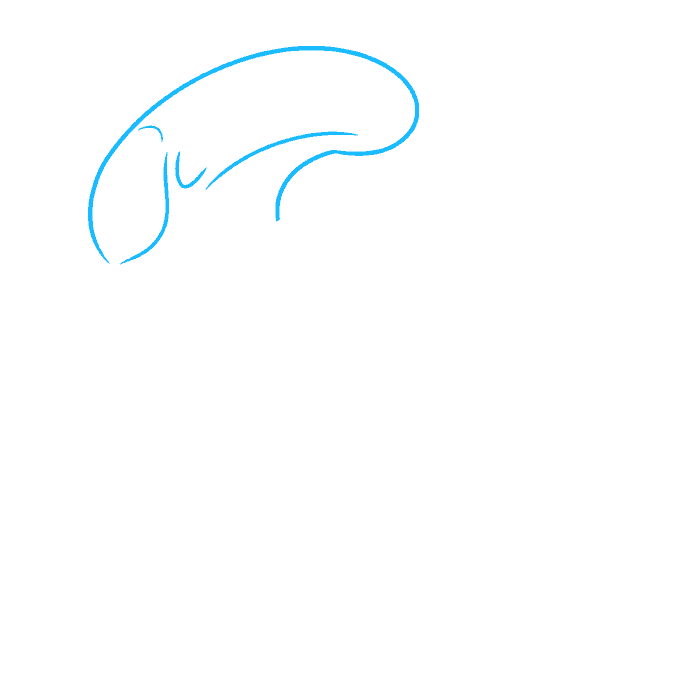 1. Use a long, curved line to outline the bean-shaped head. Contour the base of the head and forehead with curved lines. 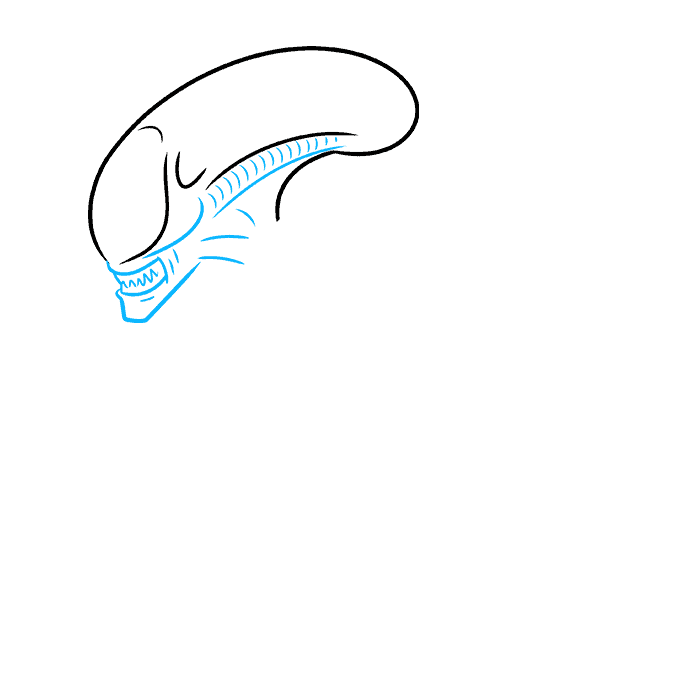 2. Use curved lines to contour the face, including the bands along the base of the head. Outline the jaw, and use a zigzag line to indicate the sharp teeth. 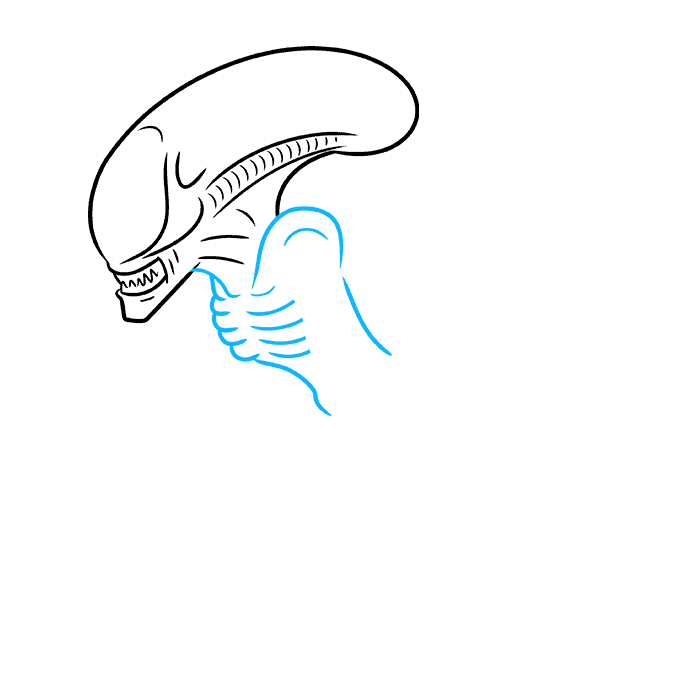 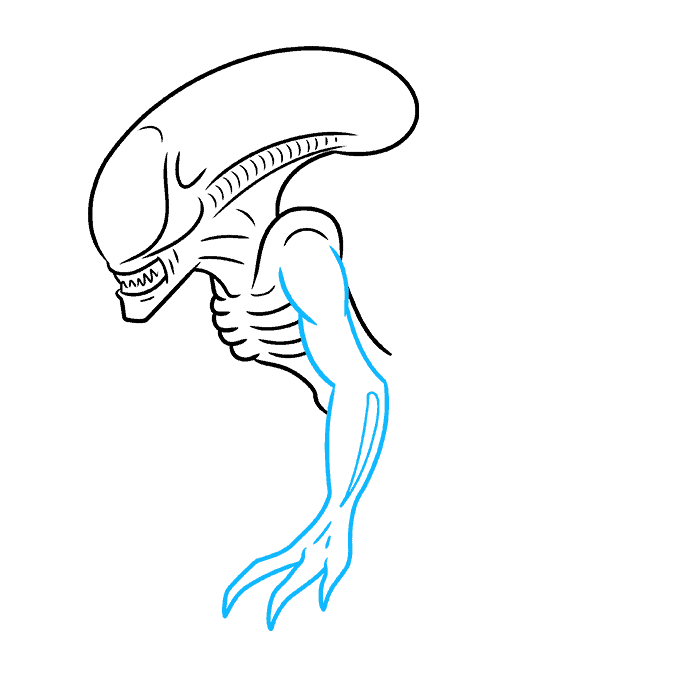 4. Draw the alien's muscular arm. Use pairs of lines to form the shoulder muscle, the upper arm, lower arm, and hand. Enclose an elongate teardrop shape along the lower arm. Enclose three pointed fingers, using two curved lines that meet at a point for each. Detail the ligaments of the hand with curved lines. 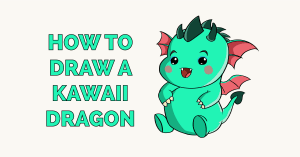 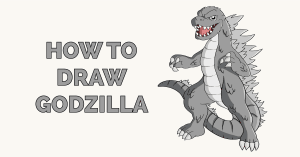 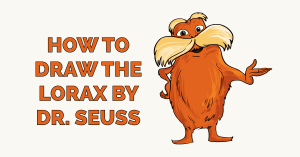 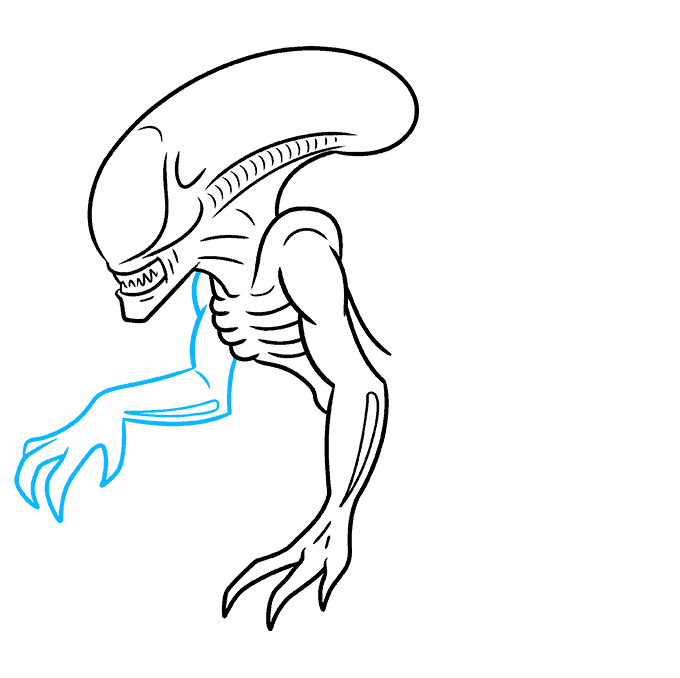 5. Draw the remaining arm. Use curved lines to sketch the shoulder, upper arm, lower arm, and hand. Note the short line indicating the bend of the elbow, and the elongated teardrop shape on the forearm. 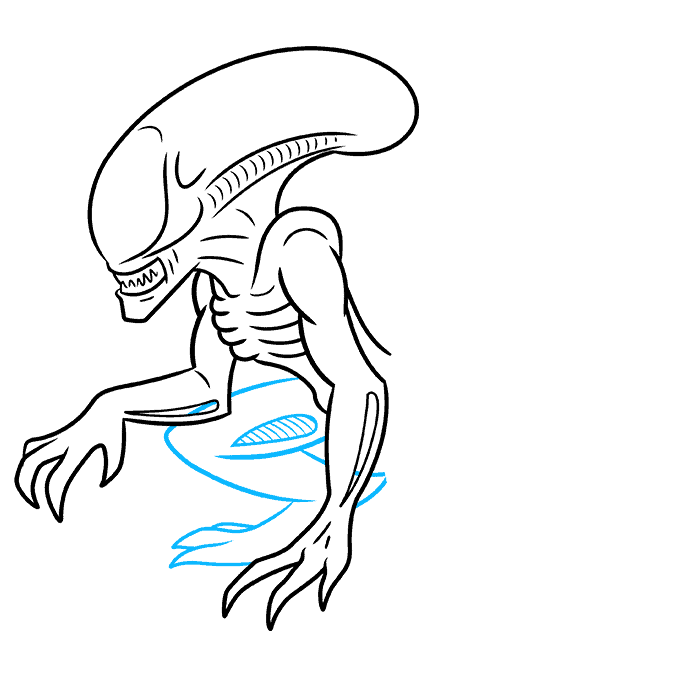 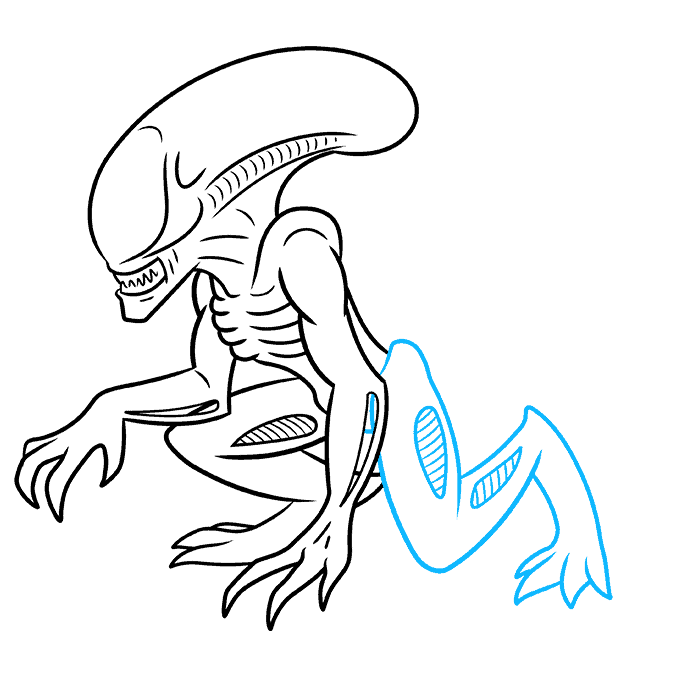 7. Draw the remaining leg. Use pairs of curved lines to sketch the upper leg, lower leg, foot, and pointed toes. Notice the curvature at the top of the hip. Draw teardrop shapes along the upper and lower legs, and band them with curved lines. 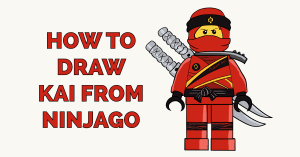 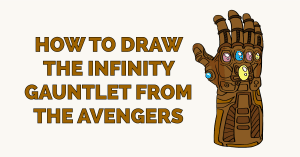 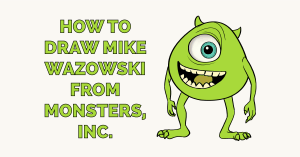 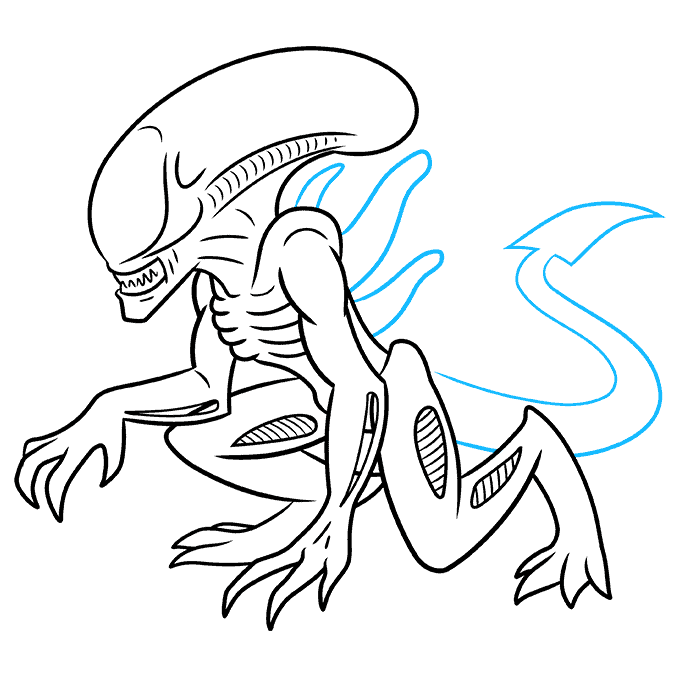 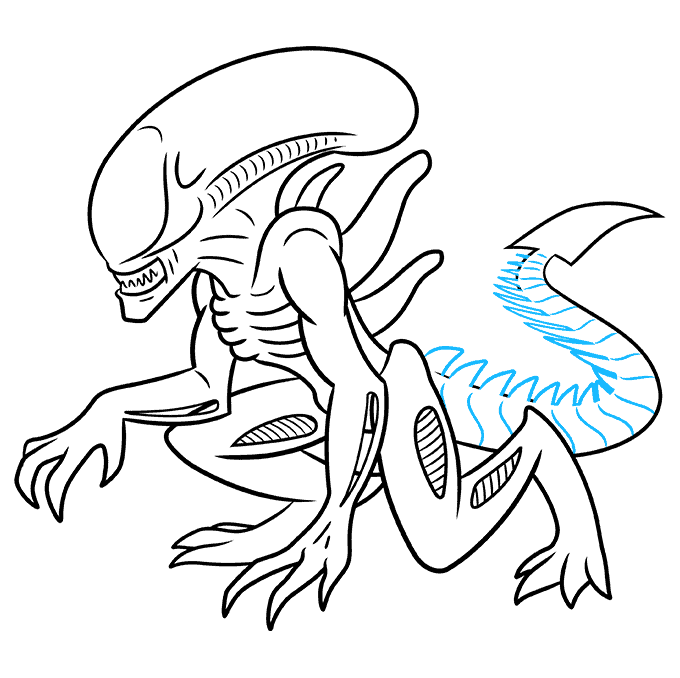 9. Draw triangular spikes along the top of the tail, erasing as necessary. Band the tail with loosely "S" shaped lines.

Color your cartoon alien. They are usually black or grey in color, but may be pale and pinkish when newly hatched.

Who else lives in your galaxy? Select your crew from our cartoon character drawing guides. 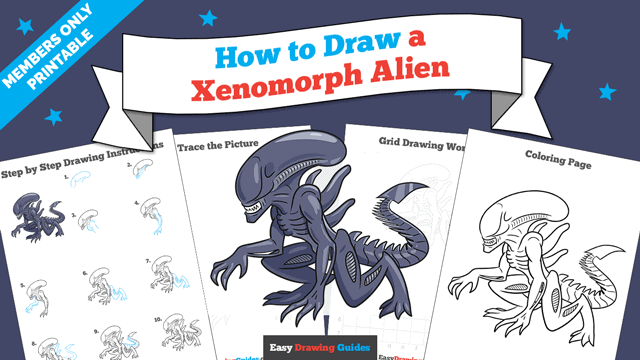