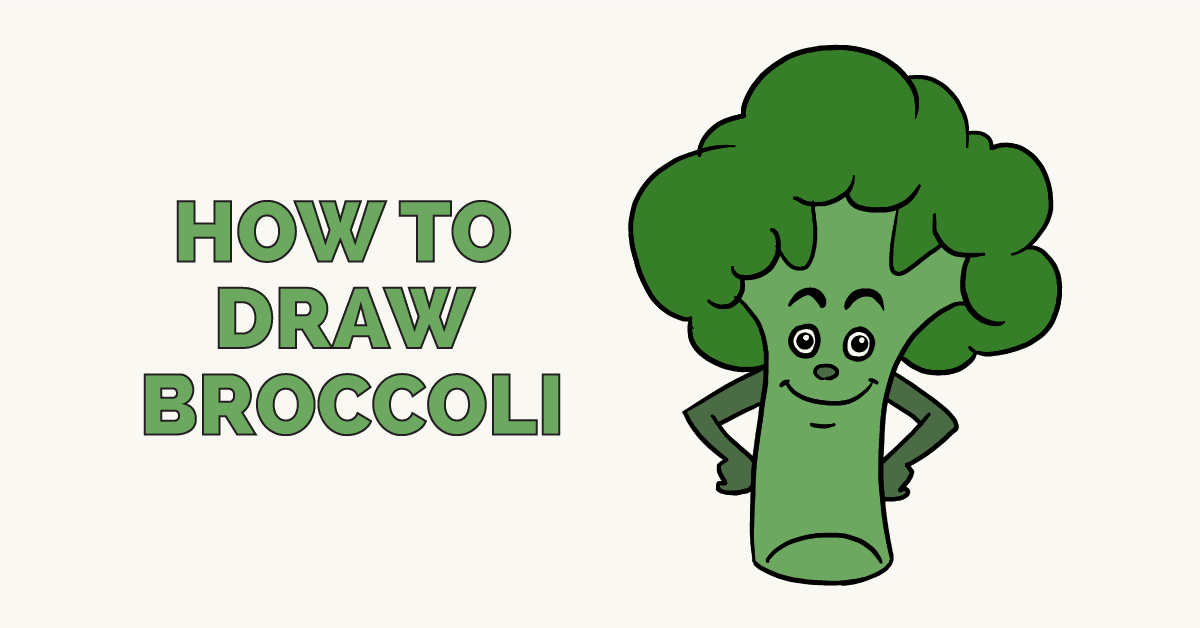 Broccoli - is it one of your favorite foods? Many people, kids and grown ups alike, would answer that question with a resounding "No!" Yet, people have been growing and eating broccoli for thousands of years, at least since the time of ancient Rome, around the sixth century B.C.

Broccoli is a member of the cabbage family of vegetables. It is rich in vitamins and minerals, especially vitamins C and K. The green "treetop" of the broccoli is actually a collection of tiny flowers that have yet to bloom. The next time you eat broccoli, think about the fact that you are actually eating flowers!

In popular culture, foods with faces - similar to that depicted in this drawing guide - sometimes appear. For example, the popular Shopkins toy line features "Rockin' Broc" and "Bethany Broccoli." The vegetable is also used in other forms of pop art. For example, one Star Wars themed cookbook pictures an Obi-Wan Kenobi action figure running through a forest of broccoli.

Would you like to draw broccoli? Doing so is easier than ever, with the help of this simple, step-by-step drawing tutorial. All you will need is a pencil, pen, or marker, and a sheet of paper. You may also want to use a green crayon, colored pencil, or marker to shade your finished broccoli.

If you liked this tutorial, see also the following drawing guides: Corn Cob, Eyes, and Lippy Lips from Shopkins.

1. Begin by drawing two curved lines, nearly vertical and parallel to one another. Notice that the lines diverge, or curve away from one another, at the top.

2. Draw two "U" shaped lines above the lines drawn in the previous step. Broccoli resembles a small tree, and so should your drawing - a tree with branches going up, left, and right.

3. Enclose the bottom of the broccoli using a curved line. Then, draw a line curved in the opposite direction just above it. This forms the flat edge where the broccoli bunch was cut from the plant.

4. Draw two rounded, "U" shaped lines at the top of each branch. This fully encloses the stem or stalk of the broccoli.

5. Draw a series of curved lines of various lengths, beginning on one side of the stem, traveling over the top, and reconnecting on the opposite side to enclose the broccoli's crown. The crown should be rounded and cloudlike in appearance.

6. Draw a set of diagonal, parallel lines extending from one side of the stem. Then, draw another set of lines connected at right angles, curving back toward the stem. Finally, use several connected, curved lines to enclose a rounded shape. This forms the broccoli's arm and hand.

7. Repeat this process to form a mirror image on the opposite side. Extend a pair of parallel lines from the stem, and then draw a second pair at right angles to the first. Enclose the shape by drawing a rounded hand using several curved lines.

8. Give the broccoli eyes. Draw three circles for each eye, one within the other. Shade between the two smallest circles, indicating the pupil of the eye. Above each eye, draw a thick curved line to indicate the eyebrows.

9. Complete the broccoli's face. Draw an oval to form the nose, and a wide "U" shaped line for the smiling mouth. Draw a short line at each end of the mouth, and another beneath the mouth.

10. Color your broccoli. It is a dark green vegetable. Cauliflower, a similar food, can be white, yellow, orange, or purple.

Would you like to draw other foods with faces? Get started with this corn on the cob, then create your own using our eyes and mouth drawing guides.

The Complete Broccoli Drawing Tutorial in One Image

How to draw: Broccoli - all drawing steps