By following the simple steps, you too can easily draw a beautiful Scary Clown. 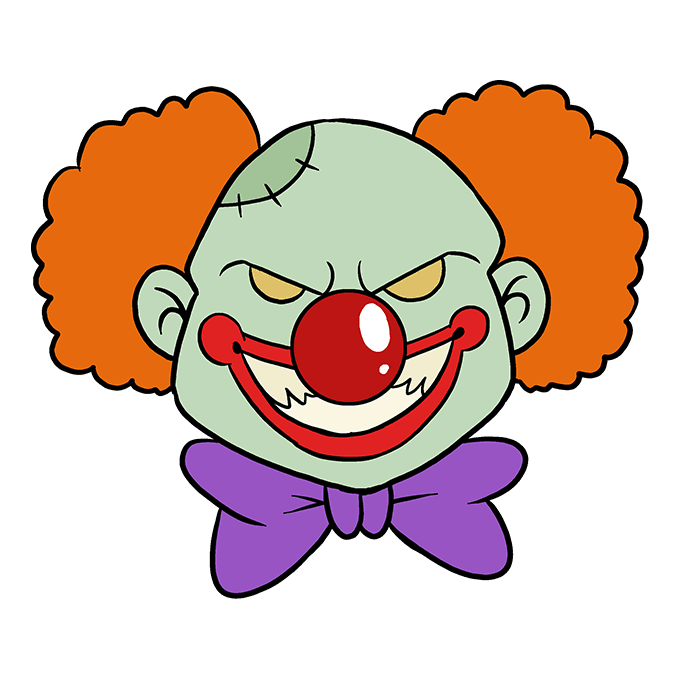 Clowns have a long history in various world cultures. The idea of the clown as a comical figure can be traced to court jesters in ancient Egypt and other regions.

​In the early 1800s, the appearance of the modern clown became popular in British theater, and later migrated to the American circus and rodeo.

The clowning tradition was taken up by comedic performers such as Red Skelton and later became the mascot for McDonald's restaurants.

While originally designed to entertain with a laugh, clowns today often elicit the opposite reaction - repulsion fear. Did you know that psychologists recognize the fear of clowns as a phobia, called coulrophobia?

​What causes such fear? Researchers assume that the painted face of the clown may produce unease due to the "uncanny valley" effect, in which something is lifelike yet not realistic, and therefore frightening. Childhood encounters may produce lifelong effects.

The entertainment media has monopolized on this reaction, staffing comedy, action, and horror films with such characters.

​​​For example, in the 1940s, DC Comics introduced the Joker, Batman's nemesis. He is a clown-like villain who loves dangerous practical jokes, and remains a key player in the DC franchise.

In the 1980s, Stephen King's It became the first horror film to feature a sociopathic clown, and the Simpsons cartoon introduced Krusty the Clown, a generally harmless but at times scary and dark figure.

A number of children's cartoons, including Disney's Pepper Ann, have addressed this theme.

​Would you like to use your mad art skills to draw a scary clown? This easy, step-by-step drawing tutorial is here to help.

You will need only a pencil and a sheet of paper. You may also wish to use crayons, colored pencils, markers, or paints to complete your drawing.​

Step by Step Instructions for Drawing a ​​Scary Clown 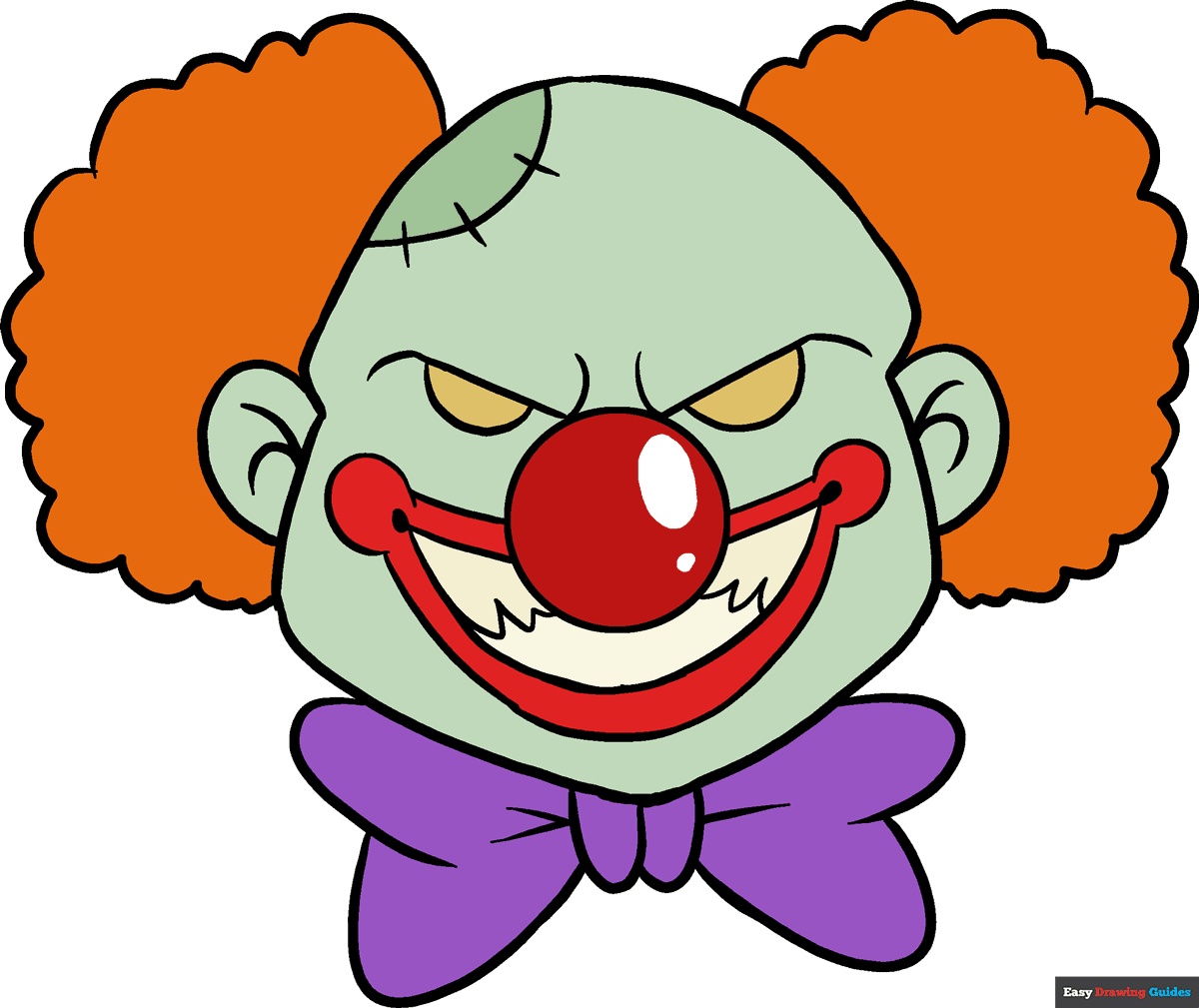 How to Draw a Great Looking Scary Clown for Kids, Beginners, and Adults - Step 1 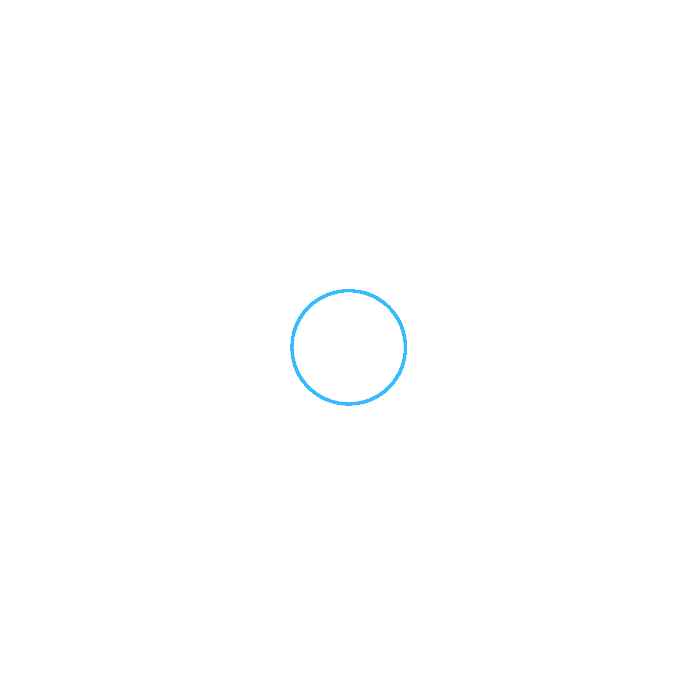 1. Begin by drawing a circle. This will form the clown's nose. 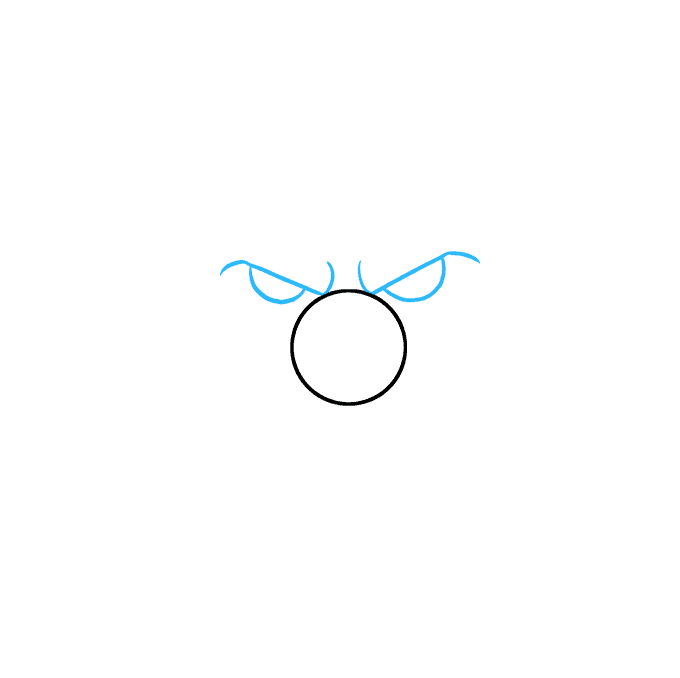 2. Above the circle, draw two sets of curved lines to outline the brow. Beneath each brow, enclose a half circle to form the eyes. 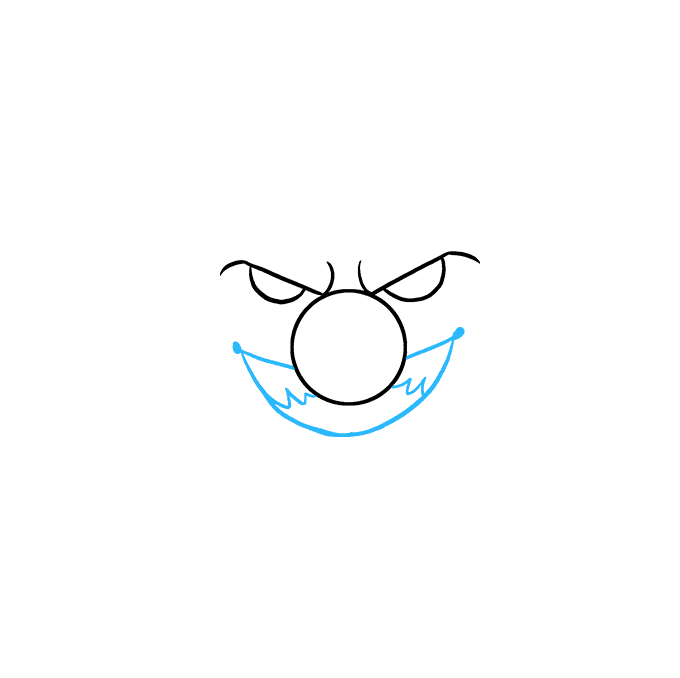 3. To draw the mouth, begin with a long, curved line beneath the nose. Attach it to the nose using two shorter lines. Draw a dot at each corner of the mouth, and detail the inside of the mouth using a jagged line. 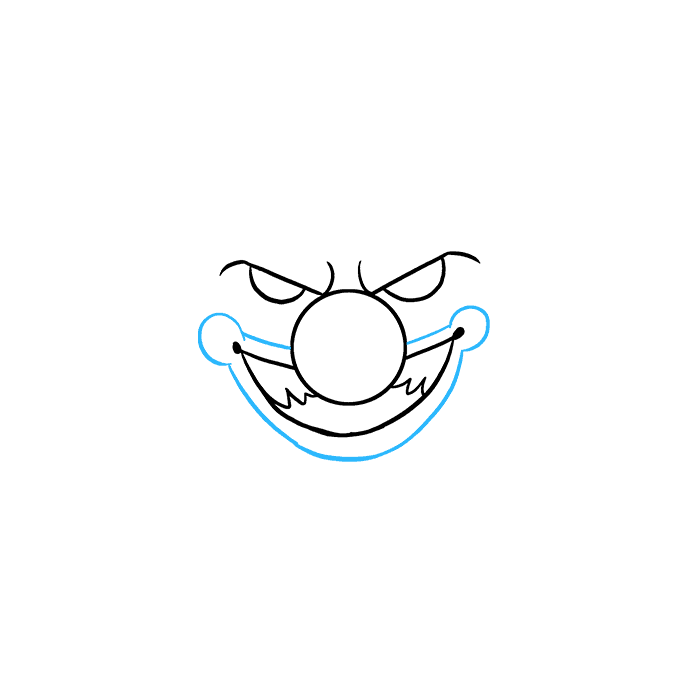 4. Outline the mouth, drawing new lines parallel to those previously drawn. Notice how this outline forms circles around the dots at the corners of the mouth.​ 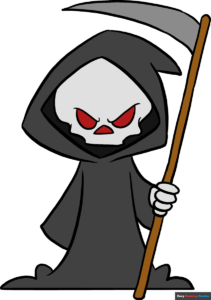 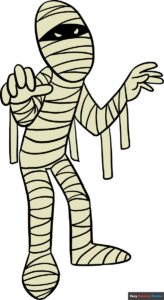 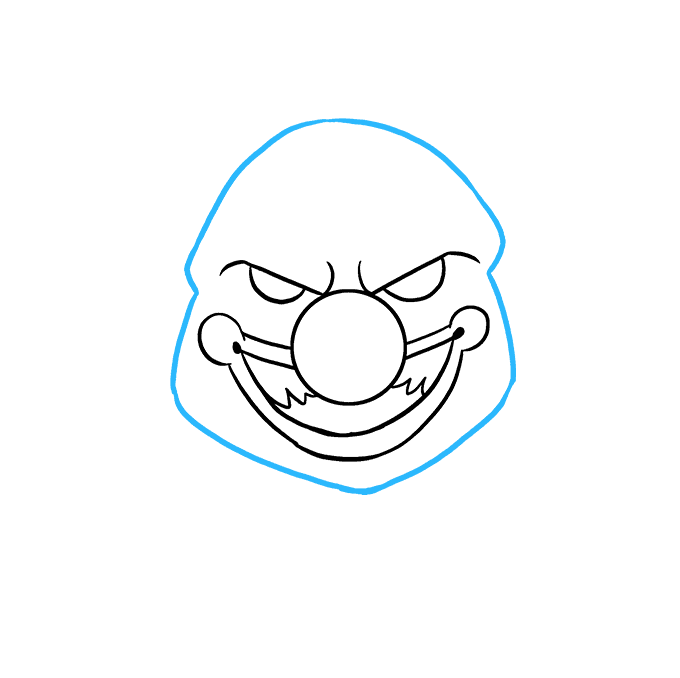 ​​​5. Using a long, curved line, outline the clown's head. Notice the bulges near the eyes, jaw, and chin. 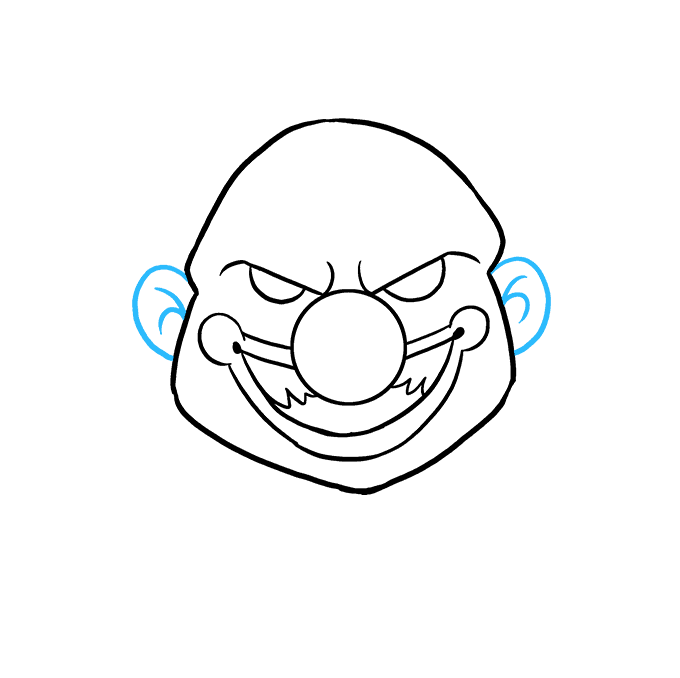 6. ​Enclose a circular shape to indicate each ear. Detail the inside of the ear using short, curved lines. 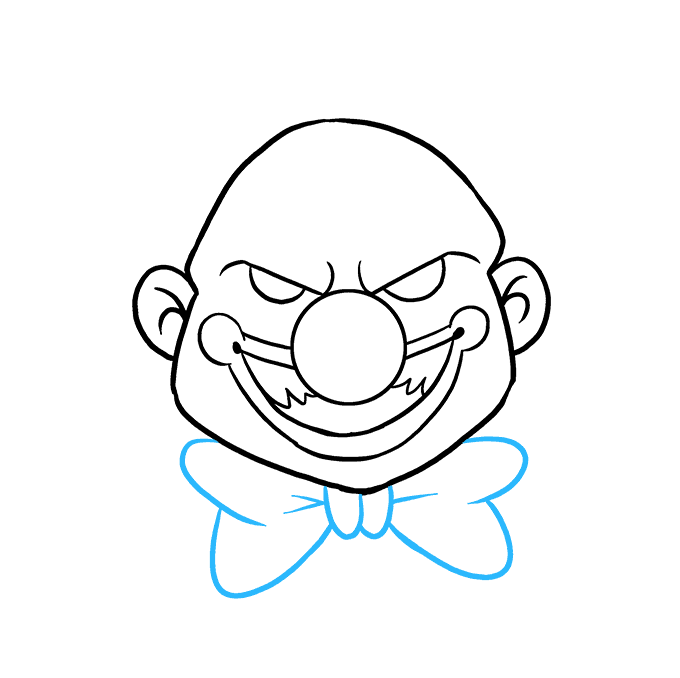 7. Draw a bow tie around the clown's neck. For the knot of the bow, enclose two rounded shapes. Then, use long, "U" shaped lines to form the sides of the bow. Add the detail of pinched fabric near the knot using short, curved lines. 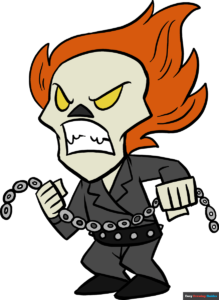 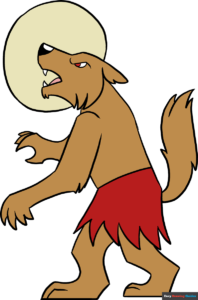 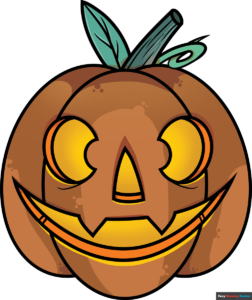 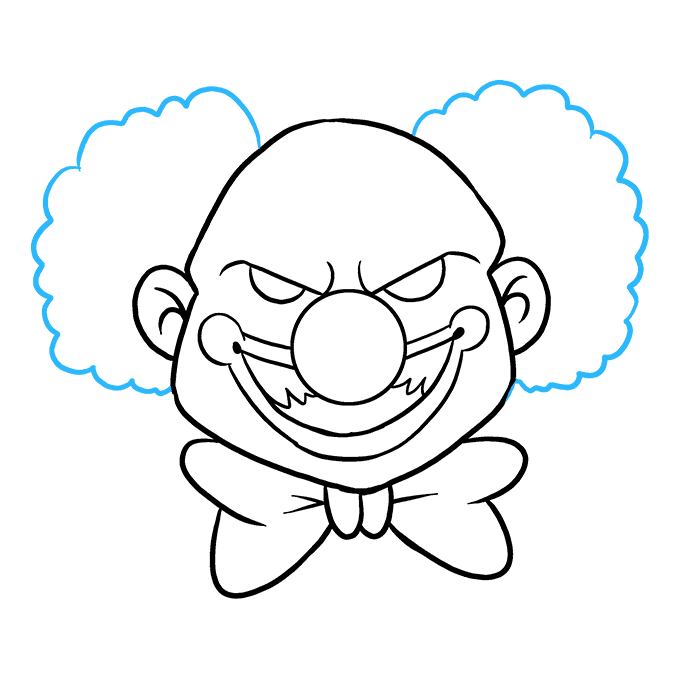 8. Draw a tuft of fluffy hair on each side of the clown's head. Do so by using a series of short, connected, curved lines.

Complete the Outline of Your Scary Clown Drawing - Step 9 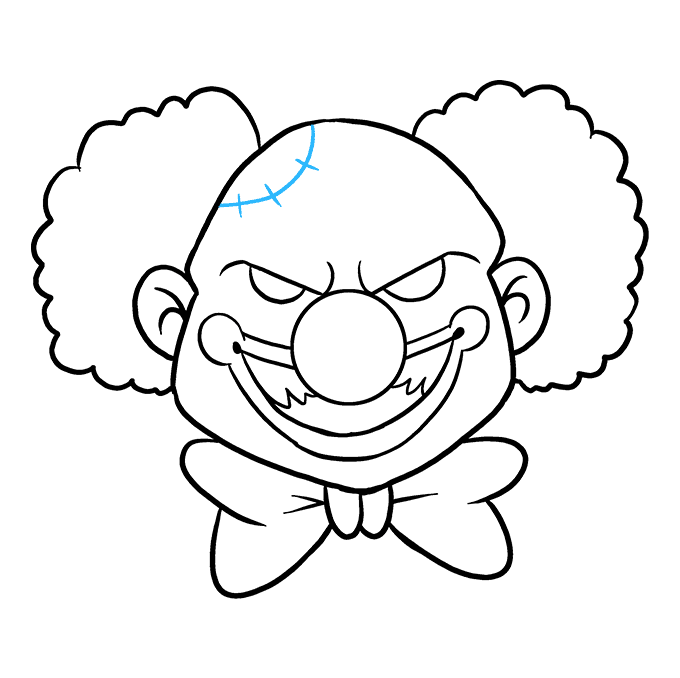 9. Draw a scar on the clown's face. Enclose a semicircle using a curved line. Then, cross it with short lines that resemble stitches.

10. ​​​​Color the scary clown. If he needs any circus animals to accompany him, we've got elephants, and lions, and tigers, and bears, oh my! 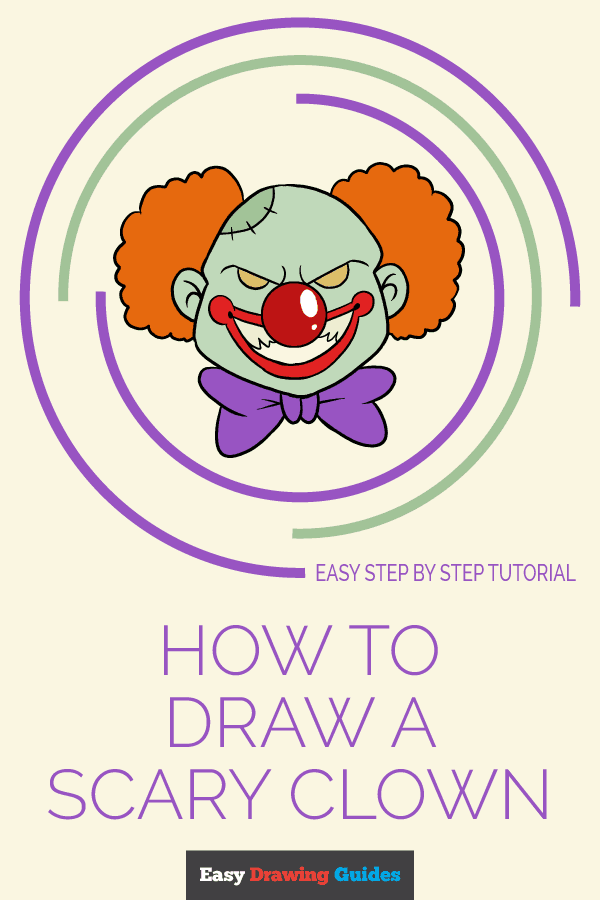 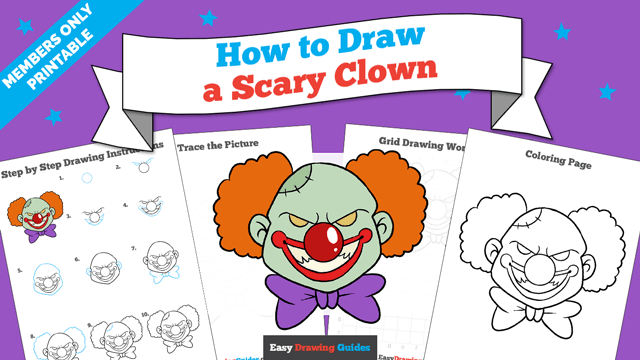