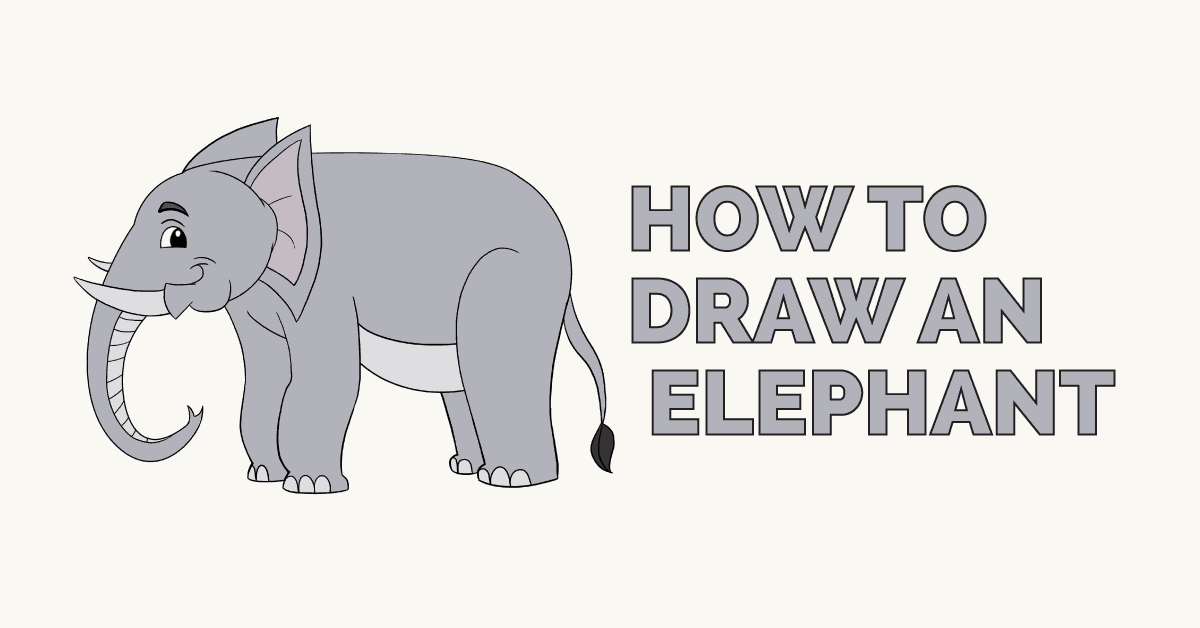 "If you cannot find a good companion to walk with, walk alone, like an elephant in the jungle. It is better to be alone than to be with those who will hinder your progress."
- Buddhist proverb

The elephant is one of the most recognizable animals on the planet. It is the largest land mammal, weighing up to 8,000 kilograms (9 tons). Elephants have an appetite to match, consuming up to 400 pounds of food and 50 gallons of water daily. They are native to Africa and Asia, but can be found in zoos and circuses around the world.

Elephants are known for their long trunks, which they can use like a straw or a hand. They also have long tusks made of ivory, which they use for digging and defense. Elephants cool their large bodies by rolling in mud or flapping their enormous ears, which have ample surface area for heat dissipation.

Did you know? There are three distinct species of elephant: the African bush elephant, African forest elephant, and the smaller Asian elephant. In Asia, some elephants are trained as working animals, for instance, carrying passengers or moving logs and other heavy materials.

Elephants have long featured in myth, literature, art, and other elements of popular culture. For instance, some Hindu deities are represented by the elephant. "The Three Blind Men and the Elephant" is a fable about perspective. A modern example is Dumbo, the adorable baby elephant from Disney's animated and live-action films.

Would you like to draw a cartoon elephant? You can learn by following the steps of this easy drawing tutorial. You'll use simple shapes and lines to create your drawing. Sharpen your pencils, and have your eraser handy!

If you liked this tutorial, see also the following drawing guides: Goat, Cheetah, and Polar Bear.

Step-by-Step Instructions for Drawing an Elephant 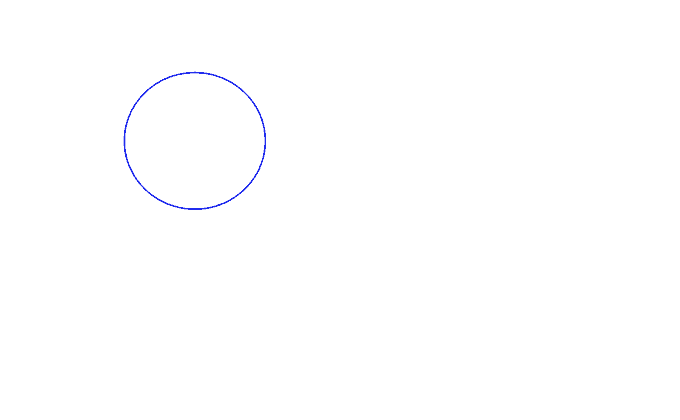 1. Begin by drawing a circle. This will become the elephant's head. 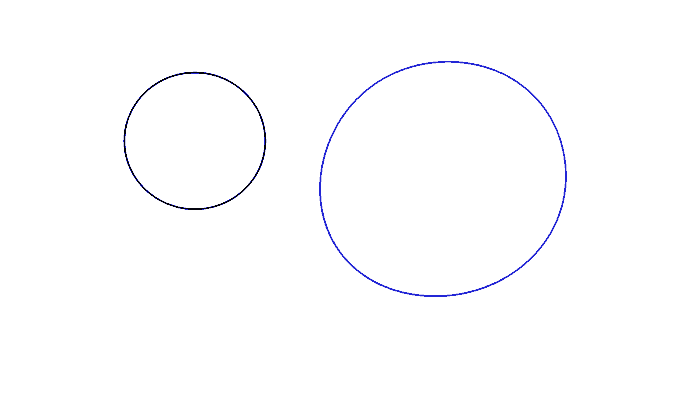 2. Draw another, larger circle. This will help you outline the elephant's body. 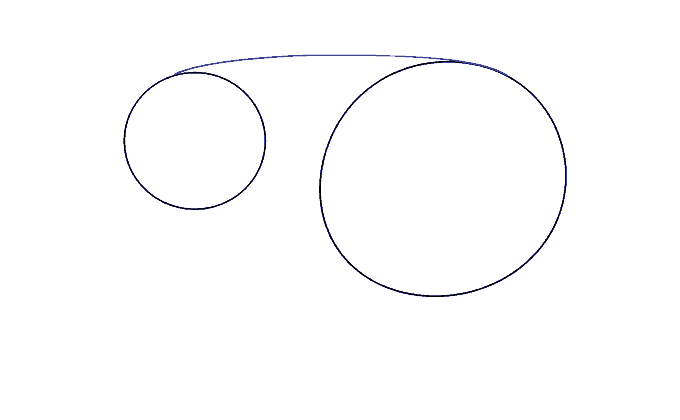 3. Connect the tops of the two circles with a long curved line. This outlines the elephant's back. 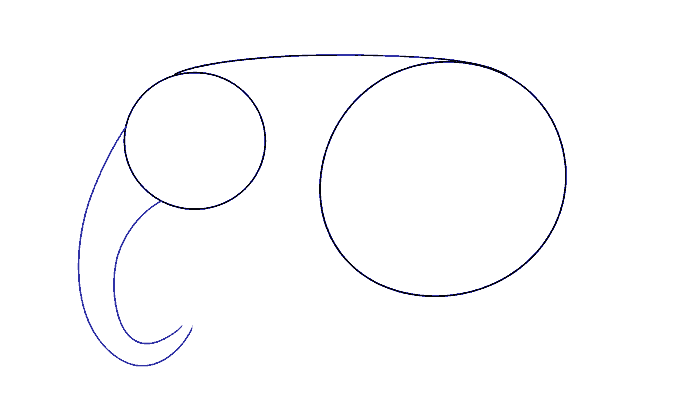 4. From the small circle, extend a pair of curved lines. The lines should run roughly parallel to one another, converging but not meeting. This forms the elephant's trunk. 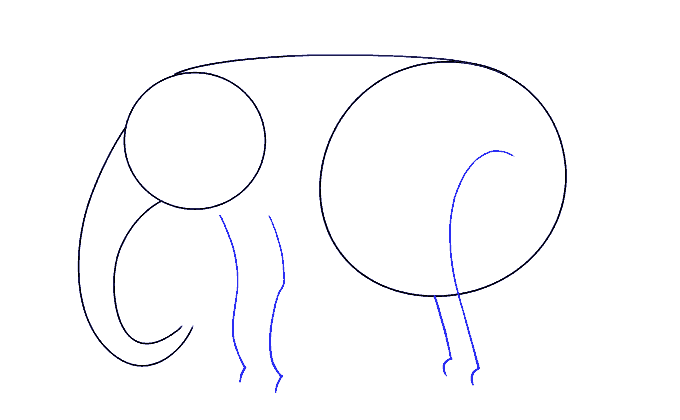 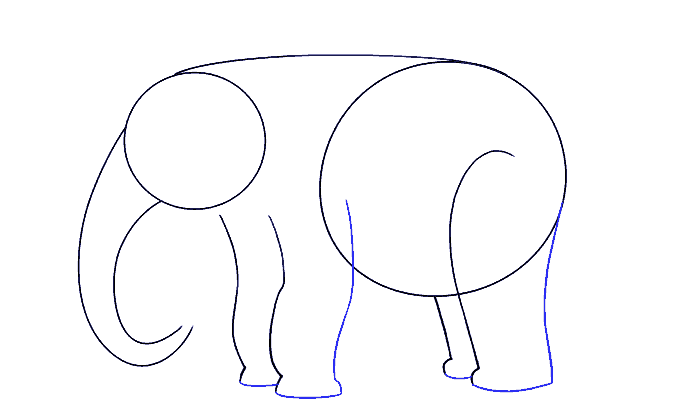 6. Complete the outlines of the front and rear legs using curved lines. 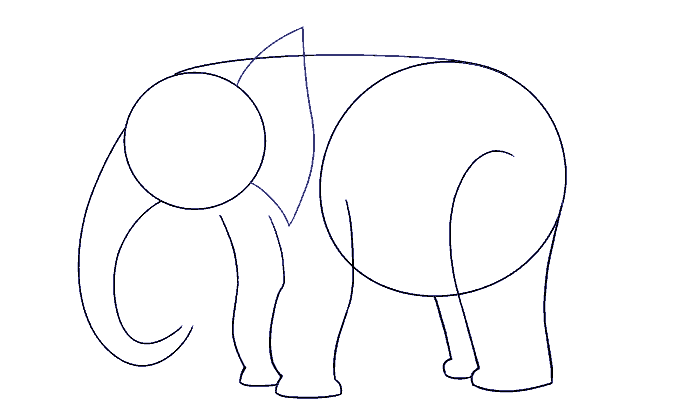 7. Outline the elephant's ear. Extend curved lines from the circle of the head. Then, connect them using a long curved line. 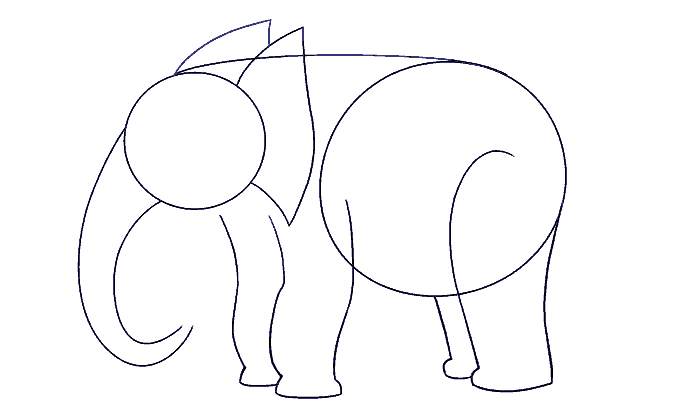 8. Draw the remaining ear, partially hidden behind the animal. Use curved lines to enclose the triangular shape. 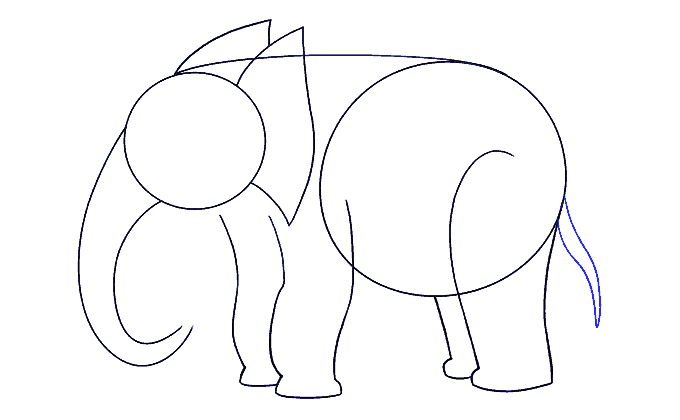 9. Draw the elephant's tail. Extend a pair of curved lines from the large circle. Allow them to meet at a point. 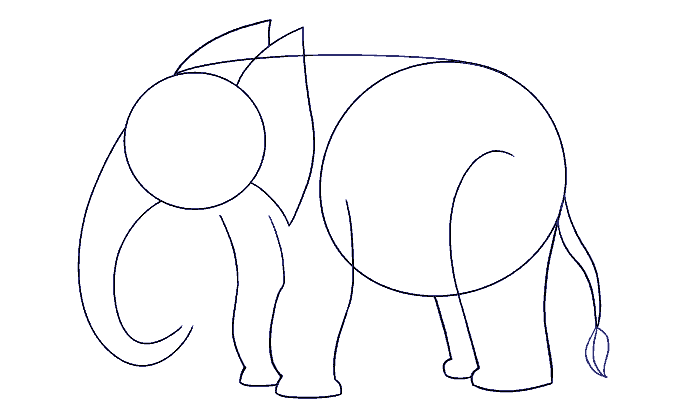 10. Draw the tuft of hair at the tip of the elephant's tail. From the tip, extend two curved lines. Allow them to meet at a point. Draw a third curved line down the center of the tuft. 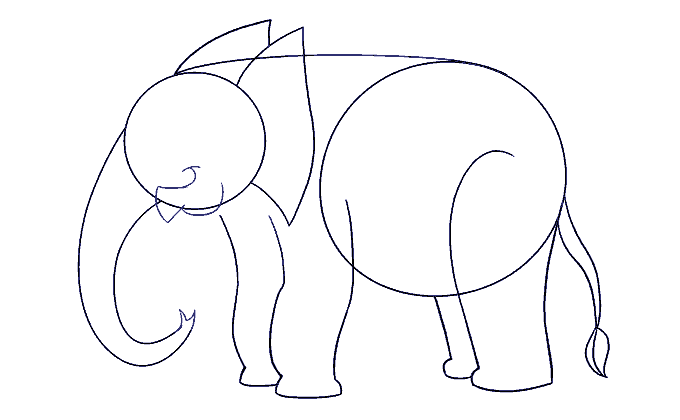 11. Finish enclosing the trunk using a "V" shaped line. Then, draw the elephant's mouth and jaw. Use a series of curved lines to sketch the irregular shape. 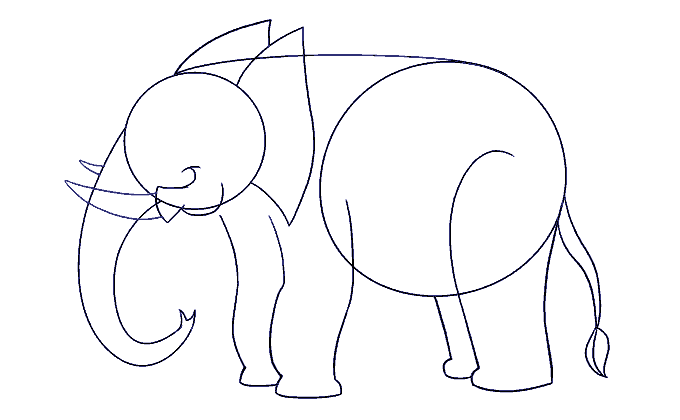 12. Draw the elephant's tusks. Use curved lines to enclose the triangular shapes. 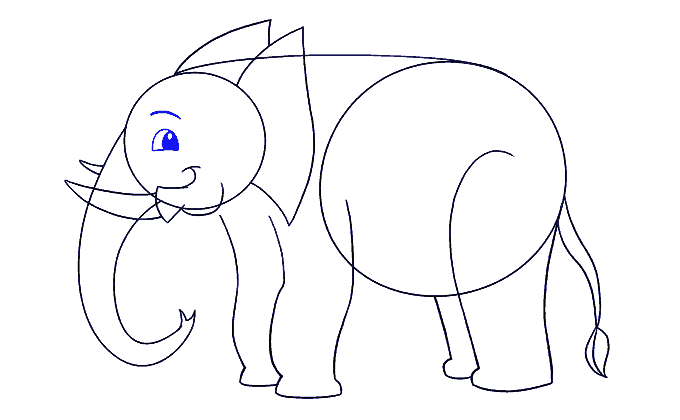 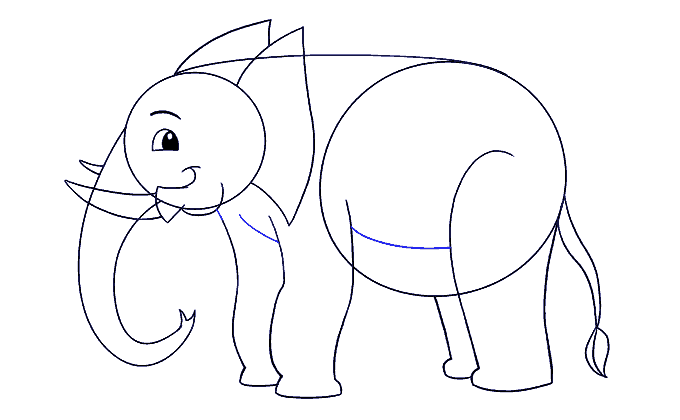 14. Draw curved lines to form the pachyderm's belly and chest. 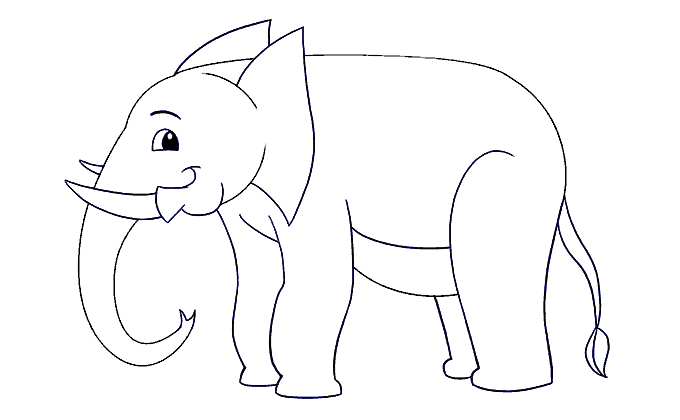 15. Erase the guide lines from the elephant, leaving a clean outline. 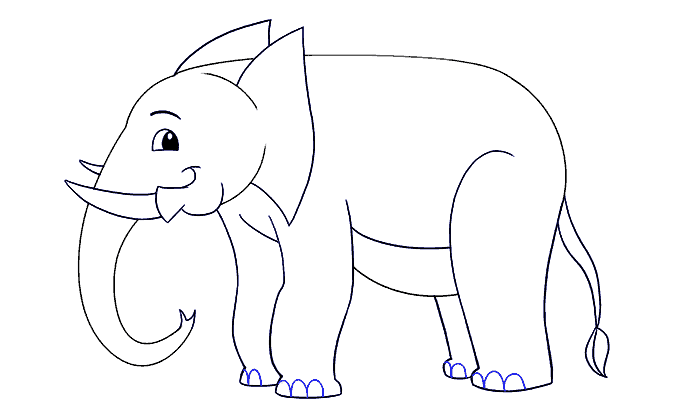 16. Draw inverted "U" shaped lines on the feet to indicate the toes. 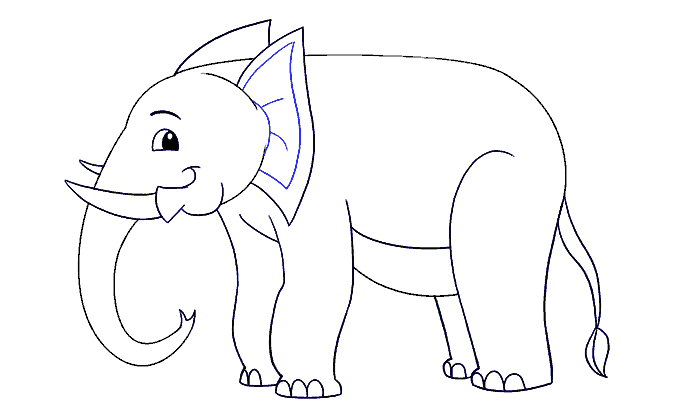 17. Detail the inside of the elephant's ear. Draw curved lines roughly parallel to the outline of the ear. Then, contour it with curved lines. 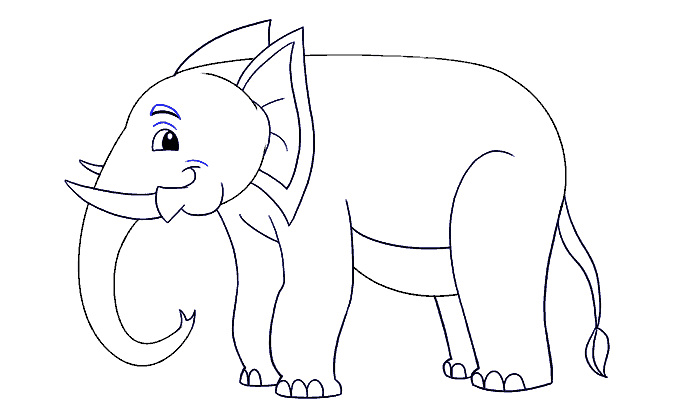 18. Thicken the eyebrow with an additional curved line, meeting the previous at points. Contour the face. with curved lines above the eye and at the corner of the mouth. 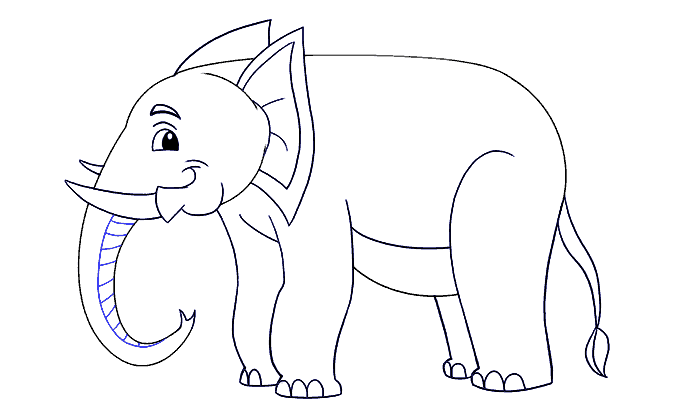 19. Draw a curved line down the center of the trunk. Then, band the trunk's underside with curved lines. 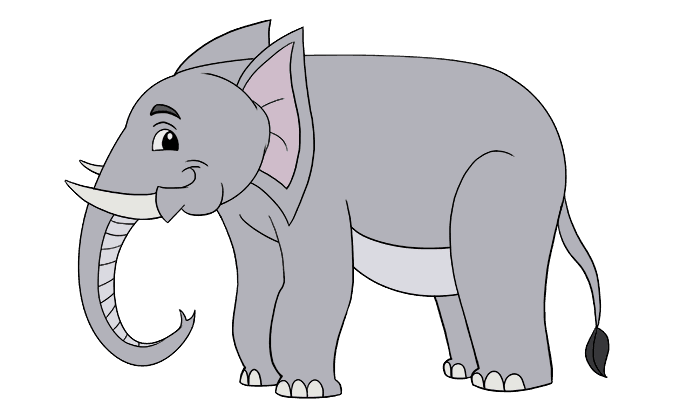 20. Color your cartoon elephant. They are usually grey in color.