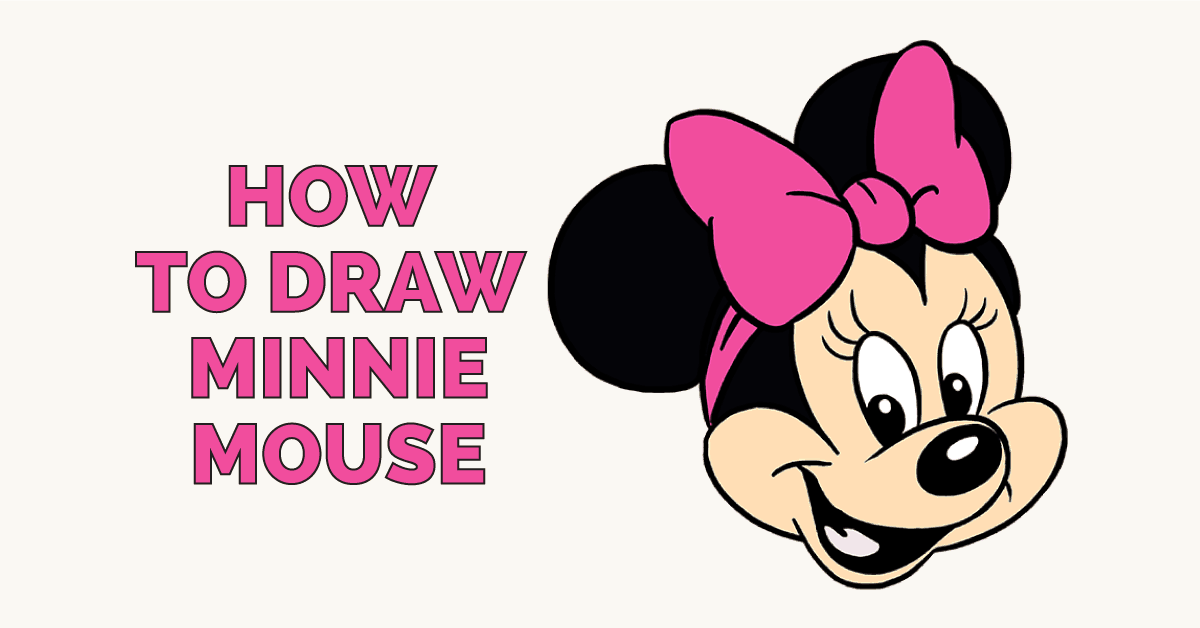 The beloved character Minnie Mouse first appeared in the cartoon Steamboat Willie, along with Mickey Mouse, on November 8, 1928. Originally voiced by Walt Disney himself, Minnie soon appeared in comic strips and other short cartoons, often as Mickey's love interest and a damsel in distress.

By the late 1930s, Minnie's popularity had begun to wane. She appeared less often in cartoons, replaced by characters such as Donald Duck, Goofy, and Pluto. Minnie made her comeback, however, in the 1980s, when she first starred in her own feature length film. She has since been seen in a leading or supporting role in many Disney cartoons.

Minnie Mouse makes appearances in other media as well. She can be found in abundance on Disney merchandise, in video games such as Kingdom Hearts, and in person at Disney theme parks.

Would you like to be able to draw Minnie Mouse? Now you can, with the help of this easy, step-by-step drawing tutorial. All you will need is a pencil and a piece of paper. You may also want to have an eraser to correct mistakes and erase guide lines, and something with which to color your finished drawing - colored pencils, crayons, markers, or paints.

Notice that each step in this simple drawing guide includes both text and illustrations. In each illustration, new lines added in the current step are highlighted in blue. Lines drawn in previous steps are shown in black. 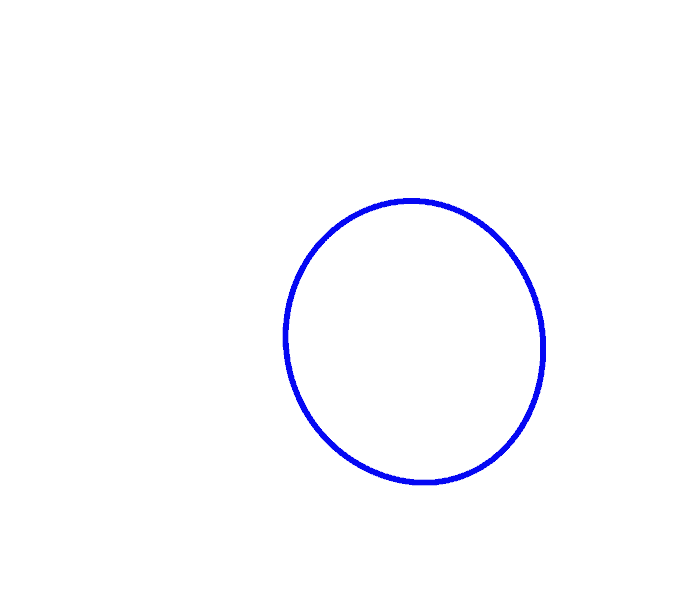 Begin by drawing a circle. This will form Minnie's head. 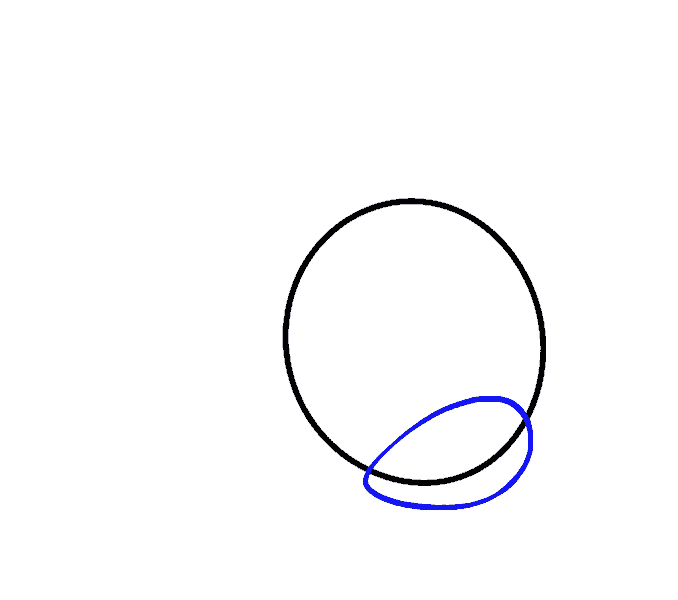 Next, draw an egg shape overlapping the bottom of the circle. This will help you to sketch Minnie's nose. 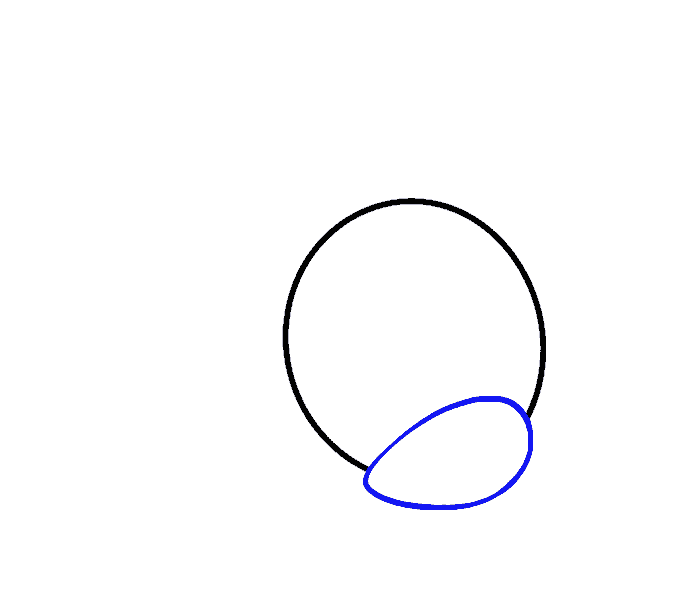 Erase the guide line from within the egg shape. 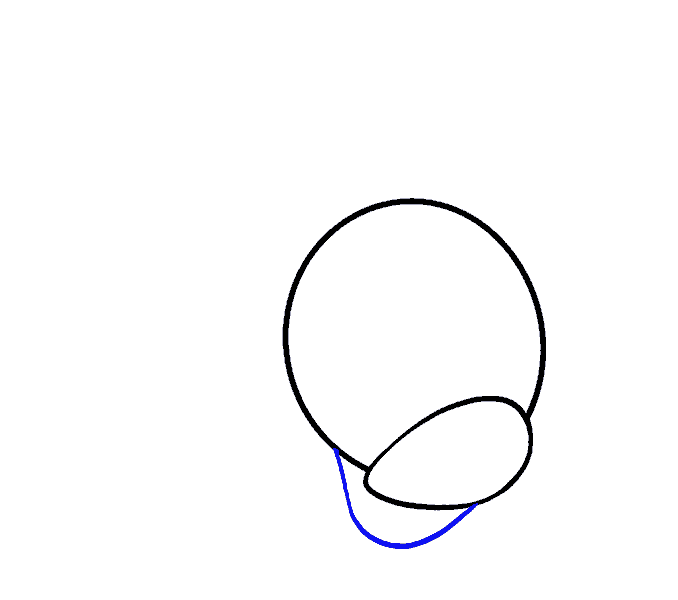 Draw a curved line from the bottom of the circle to the egg shape. This will form Minnie's lower jaw. 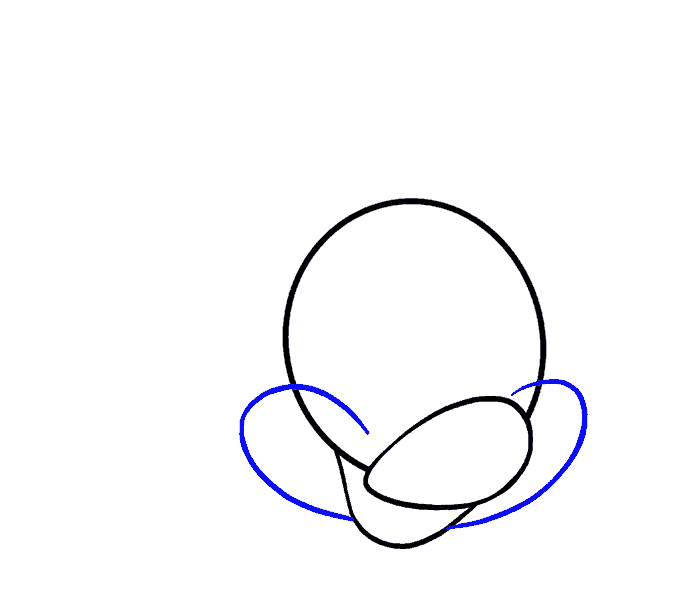 Draw a curved line extending from the lower jaw to the inside of the circle. Repeat on the opposite side. These curves will form Minnie's cheeks. 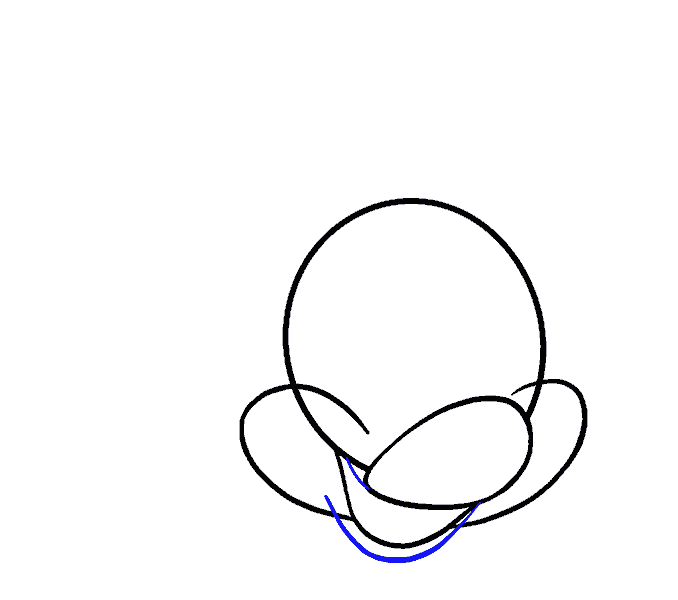 Draw a curved line below the lower jaw line. Within the jaw, draw a short curved line from the circle to the egg shape. 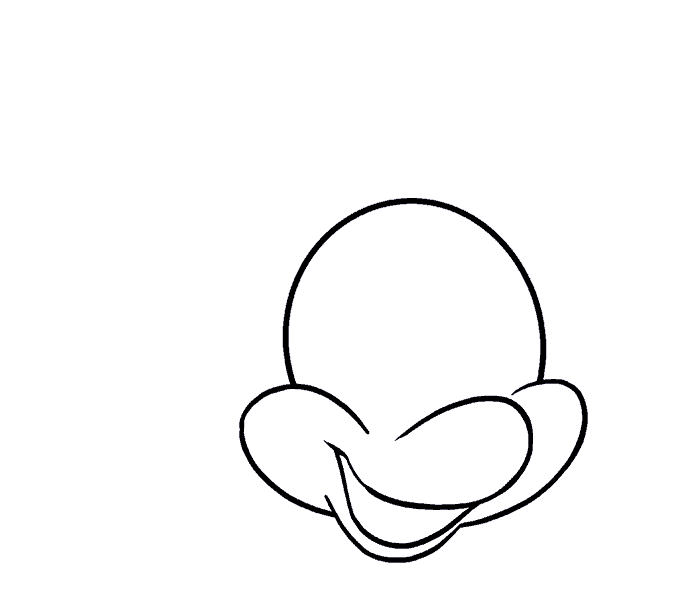 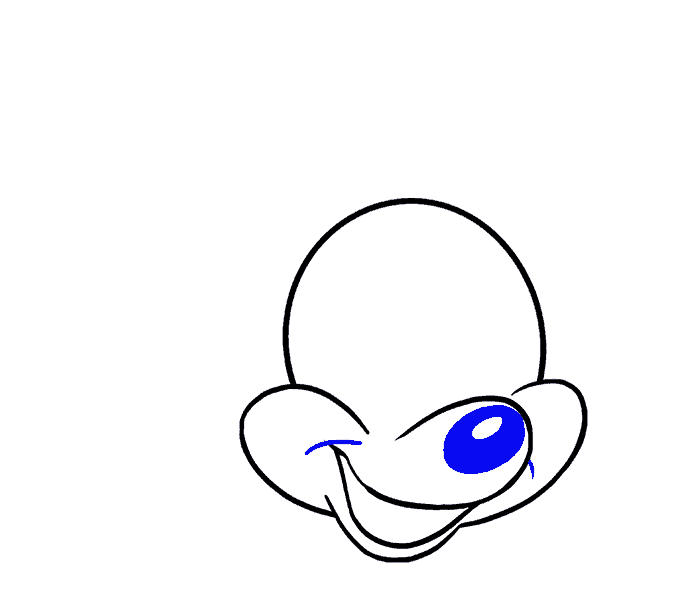 Draw a large oval on the tip of the nose, and a smaller oval within the first. Shade between the two ovals to form Minnie's shiny nose. Draw a curved line on each side of the mouth. 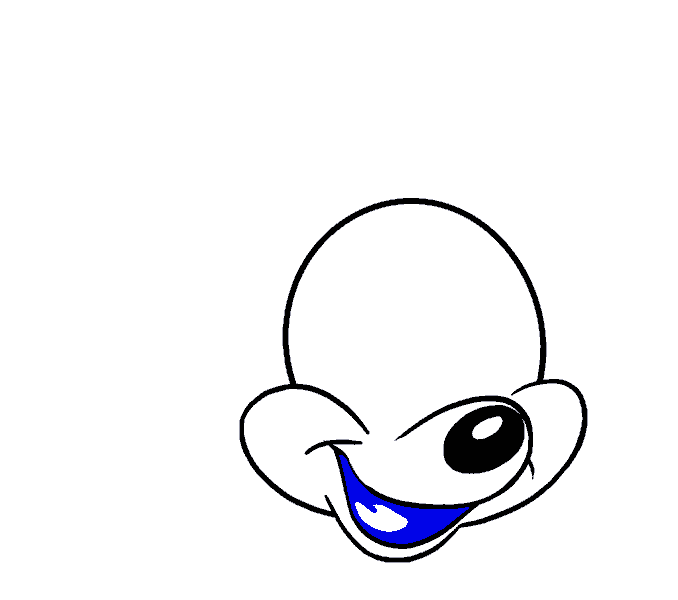 Draw an irregular shape within the mouth to form the tongue, and shade the mouth. 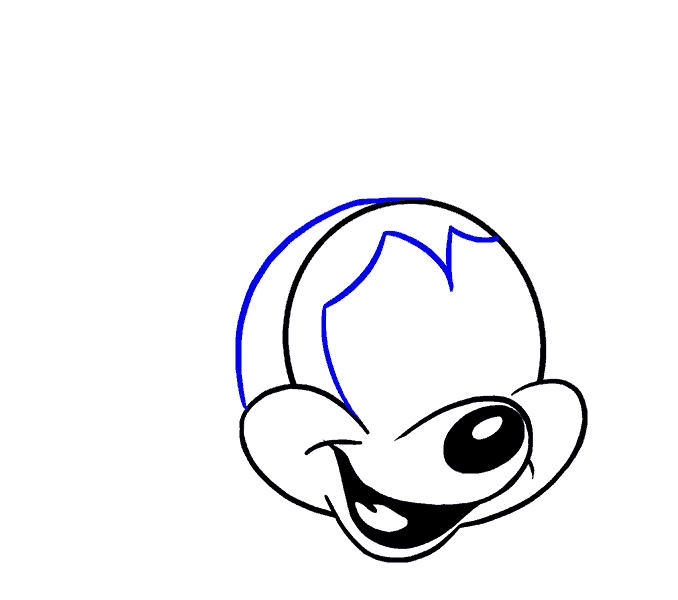 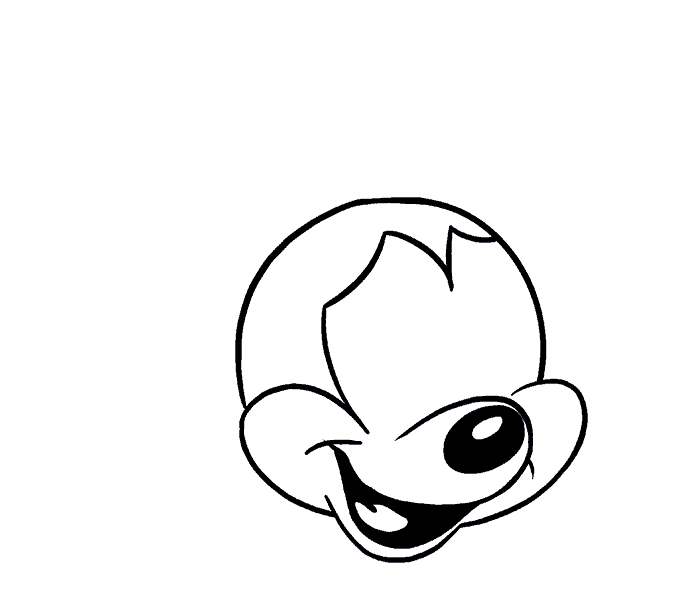 Erase the guide line from the head. 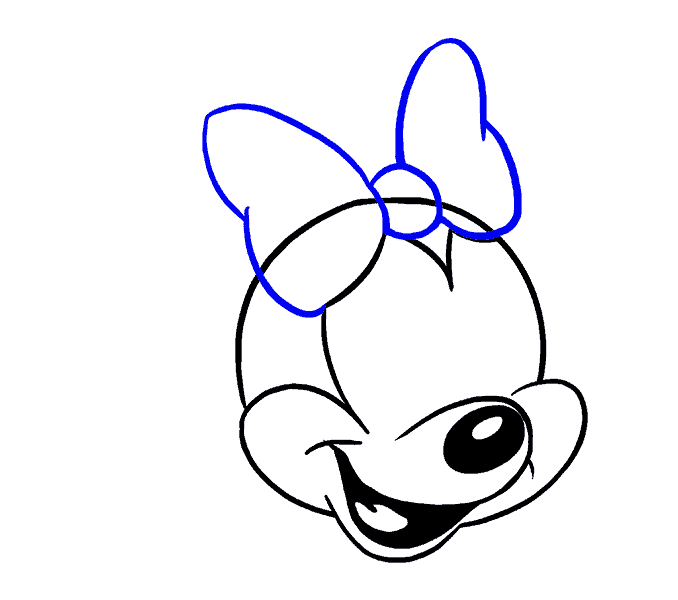 Draw Minnie's famous bow. Begin by drawing a circular shape for the knot, and extending curved lines from each side to enclose a large, irregular shape. 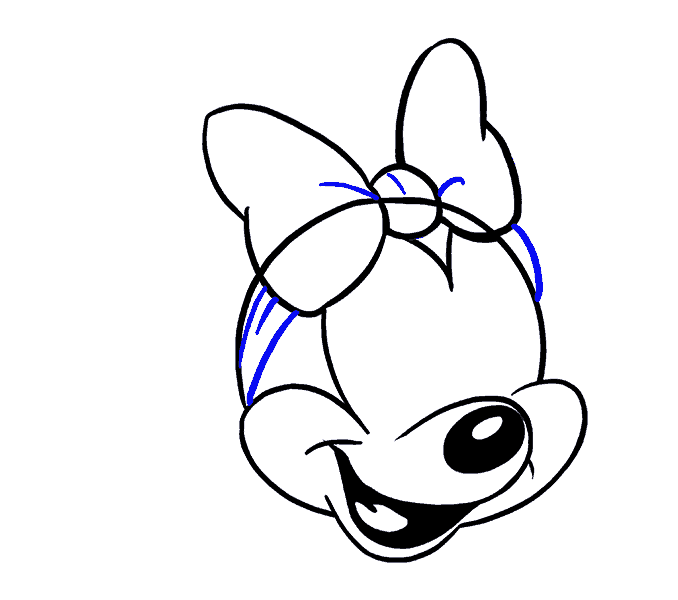 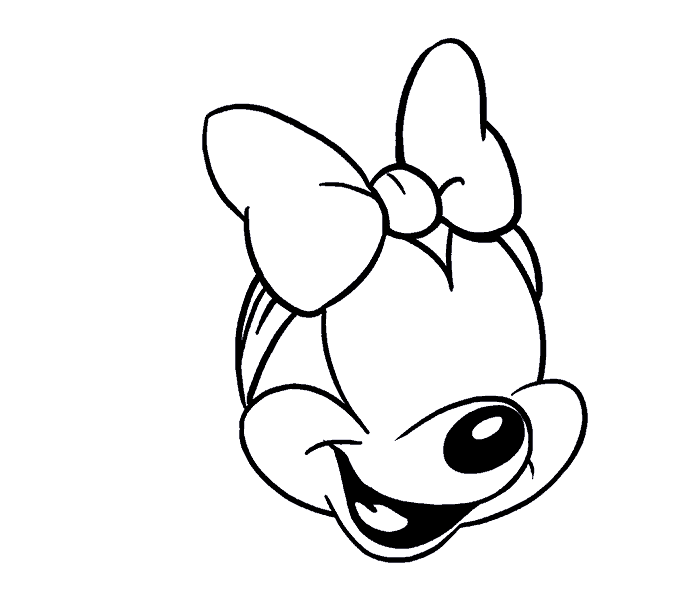 Erase the guide lines from the bow. 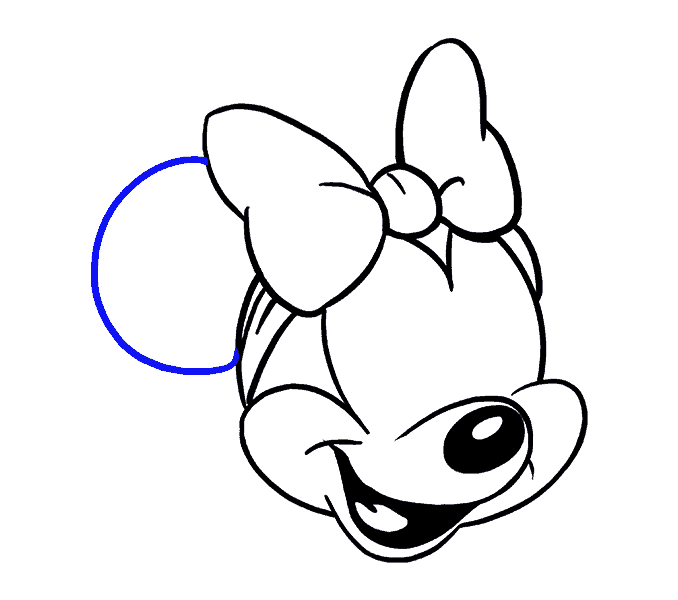 To draw Minnie's ear, use a curved line to enclose a circular shape from the bow to the head. 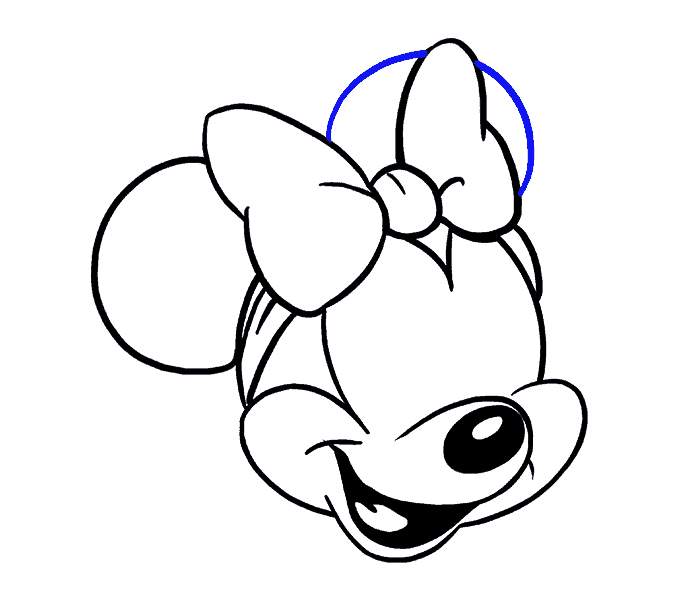 Repeat on the opposite side, allowing the line to pass behind the bow. 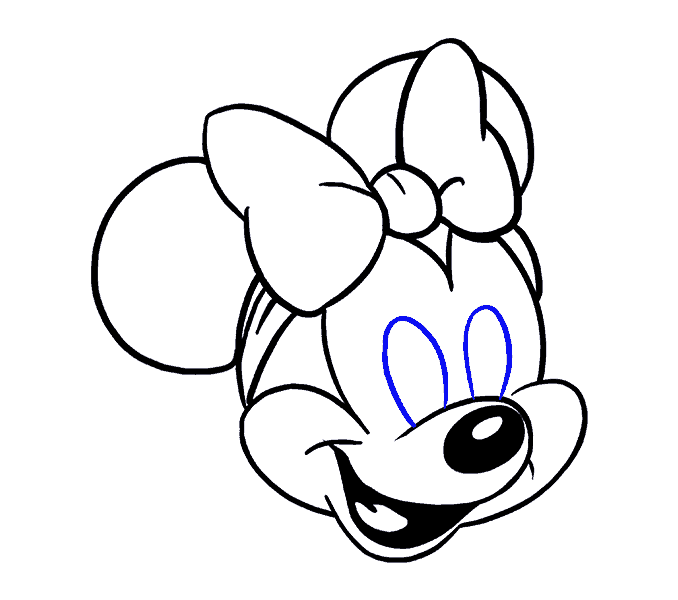 Draw Minnie's eyes using two long, curved lines atop the nose. Each eye will take the shape of a long, narrow oval. 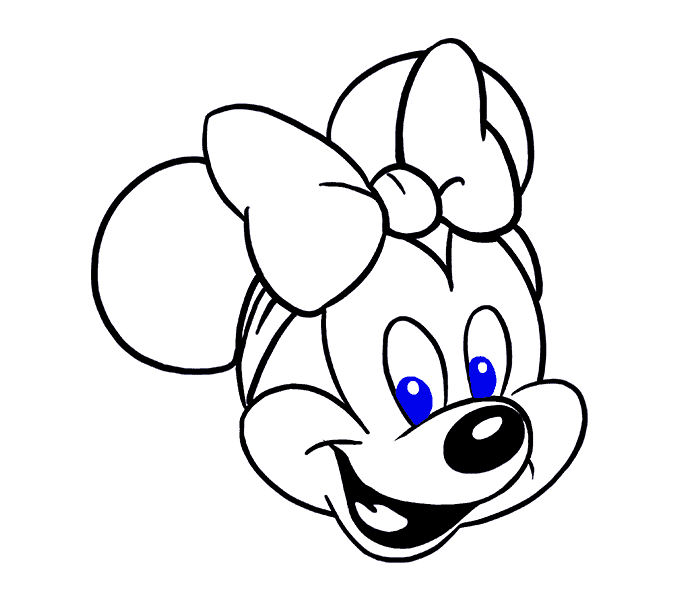 Enclose a circular shape within each eye, and draw a small circle within the shape. Shade between the shapes to form the pupils. 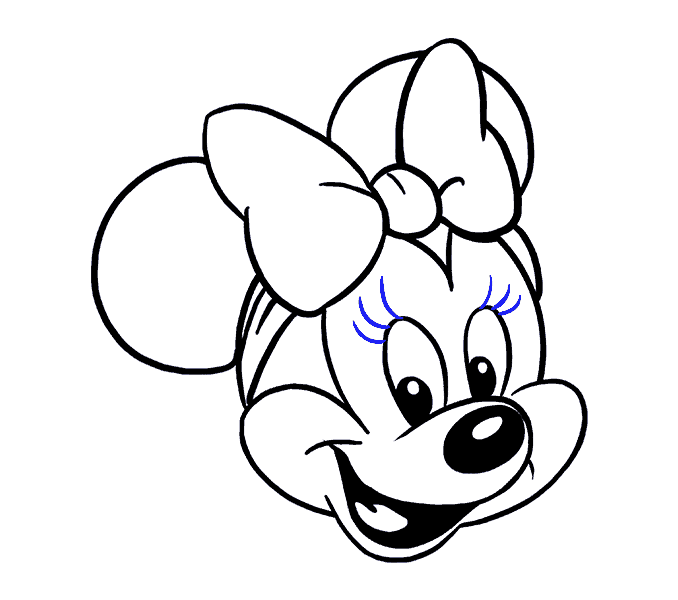 Draw Minnie's eyelashes by extending curved lines from the top of each eye. 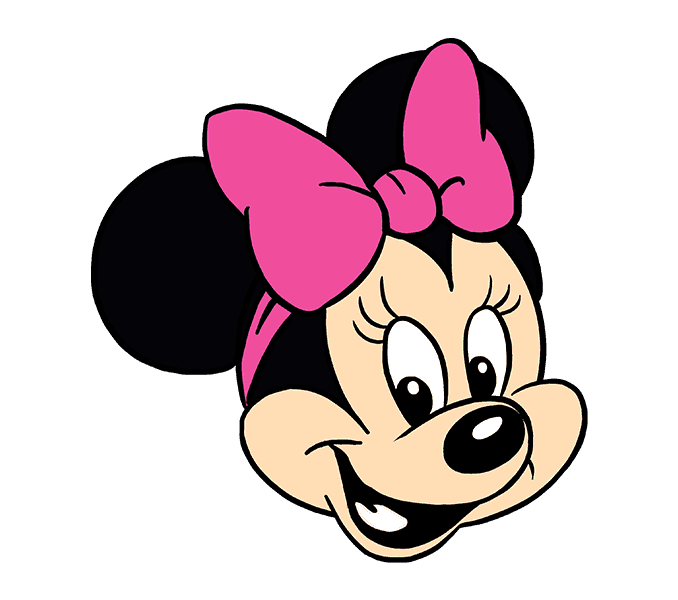 Color Minnie Mouse. She is typically drawn with black ears, a cream colored face, and a pink or red bow.