The beard is the facial hair grown on a man's chin and cheeks. The Encyclopaedia Britannica calls the beard a "badge of manhood," as it appears only when a young male becomes physically mature.

The beard has been full of symbolism in many cultures throughout history. Some cultures prescribed that men begin wearing a beard when they reach a certain age or marry. Various religions, including Sikhs, Jews, Muslims, and some Christians, consider the wearing of the beard as a matter of religious observance. At certain times in history, laws about wearing beards, their care, or not wearing them have been enacted, usually when the beard marks social status or profession.

Beards appear in statues, carvings, paintings, and other artwork from antiquity. From these, we can learn about the habits of the cultures depicted. The ancient Egyptians, for example, shaved all the hair from their bodies, as they considered it a matter of cleanliness. Yet, the Pharaoh wore a pointed beard strapped to his chin.

In the visual arts, the beard may be used to show the passage of time. Many cartoons include the growth and graying of the beard in time-lapses of aging. Another example is the character played by Tom Hanks in the film Castaway. If much time has passed in the wilderness or away from the normality of everyday life, the shaving of the beard may represent a return to it.

Would you like to draw a cartoon of a man with a beard? This easy, step-by-step cartoon drawing tutorial can help. All you will need is a pen, pencil, or marker and a sheet of paper. You may also wish to color your finished sketch.

Step-by-Step Instructions for Drawing a Beard

1. Begin by drawing the man's eyes. Use curved lines to enclose the rounded shapes. Then draw a circle to form the pupil within each eye.

2. Use curved lines to contour the bridge of the nose between the eyes and the lines under the eyes. Use a series of curved lines to sketch each eyebrow. Notice the tuft at the inner corners.

3. Draw two curved lines to outline the nose. Draw a curved line between them to form the tip of the nose, and double the ends back upon themselves. Shade these small shapes to indicate the nostrils. Then, outline the face and hair. Use a series of long and short curved lines, noting the jagged edges at the cheeks and above the brow.

4. Use a series of curved lines that meet at jagged points to outline the beard.

How to Draw a Human Heart

How to Draw a Brain

6. Use long curved lines to outline the hair on top of the head. Connect them to the ears on each side. Then, texture the hair with curved lines emerging from the center of the forehead.

7. Use a series of curved lines to outline the downward-facing "V" shape of the mustache. Note the narrow "U" shaped lines on each end.

How to Draw an Ear 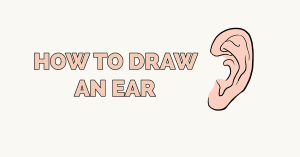 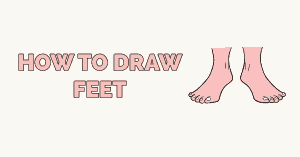 8. Use curved lines to outline the irregular shape of the beard below the mouth.

9. Use curved lines to outline the lips and contour the upper lip.

Color your cartoon caricature of a bearded man. You can make him old or young by coloring his hair and beard any color you may wish.

The Complete Beard Drawing Tutorial in One Image

How to draw: Beard - all drawing steps