"I mustache you a question..."

The mustache, sometimes spelled moustache, is hair on the upper lip. Throughout history, different mustache styles have fallen in and out of fashion. Often, the mustache was worn with a beard, but even ancient Egyptian artifacts show beardless mustaches. At times, laws regarding facial hair were even enacted, forcing men to either shave or not shave their mustache.

The mustache has many social connotations. The emergence of the mustache is connected with the male child's transition to adulthood. Throughout life, the mustache may symbolize maturity; often, mustached men are thought to be older than clean-shaven men of the same age. Certain religious adherents regard the mustache as a symbol of their faith.

Mustaches come in many different styles. The Dali and pencil styles are narrow, while the English and handlebar mustaches are long and curled upward at the ends. The Fu Manchu has long points that dangle beneath the chin. Imperial, horseshoe, and walrus mustache styles are bushy. The toothbrush style is kept just under the nose.

The longest mustache on record belonged to a man in India; it reached a length of 14 feet, or more than 4 meters. Certain celebrities and fictional characters are known for their mustaches. The video game character Mario is a notable example. In recent years, mustaches have shown up in popular culture, decorating everything from photo props and mugs to clothing and accessories. Each November, thousands of men grow mustaches to raise awareness for men's health issues.

Would you like to draw a cartoon mustache? This easy, step-by-step cartoon drawing tutorial is here to show you how. All you will need is a pen, pencil, marker, or crayon and a sheet of paper. You may also wish to color your finished drawing.

If you liked this tutorial, see also the following drawing guides: Celtic Warrior, Viking, and Wizard.

Step-by-Step Instructions for Drawing a Mustache

2. Use a long curved line to outline a teardrop shape just below the nose. This forms one side of the mustache.

3. Draw another teardrop shape, creating a mirror image of the first. This completes the mustache. Now, let’s turn our attention to the wearer’s face.

4. Enclose two round shapes within the nose, indicating the nostrils. 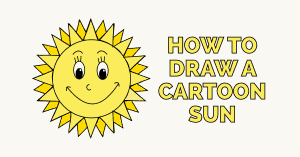 5. Draw two curved lines beneath the mustache. This outlines the open mouth and lower lip.

6. Above the nose, draw one round shape within another. This forms the first of the man’s eyes.

7. Use curved lines, connected at each end, to draw an eyebrow above the eye.

8. Draw an irregular circular shape; then draw a smaller shape within it. This eye should mirror the existing eye. 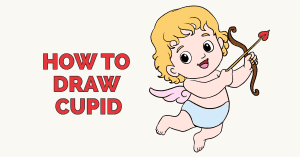 9. Use curved lines, connected on each end, to draw the remaining eyebrow.

Color your cartoon mustache. Typically, a man's mustache matches the color of his hair. You will notice that in our illustration, we've used various hues to shade the mustache and give it texture.

Who is that mustached man? Learn to draw your own cartoon characters.

The Complete Mustache Drawing Tutorial in One Image