Learn how to draw a great looking Jet with easy, step-by-step drawing instructions, and video tutorial. You can now easily create a beautiful Jet drawing. 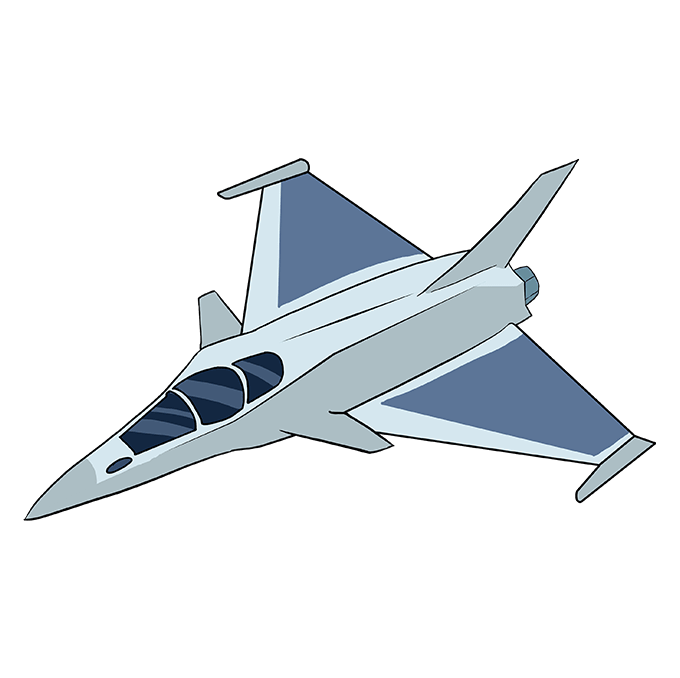 Fighter aircraft were first used in war during World War I, barely a decade after the invention of the airplane. The jet aircraft was invented in 1939. It soon became a staple among both military and commercial aircraft.

How does a jet engine operate? The engine first sucks in air with the help of a rapidly spinning fan. The blades of the compressor then squeeze the air, increasing the pressure. This air is then mixed with fuel and ignited with a spark. The burning gasses shoot out of the back of the engine, pushing the plane forward.

Jets have often appeared in popular culture, including songs and movies. The concept of fighter jet flight was romanticized in the 1986 action film Top Gun, the television series JAG, various anime cartoons, as well as countless others.

Would you like to draw a sleek fighter jet? This easy, step-by-step drawing tutorial is here to show you how. All you will need is a pencil, an eraser, and a sheet of paper. You may also wish to color your finished drawing.

If you liked this tutorial, see also the following drawing guides: Airplane, UFO, and School Bus. 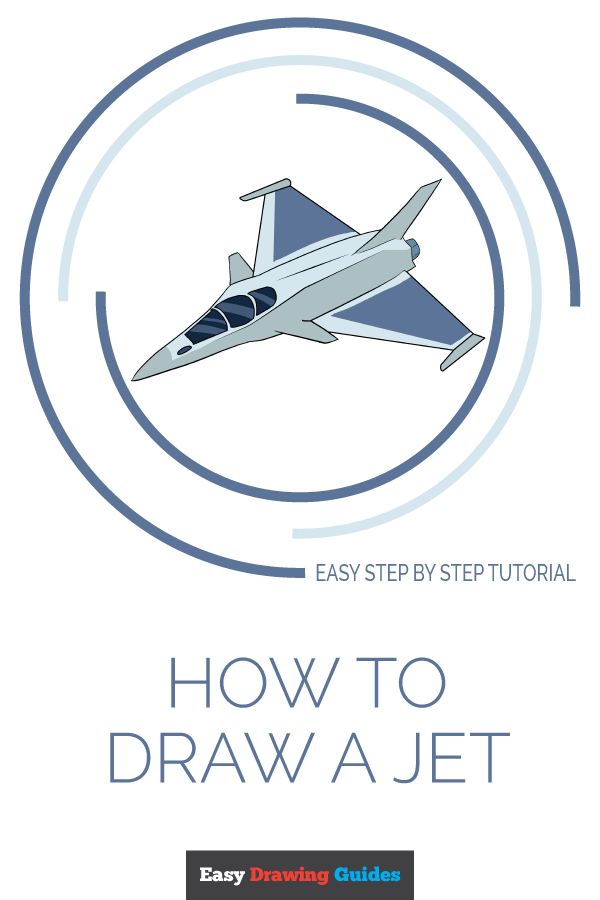 ​Step by Step Instructions for Drawing​ a Jet Plane 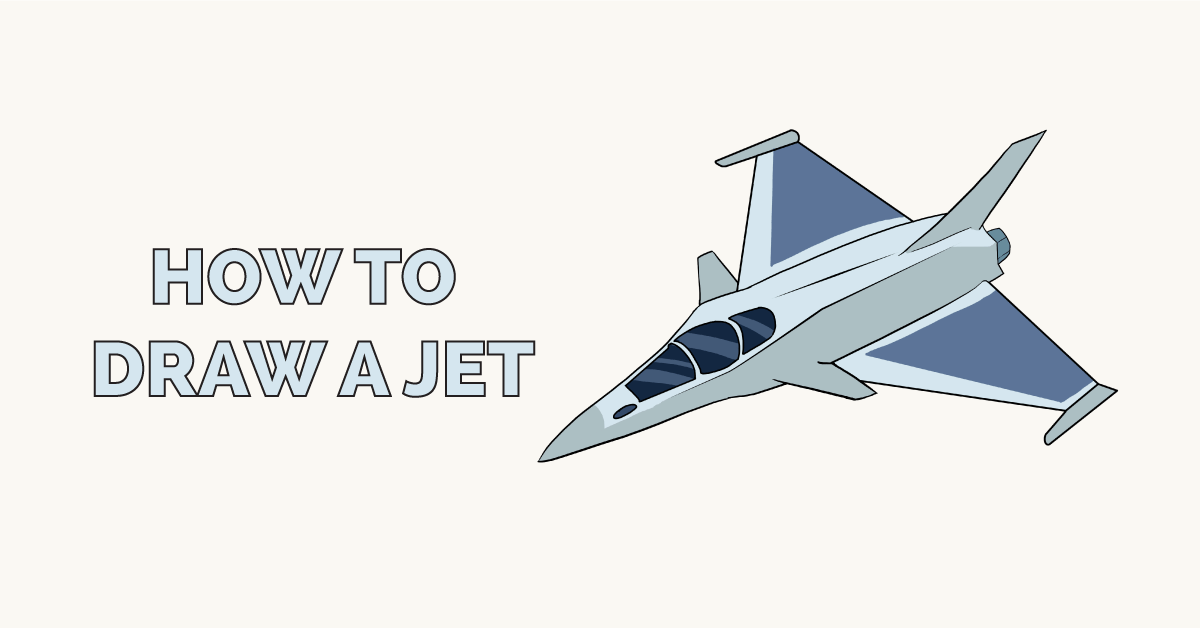 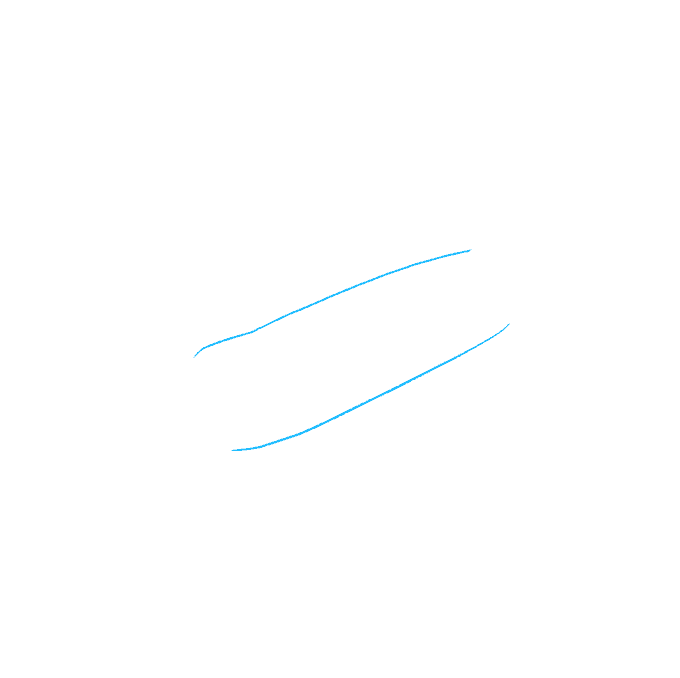 1. Begin by drawing two diagonally slanted curved lines, roughly parallel to one another. This begins the body, or fuselage, of the jet. 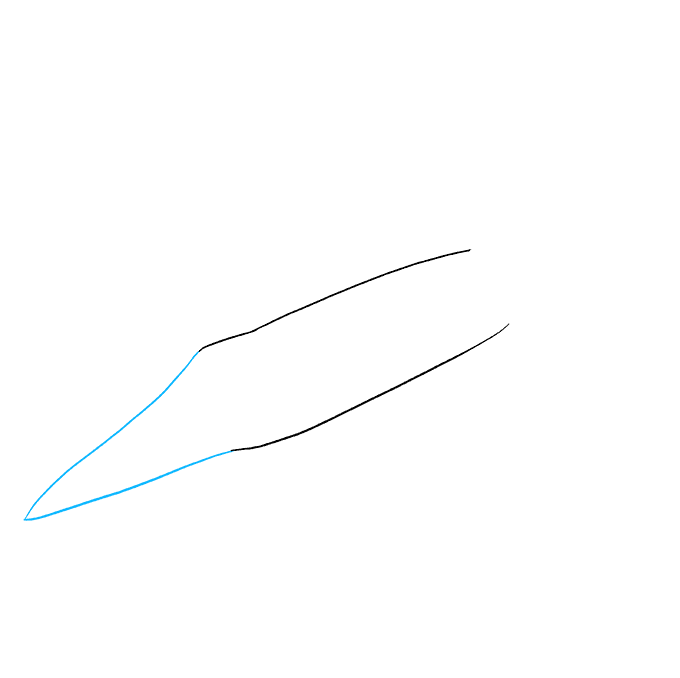 2. Connect the lines drawn in the previous step by extending two long curved lines and allowing them to meet in a point. This forms the nose of the jet. 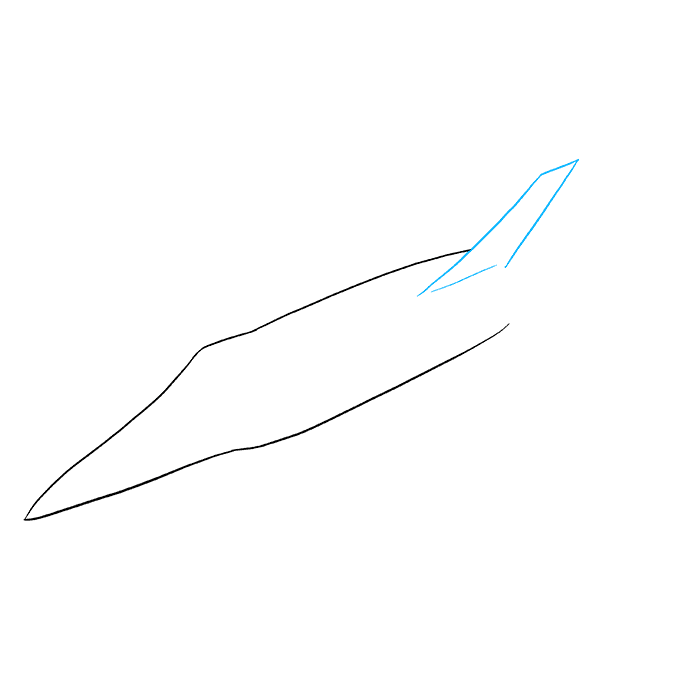 3. Next, draw the upper portion of the tail, also called the vertical stabilizer. Extend two lines on a vertical slant from the back of the jet. Connect them at the top and bottom using straight lines. 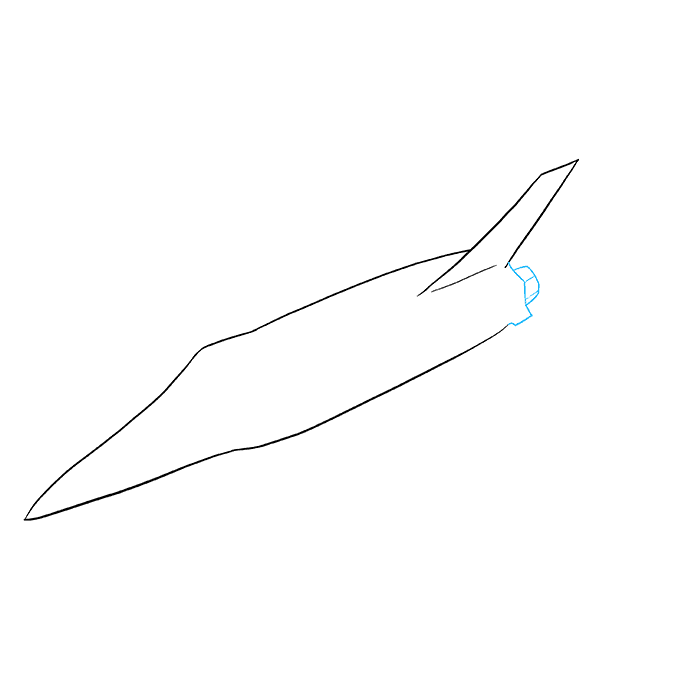 4. Use a series of straight lines to enclose the rear of the fuselage. Then, enclose a rounded shape using a curved line. Band the shape with short lines. This forms the nozzle, or rear portion, of the jet engine. 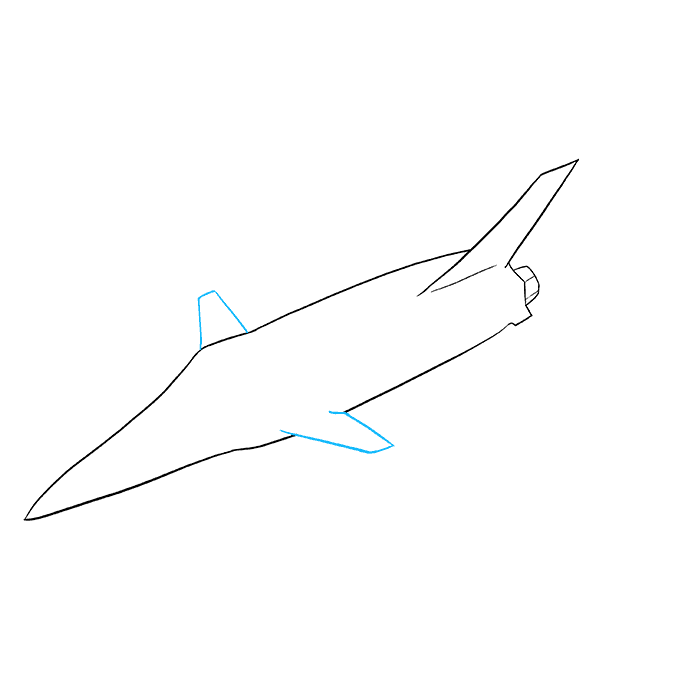 5. Next, draw the front portion of the wings, erasing guide lines as necessary. Extend two straight lines from each side of the jet, and connect them using a short straight line. Notice that the winglets are roughly triangular in shape. 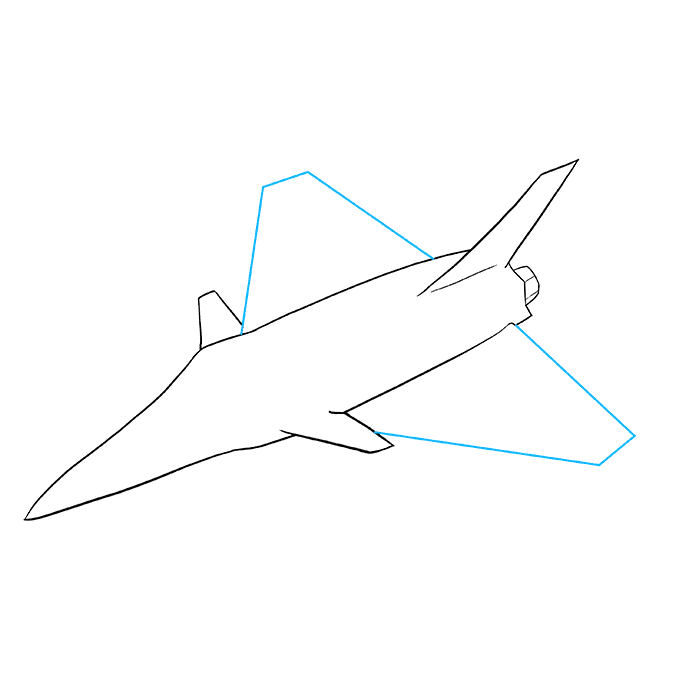 6. Draw the wings. Use three straight lines to enclose the wing on each side of the jet. Each wing should resemble a triangle with one of its corners removed. 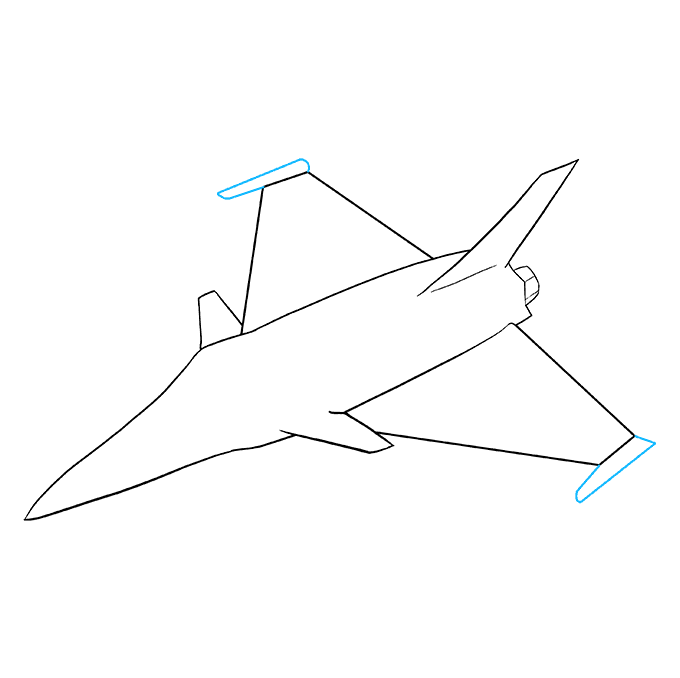 7. Draw the winglets at the tips of the wings. Extend a straight line from the wing, and another parallel to it. Connect the lines at each end. 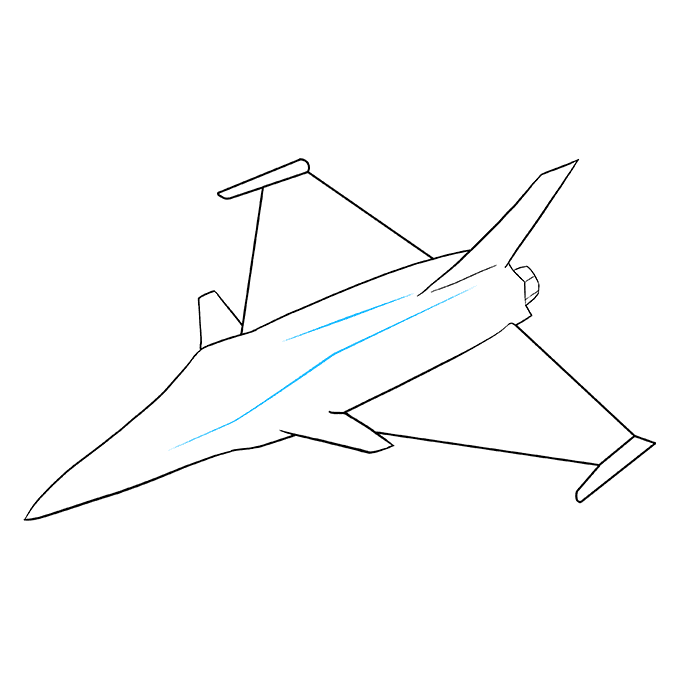 8. Contour the body of the jet by drawing long curved lines down the middle. 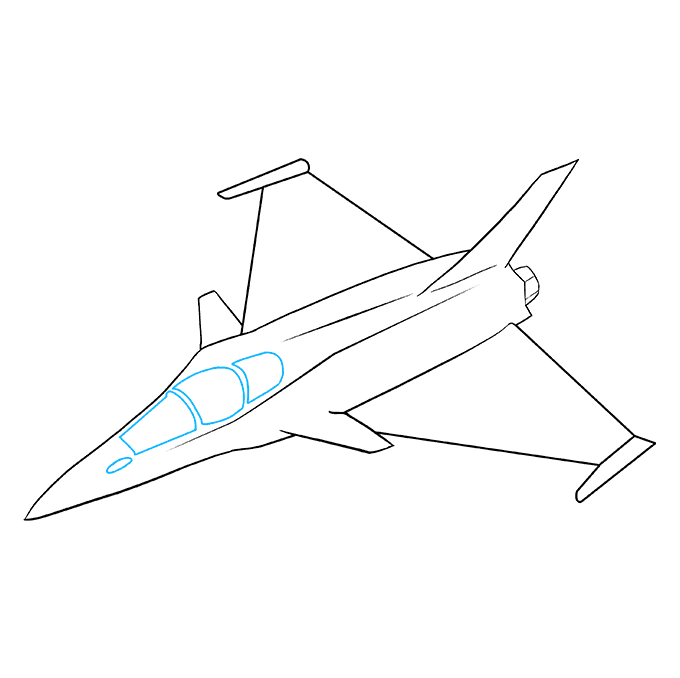 9. Draw the windows of the cockpit. Enclose a number of irregular shapes.

Color your jet. Many fighter jets such as this one are silver or grey in color, but they also come in a multitude of shades. Stealth jets such as the Lockheed SR-71 Blackbird may be solid black; the Blue Angels, the U.S. Navy's flight demonstration squadron, pilot blue and yellow jets; and historically, many pilots have painted various pictures on the sides of their aircraft.

Our selection of Object Drawing Guides will put you on the fast track to transportation drawing fun. There, you'll find vehicles such as planes and trains, boats and ships, cars, trucks, buses, and even a UFO! 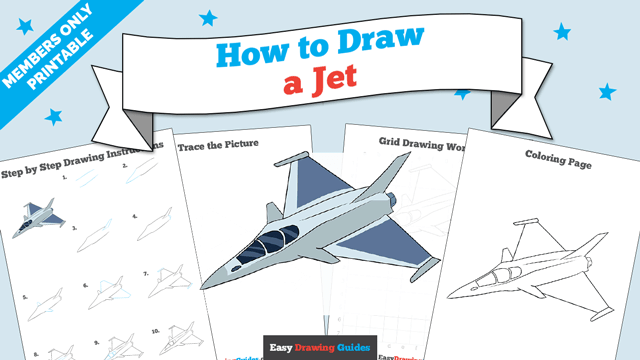