"Even a single lamp dispels the deepest darkness."
- Mahatma Gandhi

Lamps of various styles have been used for indoor lighting throughout history. The earliest lamps consisted of a vessel holding a combustible material such as oil, and a wick that soaked it up. The wick would be lit and slowly burn the fuel, giving off light.

Electric lamps, also called light fittings, luminaires, or light fixtures, were invented around 1870. As electricity became available to nearly everyone during the next century, electric lamps became a standard in homes across the world.

Lamps often feature in the background in art and animation, setting the scene of a home or office. Sometimes, they are personified as characters in their own right. Examples include Lampy and Plugsy from the animated film The Brave Little Toaster.

Some lamps, however, are considered artwork in themselves. This includes the Tiffany-style glass lamps of the 1800s and 1900s. Some of these can be viewed in museums, such as the Metropolitan Museum of Art in New York City, United States.

Would you like to draw a cartoon lamp? This easy, step-by-step cartoon object drawing tutorial is here to show you how. All you will need is a pen, pencil, or marker and a sheet of paper.

If you liked this tutorial, see also the following drawing guides: Lantern, Candle, and Light Bulb.

Step-by-Step Instructions for Drawing a Lamp

1. Begin by drawing a narrow horizontal oval. This will form the upper opening of the lampshade.

3.Draw a curved line descending from the opposite side of the oval, creating a mirror image. 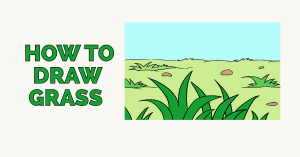 5. Draw vertical curved lines across the lampshade. This indicates the pleated material of many shades.

6. Outline the lamp base. Below the shade, draw two curved lines. Then, draw straight lines that diverge at opposite diagonal angles. Draw shorter lines beneath them that angle back toward the center. Then, connect these with a long curved line.

7. Use straight lines to decorate the base of the lamp with a zigzag pattern.

8. Draw a second zigzag pattern below the first.

9. Extend a straight line from one side of the lampshade. Use straight and curved lines to enclose a four-sided shape at the bottom. This is the pull-switch used to turn the lamp on and off.

This lamp is pretty groovy. What color should it be? Color it to match your favorite room.

Then, set the scene with more cartoon objects. You'll find couches, tables, and chairs, along with plenty of decor. You can even set the table for dinner or tea.

The Complete Lamp Drawing Tutorial in One Image