What is a menorah? A menorah is a candelabra, a type of candle holder with many branches. In fact, the word menorah simply means "lamp" in the Hebrew language. It is a symbol of Judaism and is used in religious rituals.

The menorah has a long history. A six-branched menorah is described in the Bible book of Exodus, and it adorned the ancient Jewish tabernacle (a place for worship that was easy to transport) and later the temple in Jerusalem.

When Jerusalem was invaded by Rome during the first century C.E., the Arch of Titus was erected by the Romans to commemorate their victory. It pictured goods taken from the temple, including a seven-branched menorah. This later became the symbol of the country of Israel after it was established during the 20th century.

A menorah with eight branches is still used in the celebration of Hanukkah, a Jewish holiday that marks the dedication of the second temple built in Jerusalem. During the eight-day festival, one candle is lit each night.

The central branch is a shamash, or "servant," used to light all the other candles. The Hanukkah menorah is referred to as a chanukkiyah in Hebrew.

The menorah has been listed "among the most widely produced articles of Jewish ceremonial art," from ancient carvings to modern paintings. An emoji image of the menorah has also been added to Unicode.

Would you like to draw a menorah? This easy, step-by-step drawing guide is here to help. All you will need is a pencil, an eraser, and a sheet of paper. You may also wish to color your finished drawing.

Step-by-Step Instructions for Drawing a Menorah

1. Begin by drawing a set of straight, vertical parallel lines. At the upper and lower ends of each line, draw a short line extending at a diagonal angle. Then, connect the lines on each end using a short straight line. This forms the central support of the menorah.

2. Draw two sets of parallel "U" shaped lines crossing the central support. Notice that the lower set of lines is much larger than the upper set. Draw diagonal lines extending from the top of each set of lines. Then, connect each pair of lines using a short line, forming the four candle holders.

4. Draw another large pair of "U" shaped lines. Extend diagonal lines from the ends, and connect them using short lines.

5. Erase guide lines from the central support of the menorah.

6. Draw a small rectangle at the base of the menorah. Beneath this, draw a longer but equally narrow rectangle. Then, draw a final longer rectangle beneath the previous. This forms the menorah's stand.

7. Begin to draw candles atop the menorah. For each candle, enclose a vertical rectangle using three straight lines.

How to Draw a Cute Pencil 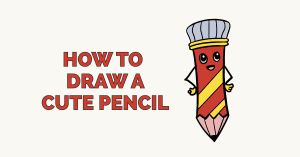 8. Continue to draw rectangular candles until each of the candle holders is filled.

Color your menorah. Menorahs are traditionally golden in color and topped with white candles.

Do you need more items for your celebration? Check out our objects drawing guides, where you'll find holiday decor, fireworks, and even enough food for a feast!

The Complete Menorah Drawing Tutorial in One Image

How to draw: Menorah - all drawing steps