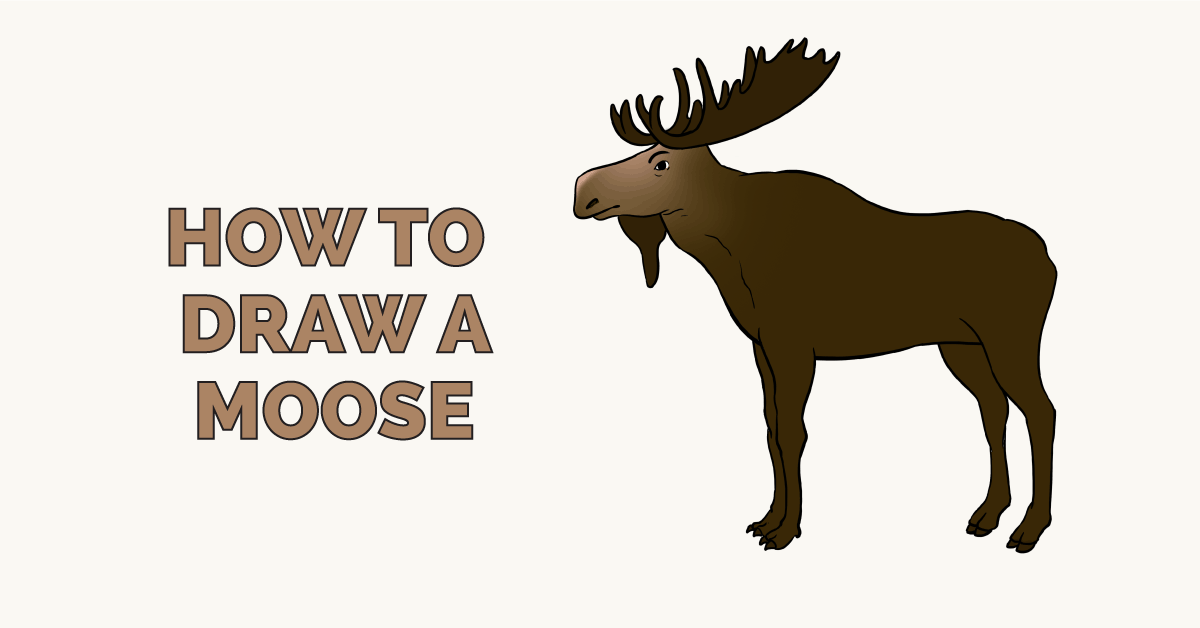 The moose is the largest species of deer in the world. It is native to the northern reaches of North America, Europe, and Asia. Moose are unique in that they may dive underwater for up to a minute to feed on aquatic plants.

The word "moose" is derived from moosh, which in the language of the Native American Algonquins meant "stripper and eater of bark." In Europe, moose are known as elk, while the term denotes a different species of deer in the Americas.

Did you know? A group of moose are not referred to as "mooses;" the word moose is both plural and singular.

In some areas, moose have been domesticated. The animals are both loyal and curious, and they are said to be more sure footed than horses on slippery, treacherous terrain.

The moose is often used as a symbol of the globe's northern regions, especially Canada. Characters based on the moose have graced animated films and series such as Rocky and Bullwinkle and Disney's Zootopia.

Step-by-Step Instructions for Drawing a Moose

1. Begin by drawing two shapes. First, draw a small circle, which will form the basis for the head. Then, draw a larger, irregular, roughly peanut shape. Notice that the portion of this shape nearest the head is larger than the other side. This shape will help you outline the body.

2. Detail the neck, head, and face. Connect the head and body using curved lines, forming the neck. Use a curved line within the circle to detail the shape of the head. Extend this line outward from the circle, and double it back upon itself so that it forms a rectangular shape with rounded corners. This is the moose's snout. Then, connect it to the head using another curved line, forming the lower jaw.

3. Draw the front legs. Use three curved lines to form the legs, one partially hidden by the other. Enclose the feet and toes using curved lines. Draw a curved line across the front of the foot to indicate the hoof.

4. Draw the back leg. Again, sketch the leg using two curved lines. Note that one line begins at the base of the animal's back, and the other crosses over into the body. Enclose the foot using curved lines, and use an additional line to differentiate the hoof.

How to Draw an Elk

5. Draw the far rear leg using a pair of curved lines. Enclose the foot, and mark the hoof using another curved line.

6. Erase the guide lines left by the original shapes, leaving a clean outline of the animal.

7. Draw the moose's characteristic antlers. Use a long curved line for the bottom of the antler. For the top, curve the line up and down in a wavy pattern. Notice the deep indentation of the antler near the head.

8. Using curved lines, enclose the portions of the far antler that can be seen above the first.

How to Draw a Grizzly Bear

9. Detail your moose. Enclose the beard, or dewlap, using a curved line. Detail the curves of the neck with additional lines. Shade the eye and nostril, and place a thick, short line above the eye to indicate the eyebrow.

10. Color your moose. Moose are generally brown in color.

Are you ready for your drawings to take you on more wild adventures? Give your moose a forest home, and fill it with additional woodland creatures, including bear, wolves, and squirrels.

The Complete Moose Drawing Tutorial in One Image

How to draw: Moose - all drawing steps 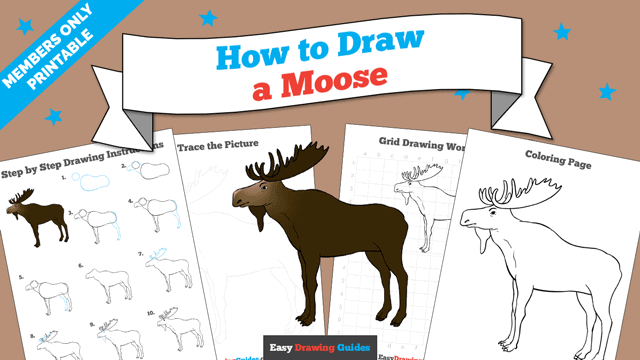