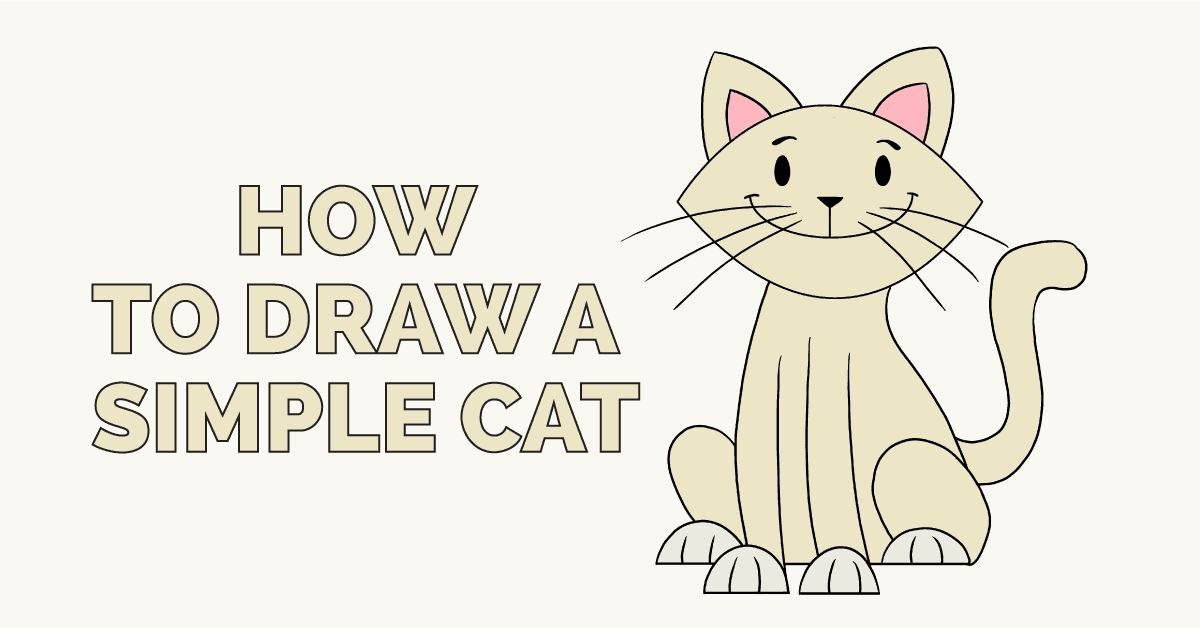 The house cat or domestic cat is a common sight around the world. The housecat is the smallest member of the cat family.

They make great pets, but remain independent enough to survive on their own. Once-domesticated cats living in the wild are known as feral cats.

Cats were first domesticated thousands of years ago. Mummified cats and carvings of cats have been discovered in the tombs of ancient Egypt.

Did you know? A group of cats is called a clowder or glaring. Cats may be small, but they are mighty hunters. On one small island near New Zealand, the first European settler brought a house cat with him.

The cat caught a bird, which he sent to a scientific organization for identification. By the time they wrote back requesting more specimens as they believed it to be a new species, the cat had eradicated the wrens from the island! A single cat hunted this bird to extinction.

You can learn to draw a simple cartoon cat. It's easy! Sharpen your pencils and grab an eraser.

Then, follow the step-by-step instructions in this cartoon animal drawing tutorial. You'll use simple shapes to create your meow-sterpiece! 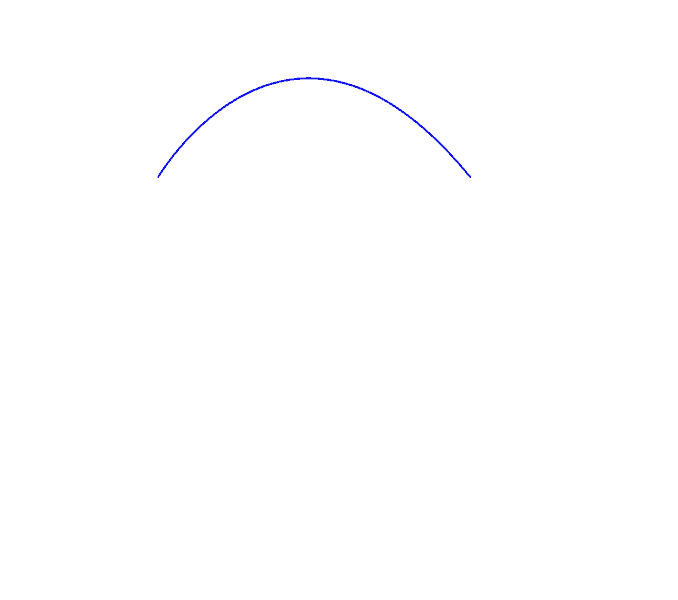 1. Begin by drawing a curved line. This will become the top of the cat’s head. 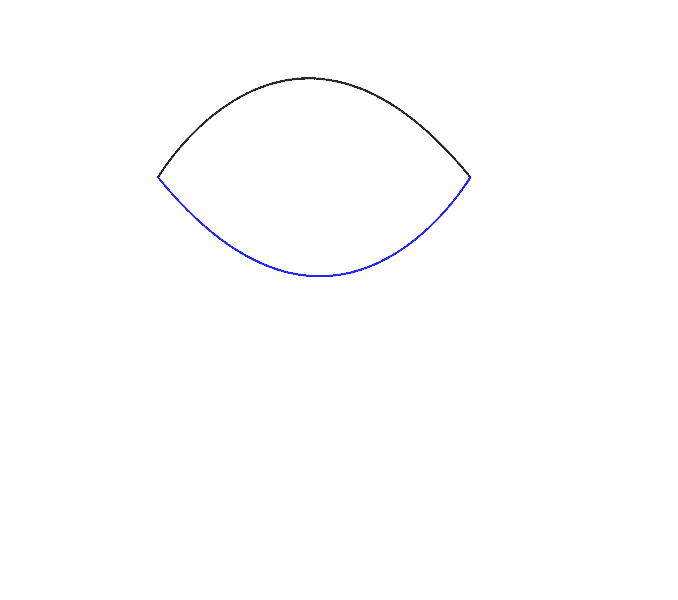 2. Draw another curved line to enclose a lemon shape, gently pointed on each end. This completes the outline of the head. 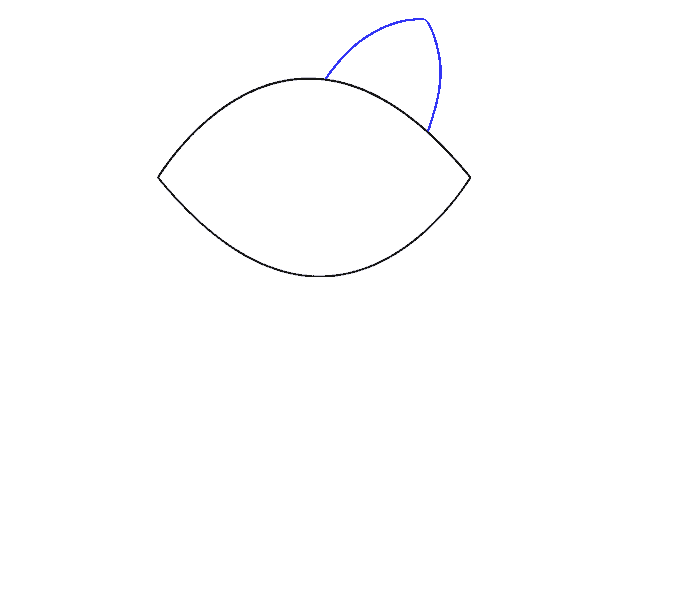 3. Use two curved lines to enclose the first of the gently pointed, triangular ears. 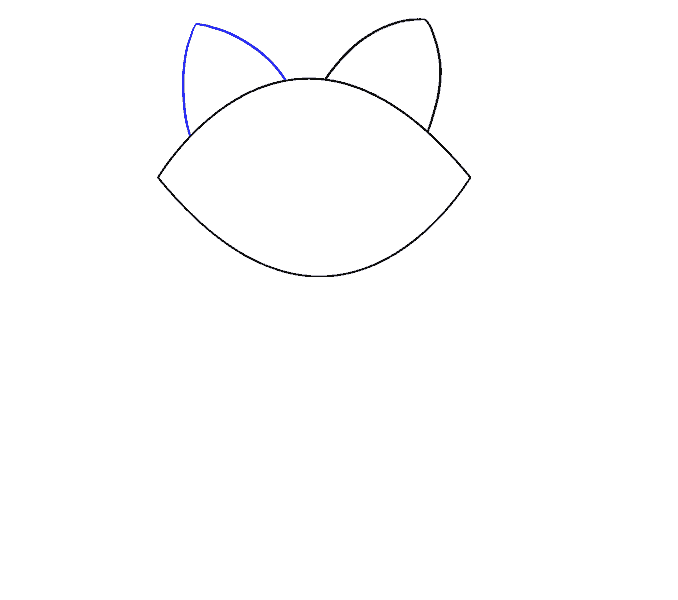 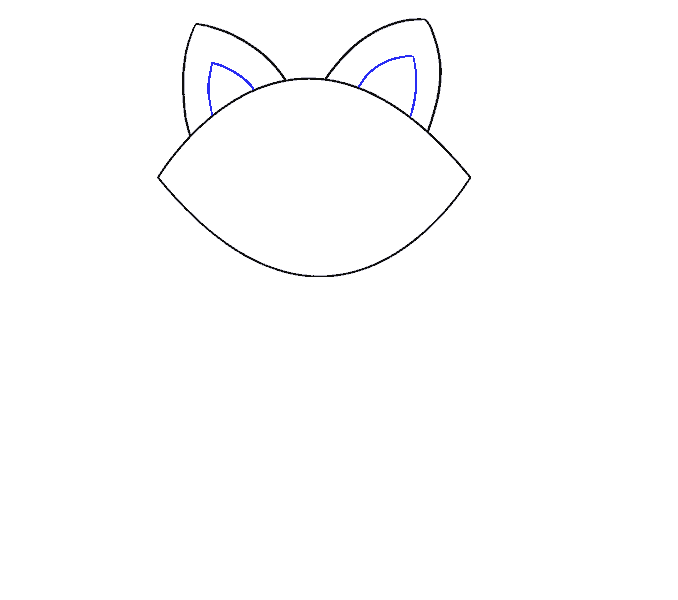 5. Draw a smaller triangle within each ear. 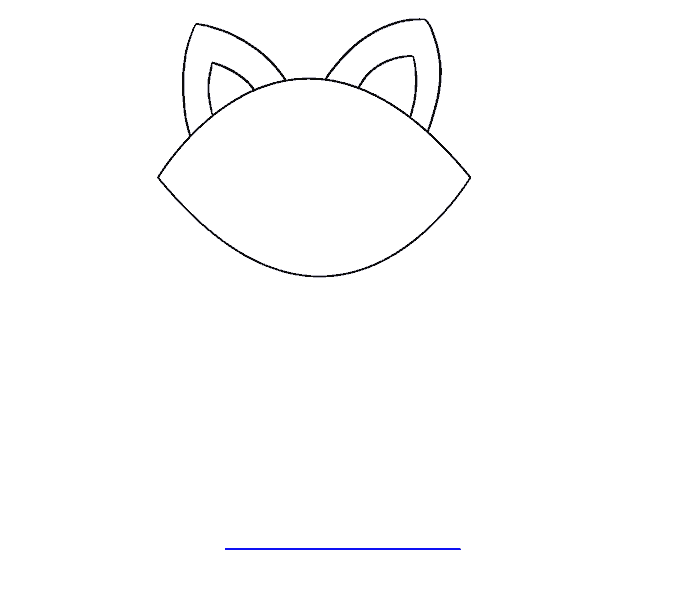 6. Draw a straight, horizontal line a distance below the cat’s head. 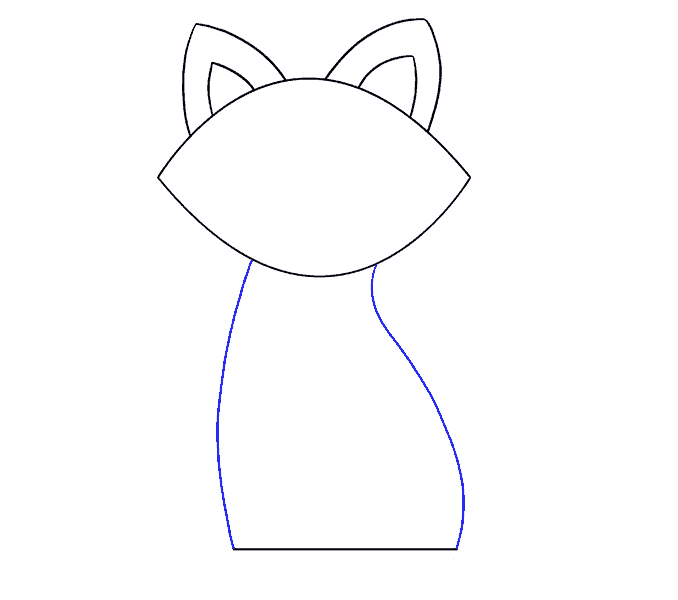 7. Draw a pair of curved lines between the head and the straight line, enclosing the feline’s body. 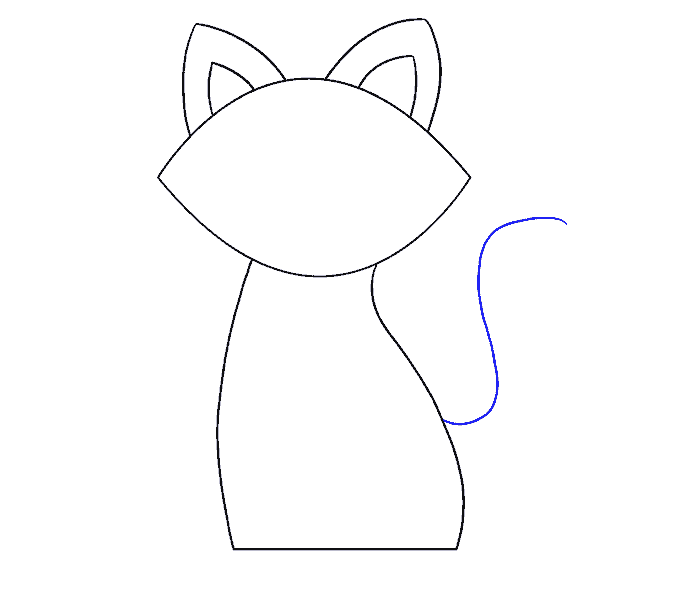 8. From the body, extend an “S” shaped curved line, beginning the outline of the tail. 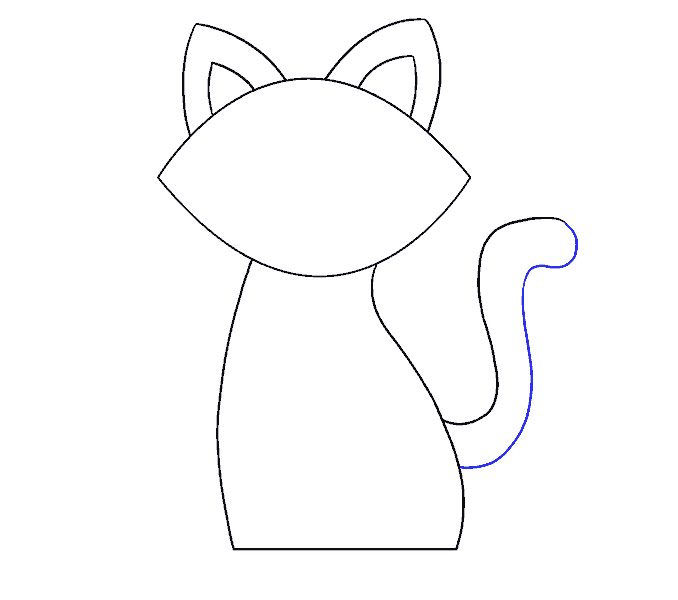 9. Draw a second curved line parallel to the previous. Connect them to enclose the tail. 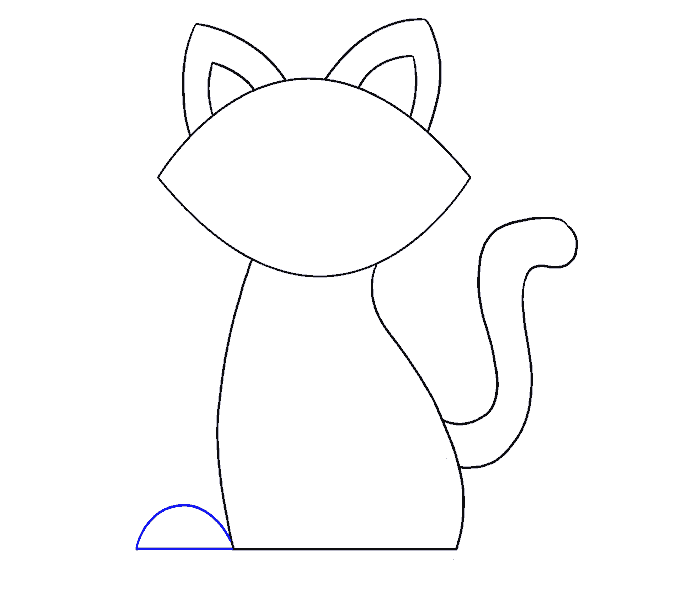 10. Use a straight line and a curved line to enclose a half-circle shape. This is the first of the cat’s feet. 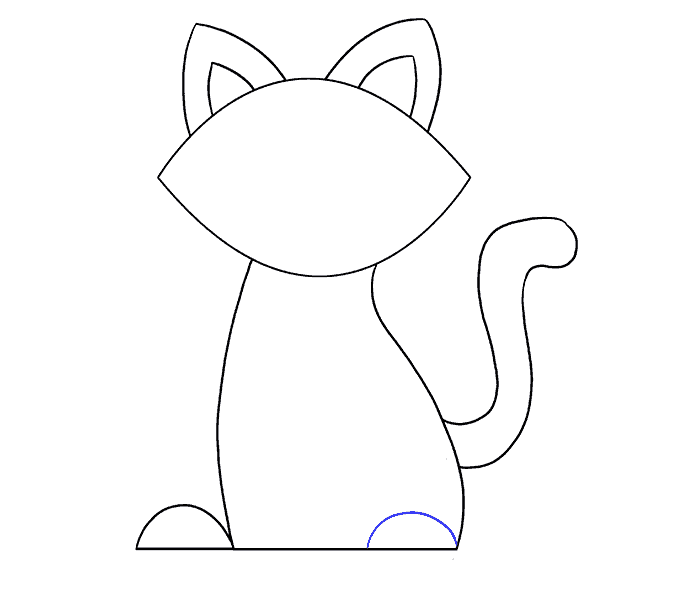 11. Use a curved line to enclose a half-circle shape within the outline of the body, forming another foot. 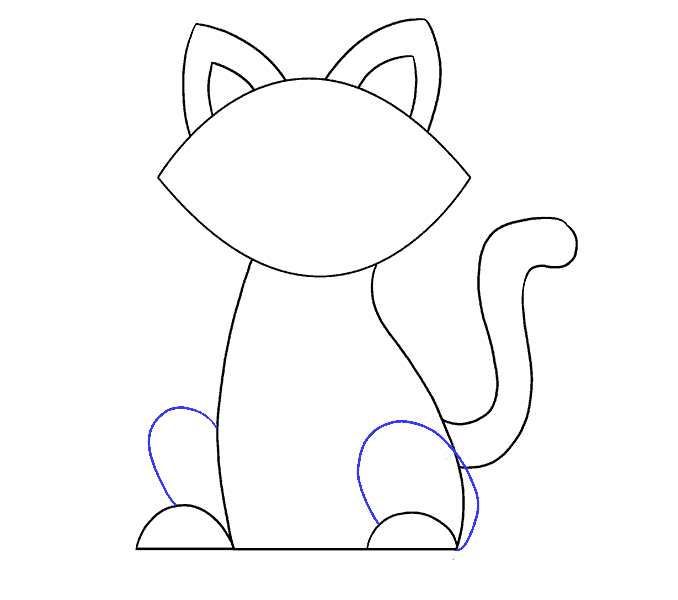 12. Use curved lines to outline rounded shapes above the feet. These are the cat’s rear legs. 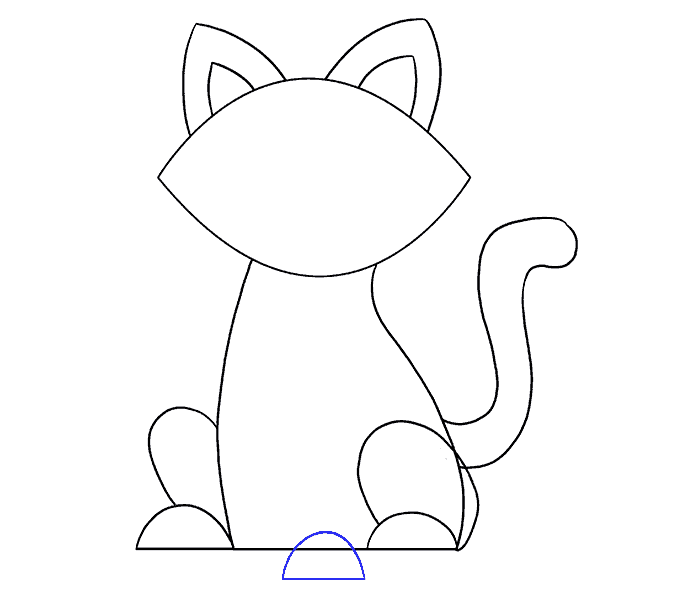 13. Draw another half-circle overlapping the bottom of the body, forming another paw. 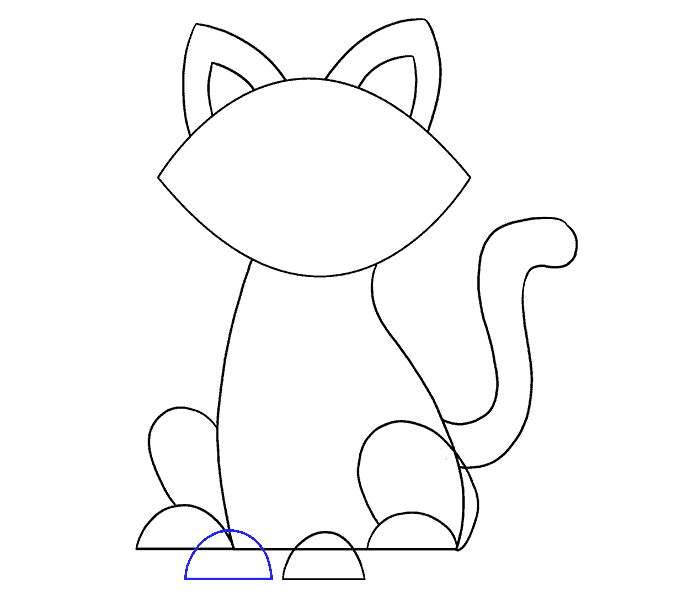 14. Draw another half-circle paw overlapping the bottom of the body. 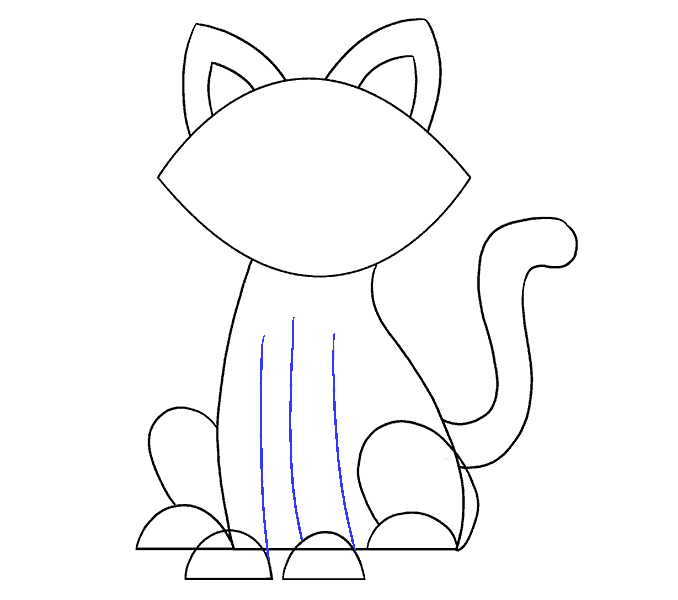 15. Draw three curved lines from the neck to the paws, outlining the front legs. 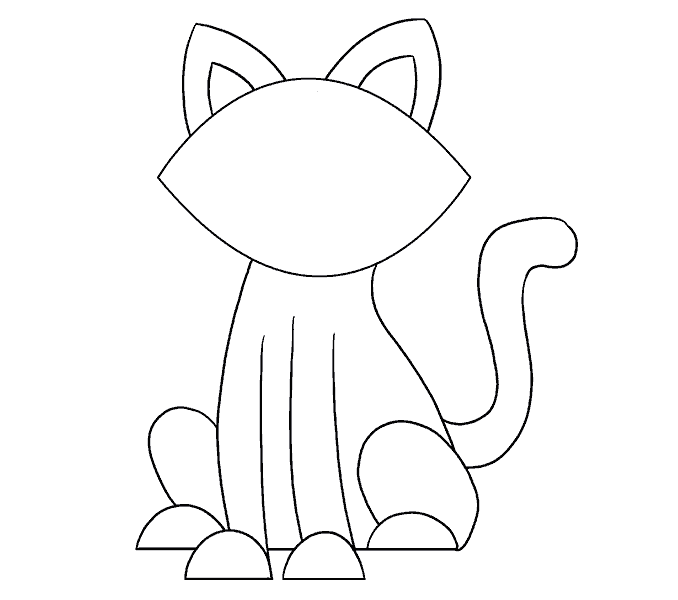 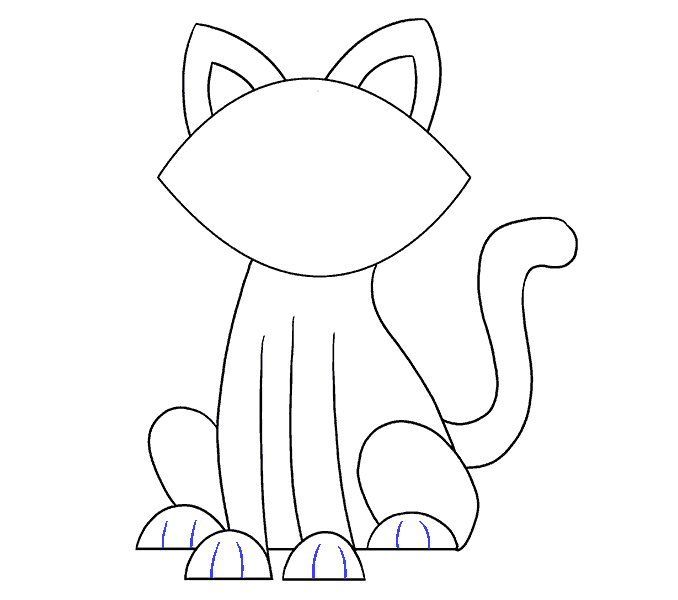 17. Draw curved lines across the paws, indicating the toes. 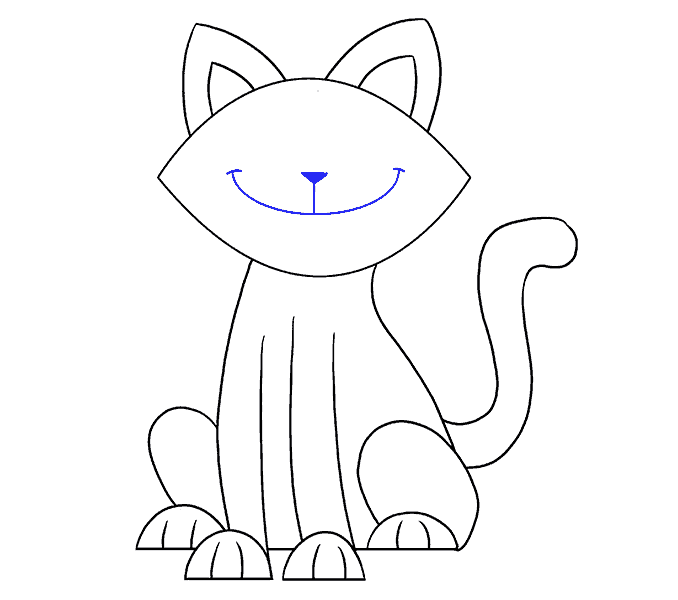 18. Draw a wide “U” shaped line across the face, with short lines at the corners. Above it, shade a small inverted triangle to form the nose. Connect the nose and mouth with a straight vertical line. 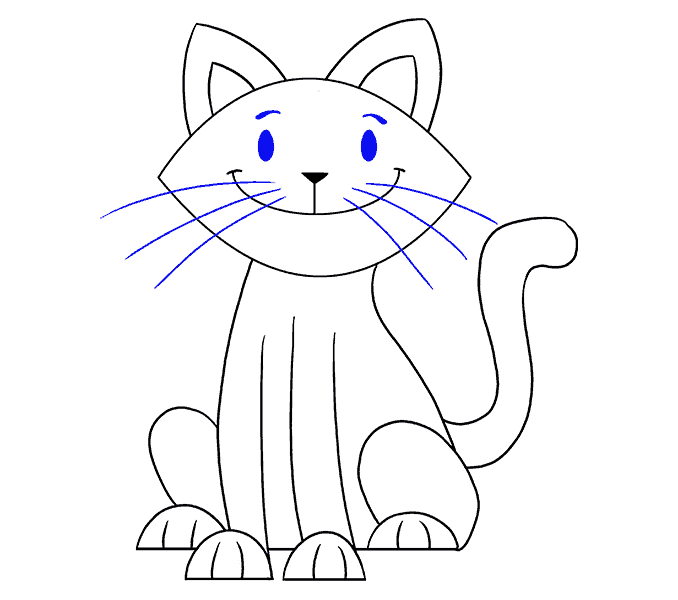 19. Draw long, curved lines from each side of the nose to form the whiskers. Shade two small ovals to indicate the eyes, with thick curved lines for eyebrows above it. 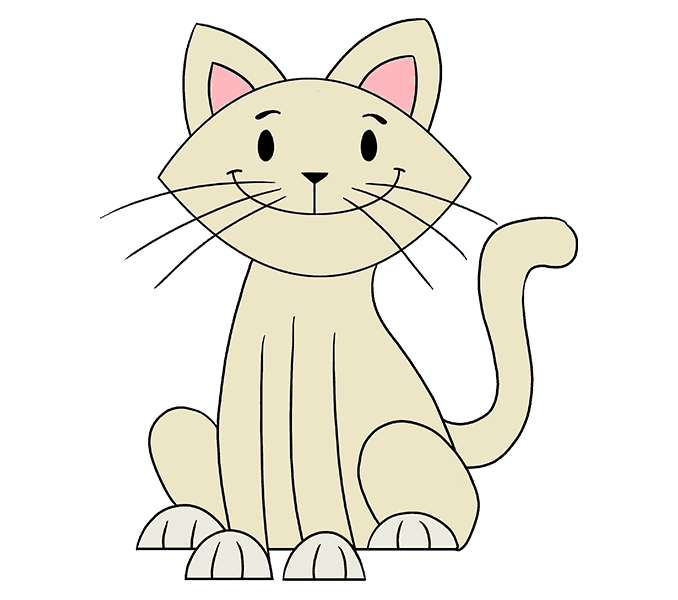 20. Color your fluffy cartoon kitty cat. We’ve chosen a cream color for our kitten, but cats come in many colors. Black, white, grey, orange, striped, or spotted - the choice is yours. Once you've mastered the simple cat, try your hand at drawing a simple dog.