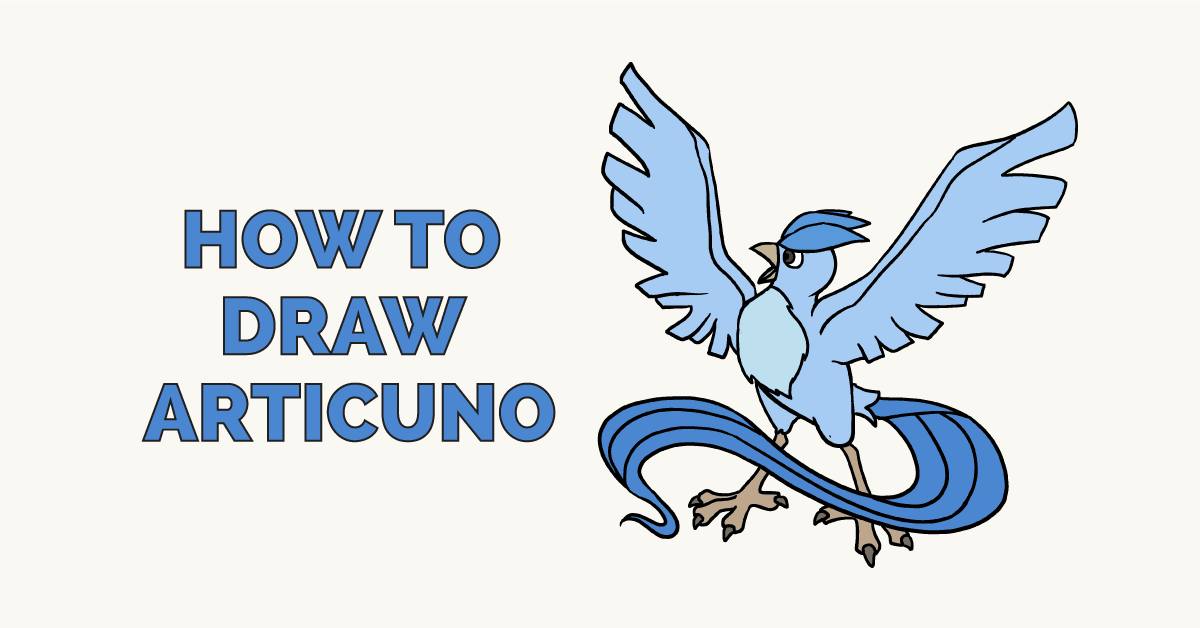 Articuno, the Freeze Pokémon, is a Legendary dual-type Ice and Flying Pokémon of Generation I. It is one of the three Legendary birds of the Kanto region, along with Zapdos and Moltres.

Articuno has not been observed to evolve to or from any other Pokémon.

Articuno's wings are rumored to be made of ice. When it flaps its wings, moisture in the surrounding air freezes, producing a snowfall. Did you know? In Japanese, Articuno's name means "Freezer."

Articuno is an extremely rare Pokémon, dwelling on cold mountain peaks. It first appeared in the Pokémonanimated series in an episode entitled "Moving Pictures."

Would you like to draw the majestic Articuno? All you will need is a pencil, an eraser, and a sheet of paper. You may also wish to color your finished drawing.

Articuno, I choose you!

If you liked this tutorial, see also the following drawing guides: Mewtwo, Charmander, and Bulbasaur.

1. Begin by drawing a small circle to form the bird’s head. Then, use curved lines to trace the irregular shape of the body below it.

2. Extend a pair of long, curved lines outward from just below the head. Allow the lines to meet in a point, forming the top edge of the wing. Then, extend three connected, curved lines from the wingtip to form an open rectangular shape. This is the bird’s first flight feather. Next, continue to draw series of three curved lines connected in a rectangular pattern to attach the wingtip to the body. Notice that the feathers become smaller as they near the body.

3. Draw the opposite wing. Again, extend a pair of parallel curved lines from the shoulder, just below the head. Allow the lines to meet at a point, forming the leading edge of the wing. Then, connect the wingtip to the body by drawing connected, open rectangular shapes.

4. Draw Articuno’s tail. Begin by drawing an “M” shaped line just above the base of the figure. From this, extend two curved lines, allowing them to meet in a point. Then, draw a long, curving line from each end of the previous shape. Narrow the gap between the lines until they meet in a point.

5. Texture the tail feathers. Draw several curved lines down the length of the tail.

6. Enclose a small curved triangle to form the beak. Then, enclose a roughly teardrop shape overlapping the top of the head, forming a crest of feathers. Use curved lines meeting in points to enclose other layers of the crest behind this shape.

7. Erase guide lines from the head and wings.

8. Draw a small triangle to form the lower portion of the open beak. Detail it with a short line. Draw a series of three circles, one within the next, to form the eye; shade the innermost circle. Finally, use a series of short, curved lines connected at jagged points to form the patch of feathers on the chest and belly.

9. Draw the legs. Begin by enclosing an inverted, rounded triangle to form the remaining hip. Then, extend a pair of parallel lines from each hip. Use curved lines to enclose each nearly rectangular toe. Draw a small triangular claw at the tip of each toe.

10. Color your Articuno. He is typically depicted in various shades of blue.

The Complete Articuno Drawing Tutorial in One Image

How to draw: Articuno - all drawing steps