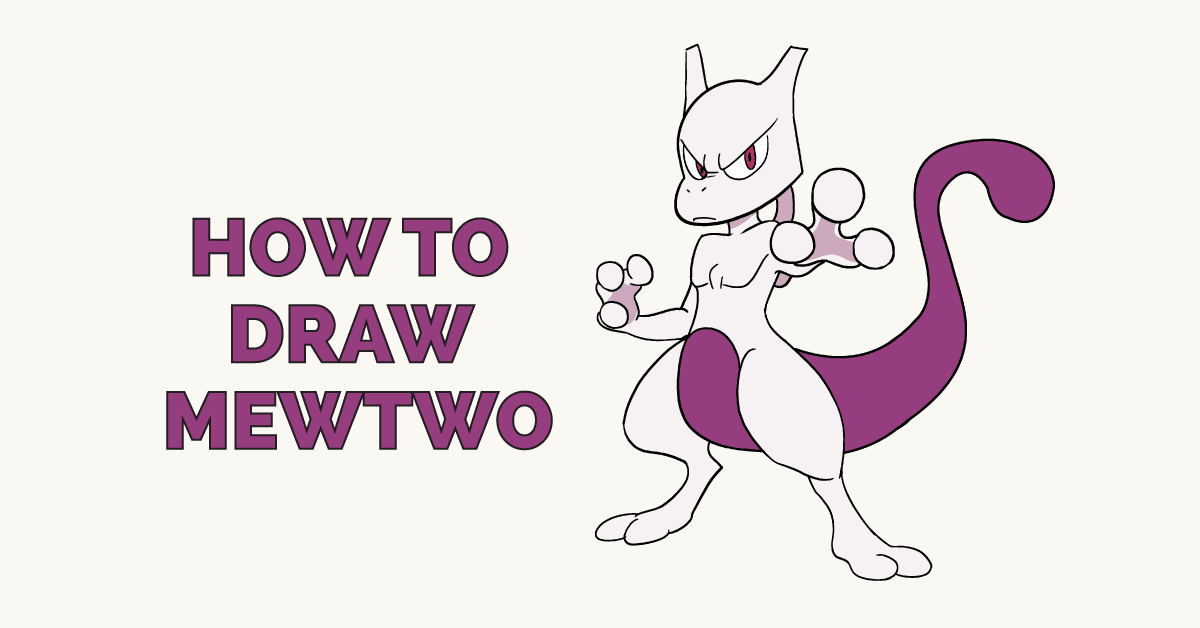 Mewtwo is a legendary psychic-type Pokémon from Generation I. He is part of the so-called "Mew duo" along with Mew. Both Pokémon were introduced in the animated film Pokémon: The First Movie, also called Mewtwo Strikes Back (1998).

Mewtwo does not evolve from any other Pokémon. Instead, it was created in a scientific laboratory, cloned from one of Mew's eyelashes.

Mewtwo does not normally evolve into other Pokémon, either, but it can mega evolve into Mega Mewtwo X or Y when exposed to the Mega Stones Mewtwonite X or Y.

Mewtwo is a very rare Pokémon, and as few as two specimens have ever been found. Trainers can encounter Mewtwo in Cerulean Cave after testing their skill at the Indigo Plateau.

Would you like to draw the dark and brooding Mewtwo? Now you can, with the help of this simple, step-by-step Pokémon drawing tutorial. All you will need is a pencil, an eraser, and a sheet of paper. You may also wish to color your finished drawing.

Mewtwo, I choose you!

If you liked this tutorial, see also the following drawing guides: Mew, Pichu, and Charizard.

1. Draw a circle to form the basis of Mewtwo’s head. Then, extend a short, straight line downward from one side of the circle. This forms the back of the head. Connect this line to the circle using a curved line, enclosing the snout in the process.

2. Draw Mewtwo’s ears. For each ear, extend a pair of slightly curved lines upward from the head. Connect them at the top using a short, straight line.

3. Extend two lines downward from the head to form the neck. Then, enclose an irregular, roughly peanut shaped form. This will become Mewtwo’s body.

4. Draw three circles in a triangular pattern, one overlapping Mewtwo’s shoulder. These are the tips of his fingers. Connect the circles to one another using short, curved lines, enclosing the hand. Use curved lines beneath the hand to connect it to the body, outlining the arm. Use two lines between the head and shoulder to enclose the tube on the back of his neck.

5. Enclose three circles to the side of the figure, forming the fingers of the other hand. Connect the fingers using curved lines. Then, use a series of curved lines to sketch the arm, connecting the hand to the body.

6. Draw Mewtwo’s legs. Form each leg using pairs of curved lines. Notice the width of the upper legs, and the pointed ankle. Connect each set of lines at the end using two “U” shaped lines to form the toes.

7. Erase guide lines from the head and body.

8. Use curved lines to detail Mewtwo’s chest and belly. Then, sketch his long tail. Use a long, curved line, and double it back upon itself. Notice how the tail is wider at its base and tip.

9. Add details to Mewtwo’s face. Draw the eyes using straight lines at a diagonal slant, with half circles enclosed beneath. Draw an oval to form the iris of each eye, and shade a small portion to form the pupil. Use short, curved lines to indicate the furrowed brow, frowning mouth, and nostrils.

10. Color your Mewtwo. He is usually light purple in color with a darker purple tail and underbelly.

The Complete Mewtwo Drawing Tutorial in One Image