Learn how to draw a great looking Catwoman with easy, step-by-step drawing instructions, and video tutorial. You can now easily create a beautiful Catwoman drawing. 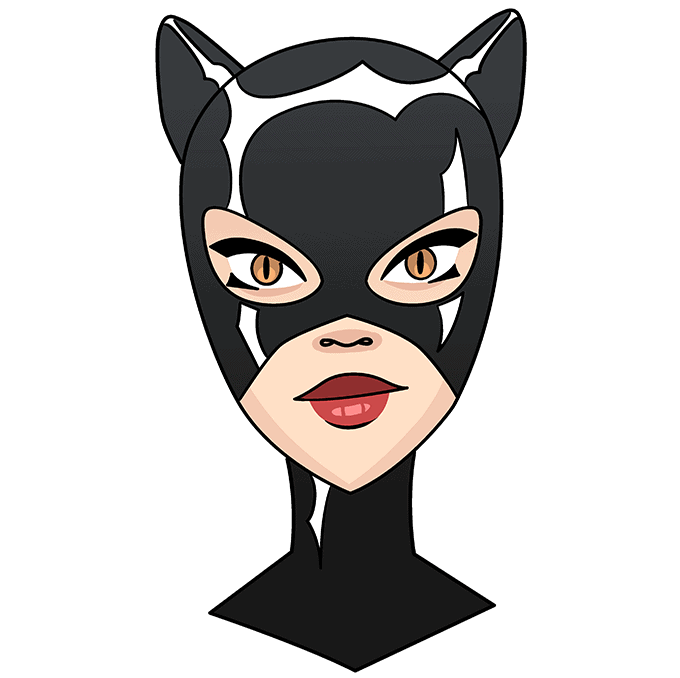 Catwoman is the supervillain alias of the fictional character Selina Kyle, and occasionally of other female characters. She first appeared as "the Cat" in DC Comics Batman #1 in 1940. She is a burglar in Gotham city, and her preferred weapon is a bullwhip. She wears a tight black suit and is often outfitted with spy gear.

Catwoman "is one of the Dark Knight's most enduring enemies" part of his rogues gallery. At times, though, she becomes an anti-hero rather than a villain, "doing the wrong things for the right reasons." She is also Batman's most enduring love interest.

In addition to comics, Catwoman has appeared in films, live-action series, animated series, video games, and merchandise. Rarely, she is accompanied by a sidekick known as Catgirl. She also has a daughter named Helene, of whom Batman may be the father.

Would you like to draw a cartoon portrait of the notorious Catwoman? This easy, step-by-step superhero drawing tutorial is here to show you how. All you will need is a pen, pencil, crayon, or marker and a sheet of paper. You may also wish to color your finished caricature.

If you liked this tutorial, see also the following drawing guides: Batman's Face, Cyclops from X-Men, and The Joker. 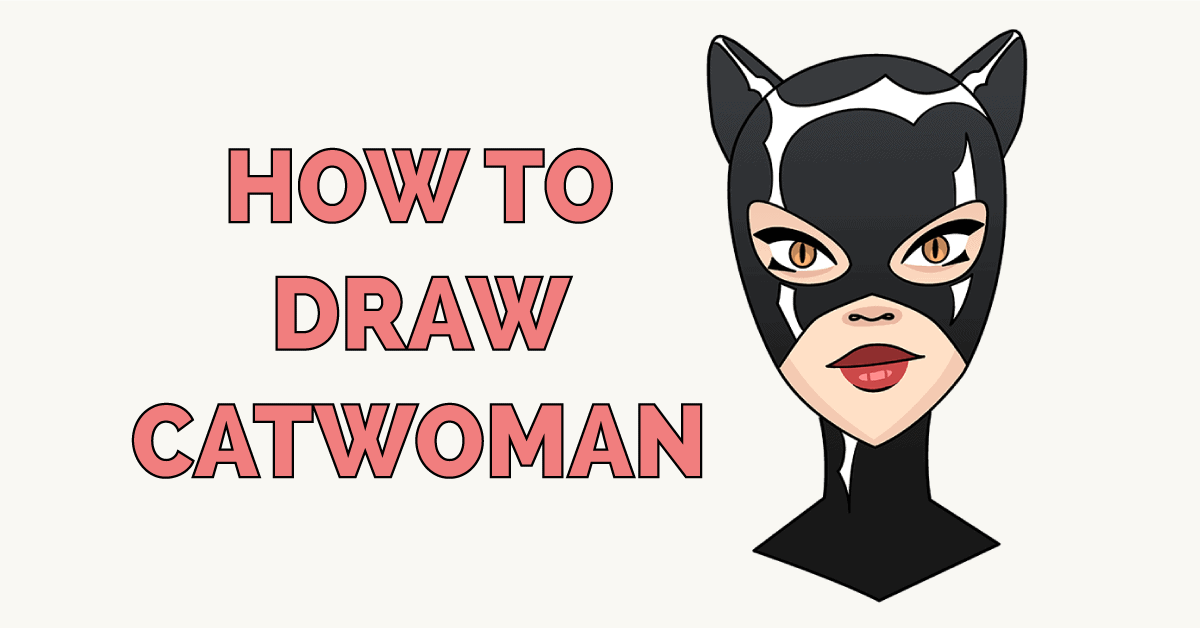 How to Draw a Great Looking Catwoman for Kids, Beginners, and Adults - Step 1 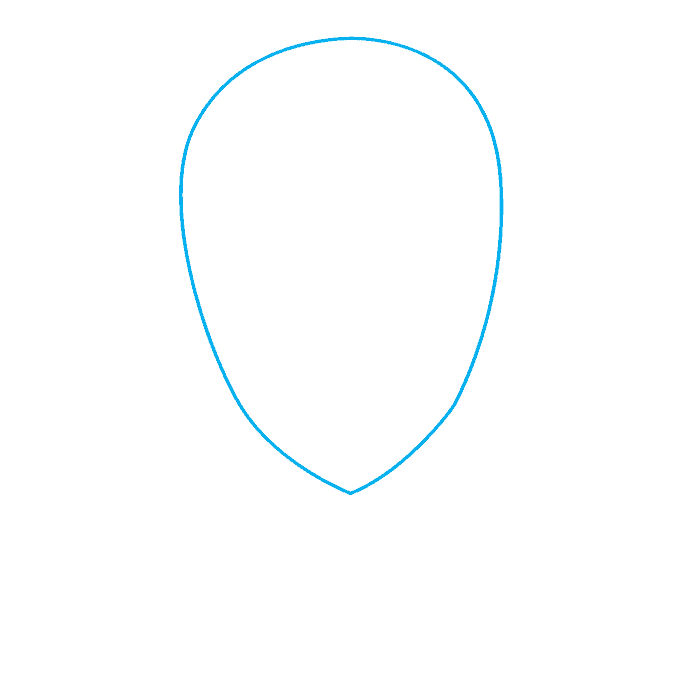 1. Begin by drawing a long curved line to enclose an inverted teardrop shape. This forms Catwoman’s head, with the point indicating the chin. 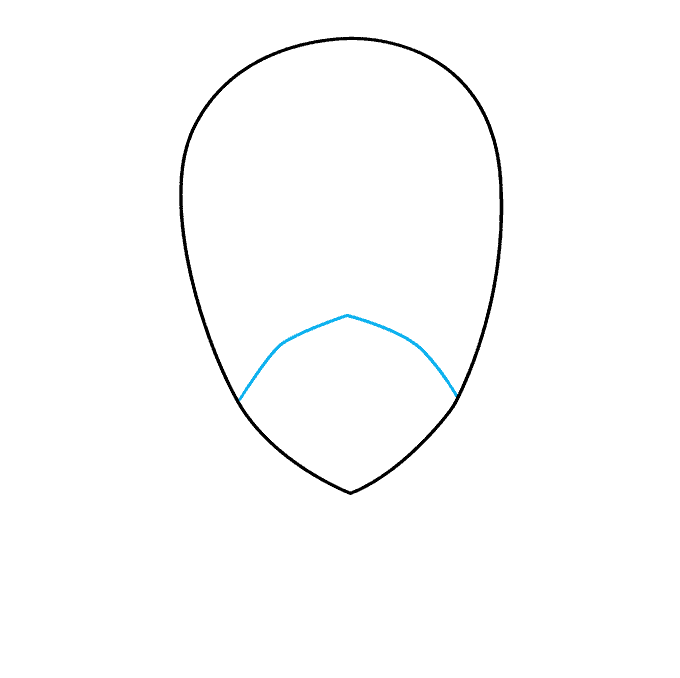 2. Draw two curved lines from the side of the figure to the center of the face. Allow them to meet at a gentle point. This outlines the opening in Catwoman’s mask. 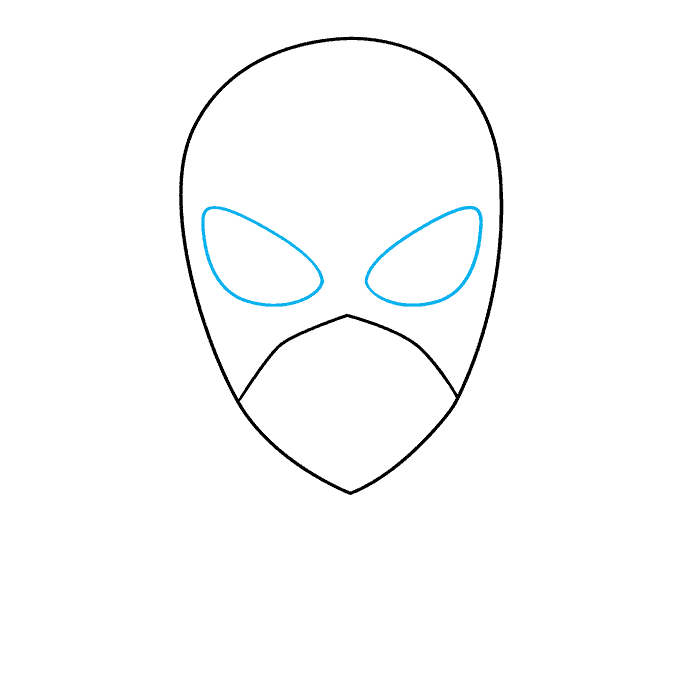 3. Use long curved lines to enclose two irregular rounded shapes. These are the openings for Catwoman’s eyes. 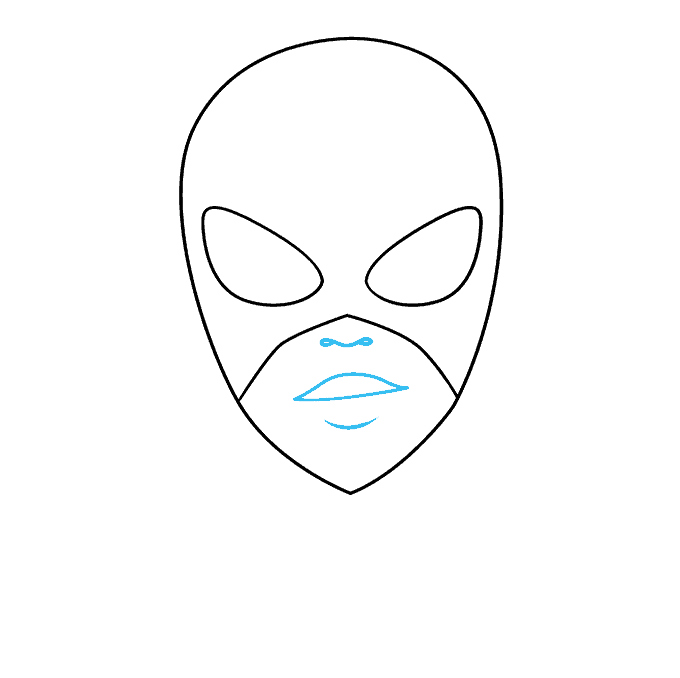 4. Below the top of the mask opening, draw a short curved line. At each end, double it back upon itself to enclose a tiny teardrop shape. This forms Catwoman’s nose and nostrils. Below the nose, use two curved lines to enclose the mouth, pointed at the corners. Below the mouth, draw a “U” shaped line to contour the chin. 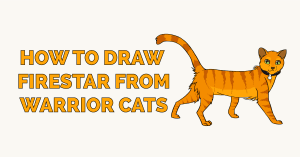 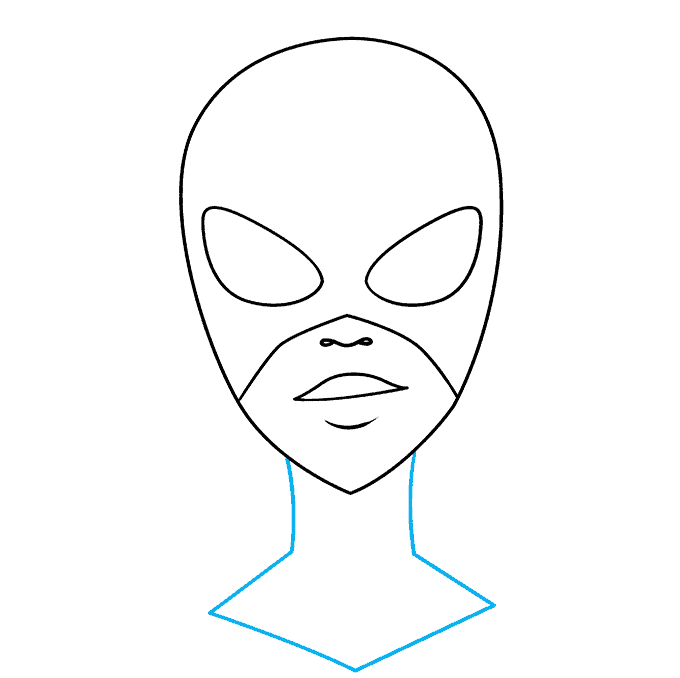 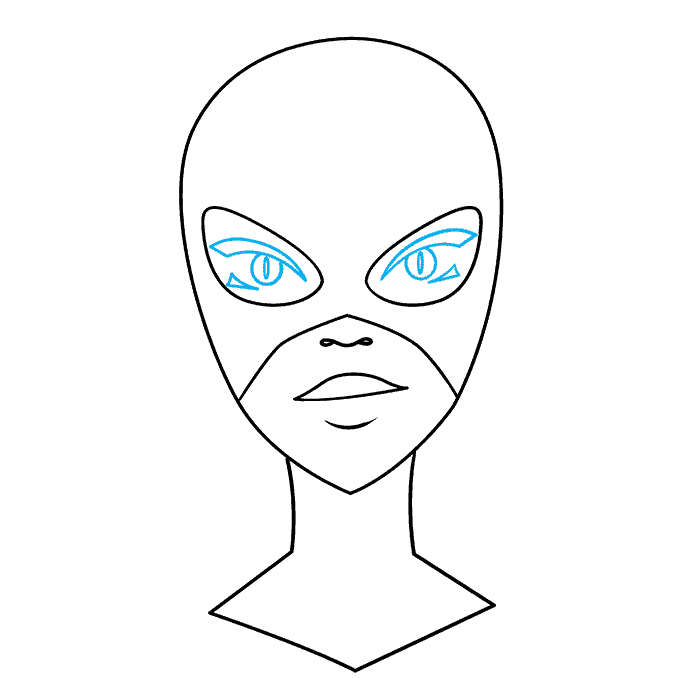 6. Detail the eyes. Use two curved lines, connected at a point on one end and by a short straight line on the other, to form the eyebrows. Below the brow, enclose a partial circle. Inside each circle, draw the slit-like pupil using two curved lines that meet at points on each end. To one side of the eye, draw a curved triangle. 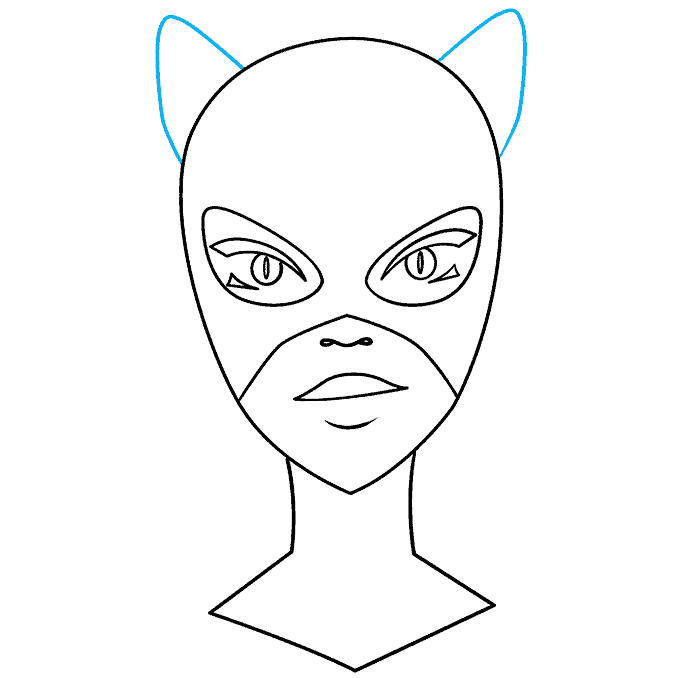 7. Draw Catwoman’s cat ears. Use a curved line to enclose the rounded triangular shape of each ear. 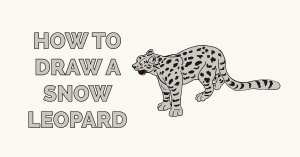 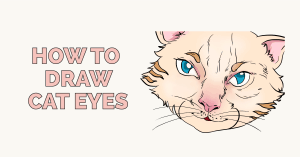 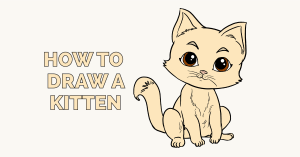 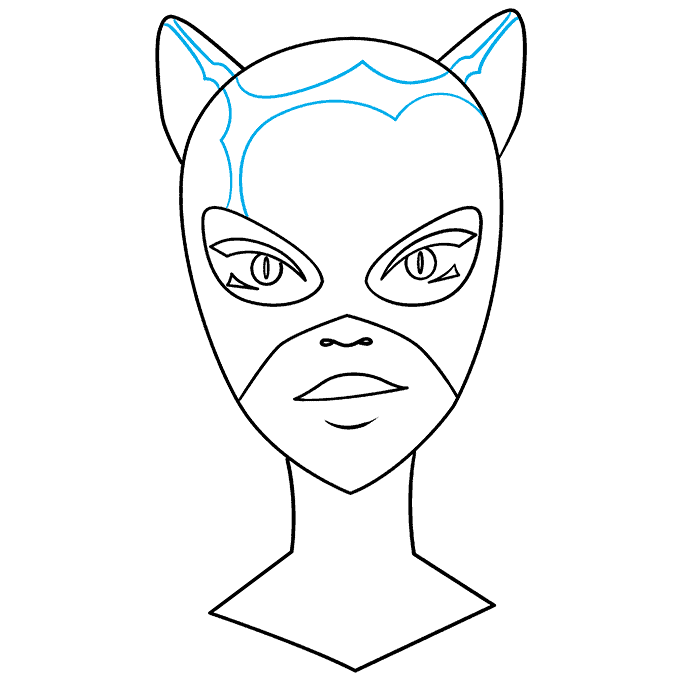 Complete the Outline of Your Catwoman Drawing - Step 9 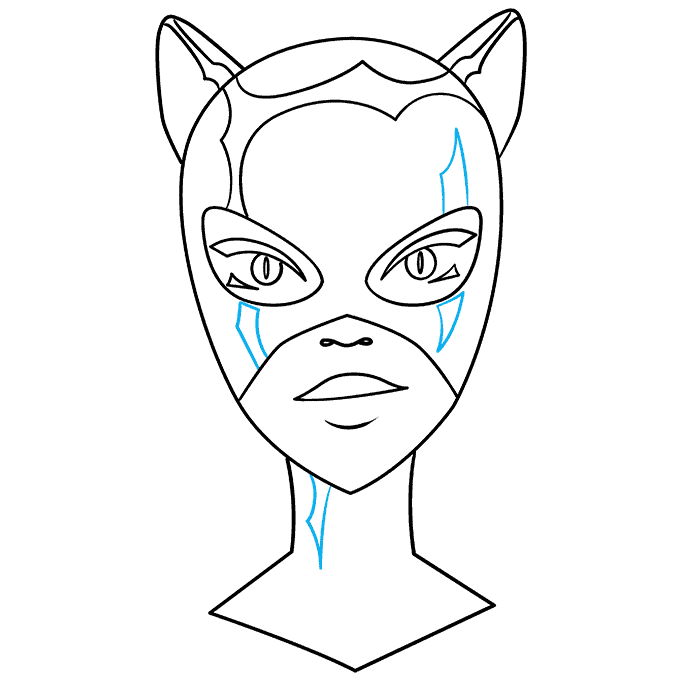 9. Draw series of lines to enclose pointed shapes above the remaining eye, below both eyes, and down one side of the neck.

Color your cartoon of Catwoman. She typically wears a shiny black suit.

Then, check out our other superhero cartoon tutorials. 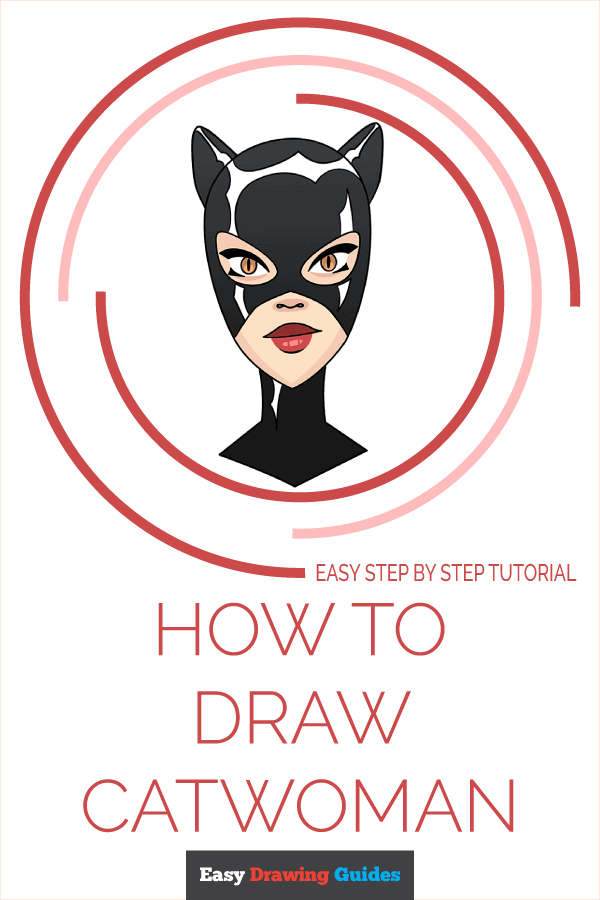 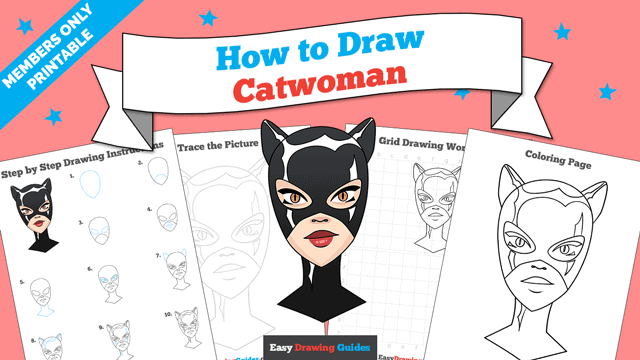