Peppa Pig is a British animated television cartoon aimed at children of the preschool age. The story centers around Peppa, her family, and her friends, each of whom is a different type of animal.

Peppa likes to do the things that ordinary children do. Along with her brother George and their friends, she goes to the playground, rides her bike, goes swimming, and visits her grandparents.

She eats dinner with her family and has conversations with them, often snorting in a piggy way as they talk.

Would you like to draw Peppa Pig? This easy, step-by-step cartoon character drawing tutorial is designed to show you how. All you will need is a pencil, a pen, or a marker, as well as a sheet of paper.

If you liked this tutorial, see also the following drawing guides: Baby Groot, Lilo and Stitch, and Olaf from Frozen.

1. Begin by drawing a curved line. This will form the top of Peppa Pig's head.

2. Draw a circle at the uppermost end of the curved line. This will form the tip of Peppa's snout or nose. Draw two small circles within the snout to indicate the nostrils.

3. Draw a short curved line from the bottom of the snot. Then, use a long, almost circular line to connect it to the end of the original line. This encloses Peppa's head.

5. Draw Peppa Pig's rosy blushing cheek. Enclose a circle within the face, opposite the snout.

6. Draw Peppa's eyes. Enclose two small circles between the ears and the snout. Then, draw a smaller shaded circle within each eye to indicate the pupils.

How to Draw a Mouse 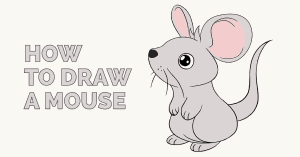 8. Draw Peppa's outstretched arms. For each arm, extend a pair of parallel lines diagonally from the body. Then, use three narrow "U" shaped lines to enclose the fingers and hand at the end of each arm. Then, draw Peppa's curly tail. Extend a pair of curved parallel lines that spiral around to enclose a circle. Then, extend the lines beyond the circle as if they overlap.

9. Draw Peppa's legs and feet. Extend two sets of straight, vertical, parallel lines from beneath the body. Then, use curved lines to enclose the irregular teardrop shaped feet or shoes.

Color Peppa Pig. She is typically pink in color with bright pink lips and a red dress.

You can find more of your favorite cartoon characters to draw in our Cartoon Characters Drawing Guides.

The Complete Peppa Pig Drawing Tutorial in One Image

How to draw: Peppa Pig - all drawing steps