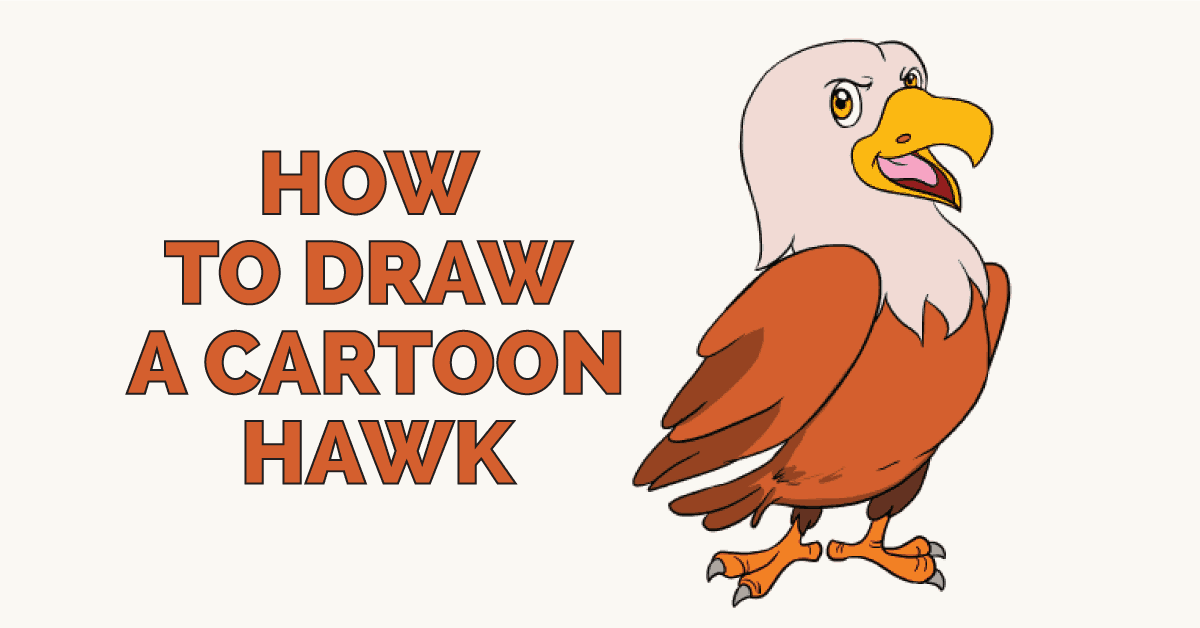 Hawks are hunters, birds of prey known as raptors. Hawks of various sizes are found all over the world.

Falconry, also called hawking, has been a popular sport for centuries. Falconry involves training a hawk to hunt prey on command. Since this was a sport of royalty, falcons were often seen in artwork.

Today, hawks appear in such art forms as sports team mascots and cartoon characters. Included among these are DC Comic's Hawkman and Hawkgirl, and Looney Tunes' Henery Hawk.

Would you like to draw a cartoon hawk? Doing so is easy with the help of this simple drawing guide. All you will need is a pencil, a sheet of paper, and perhaps a good art eraser. You may also wish to employ crayons, colored pencils, paints or markers to shade your finished drawing.

If you liked this tutorial, see also the following drawing guides: Peacock, Hummingbird, and Penguin.

Step-by-Step Instructions for Drawing a Hawk

1. Begin by outlining the hawk's head. Do this using one long and one short overlapping, curved line. The overlap will form the bird's brow.

2. Draw the bird's beak. You will use a series of curved lines. Allow the lines to come to a point at each tip of the beak. Enclose the inner portion of the beak using another curved line.

3. Outline the feathers at the base of the bird's neck. Do this using a series of short, curved lines that meet in jagged points.

4. Outline the bird's wing. Use a long curved line for one side of the wing; for the opposite side, draw a series of shorter, overlapping curved lines to indicate the flight feathers.

5. Next, you will outline the hawk's stomach, tail, and far wing. Use a long, curved line for the chest, and another for the belly. Use several curved lines that double back on themselves to form the tail feathers. use another curved line to enclose the far wing.

6. Erase guide lines from the near wing.

7. Enclose the legs. For each leg, use a series of short curved lines, indicating the feathers at the bottom of the leg. Then, draw the feet. Use a long, curved line to draw each toe, allowing the line to double back on itself. Enclose three toes on each foot - two facing forwards and two facing backwards.

8. Draw a talon, or claw, on the end of each toe. For each talon, use two curved lines to enclose an irregular, slanted triangle. Detail the toes by banding them with short, curved lines.

9. Complete your hawk by drawing the eyes and tongue. For each eye, you will draw three circular shapes - a very small circle within a small oval within a larger oval. This forms the eye itself, the pupil, and the gleam in the hawk's eye. Draw a curved, loosely "S" shaped line, above the eye. End the line with another short, curved line. Draw a small oval on the beak to indicate the nostril. Draw a curved line through the open mouth to distinguish the inside of the mouth. Then, use a curved line to enclose the irregular shape of the tongue. Finally, draw a short, curved line to detail the center of the tongue.

10. Color your cartoon hawk. Most hawks, eagles, and other raptors come in shades of brown, cream, red, and orange. Don't forget to check out our other fun avian drawing guides, including the peacock, a hummingbird, and a penguin.

The Complete Cartoon Hawk Drawing Tutorial in One Image

How to draw: Cartoon Hawk - all drawing steps