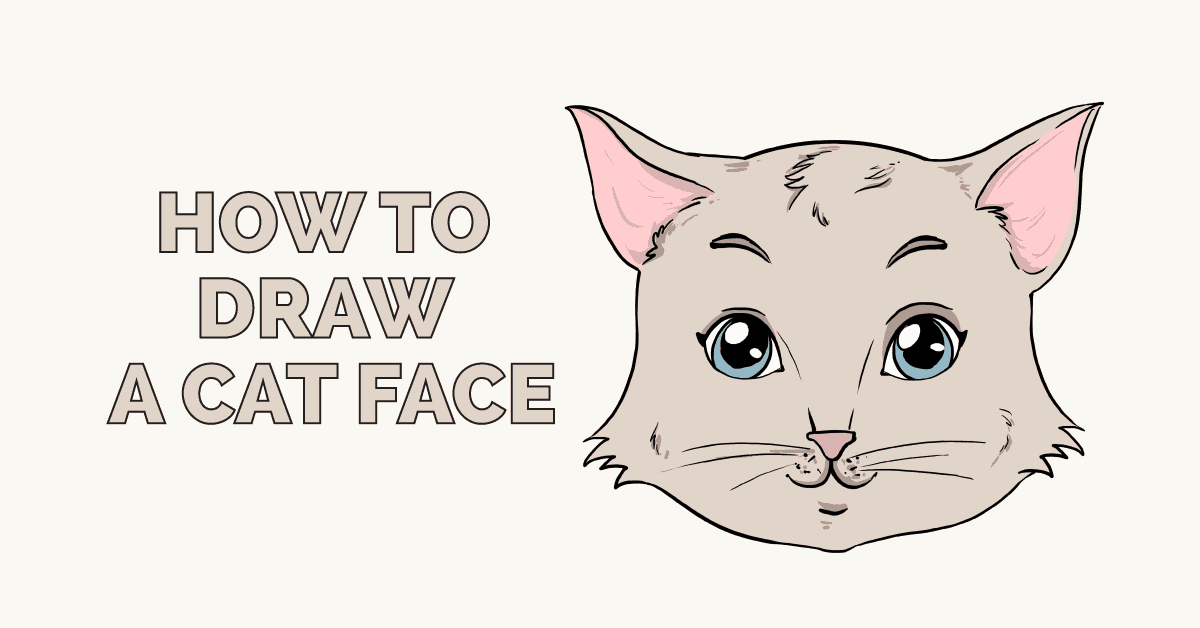 Cats and humans have enjoyed a long history together. Archaeological evidence from China, Egypt, and the Middle East indicate that cats were hunting mice near agricultural storehouses - and eating table scraps - thousands of years ago. The first solid evidence of domestication - breeding cats for the specific purpose of catching mice and living alongside people - dates to 1,500 B.C.E.

Would you like to draw a cute cat face? This easy, step-by-step drawing tutorial is here to help. All you will need is a pencil, a sheet of paper, and an eraser. You may also wish to use crayons, markers, colored pencils, or paints to shade your finished kitty.

Cats were regarded as religious icons in some ancient societies, especially in Egypt. As such, they were often depicted in art. Later, cats, especially black cats, were associated with witches and thought to possess magical powers.

Today, cats often enter the art preferences of pet lovers. They are also featured in animated films and related artwork. For example, cats are a common addition to anime cartoons.

If you liked this tutorial, see also the following drawing guides: Simple Cat, Pusheen the Cat, and Cartoon Cat.

​Step by Step Instructions for ​a ​C​at Face

2. From each side of the oval, extend a long, curved line. At the bottom of the line, connect short, curved lines in a jagged zigzag pattern. This forms the cat's cheeks, complete with tufts of fur.

3. Connect the tufts using a long, curved line, to completely enclosing the face. Notice the pointed bulge in the line indicating the chin.

4. On each side of the head, draw three curved lines extending outwards and meeting in a point - forming a curved triangle. This is the cat's ear. Repeat on the opposite side.

5. Erase the guide line of the original oval.

6. Add detail to the ears. Draw a curved line within the ear, parallel to its exterior. At the base of the ear, use very short lines outline the head, giving it a furry texture.

7. Draw the cat's eyes. For each eye, use two curved lines to enclose a rounded shape with points on each end. Shade the exterior points. Within the eye, draw a circle within a circle. In the smaller circle, draw two ovals of different sizes, giving life to the eye. Shade the smaller circle, indicating the pupil. Add depth by placing a curved line above each eye. For the eyebrows, form a curved shape using two curved lines - meeting in a point on one end and a blunt, rounded intersection on the other.

8. Draw the nose and mouth. Begin by extending faint lines downward from the eyes. This outlines the snout. Connect these lines by enclosing a small, irregular shape, somewhat like a rounded, upside down triangle. Beneath the nose, draw two curved lines in the shape of a wide "W" to form the mouth. Above the "W," draw dots to indicate the growth of whiskers. Add depth to the chin by drawing a small curved line beneath the "W."

9. Extend long whiskers - long curved lines - from the dots on each side of the mouth. Add the texture of fur to the forehead and cheeks using short, curved lines that meet at jagged angles.

If you like to make more cat drawings, check also the Simple Cat and Cartoon Cat drawing tutorials.

The Complete Cat Face Drawing Tutorial in One Image

How to draw: Cat Face - all drawing steps