Humorous cartoons and drawings first rose to fame during the 1840s, and animation abounded from the early 1900s onward. As with literature, the jester archetype found its place in comics, animated films, and cartoon series.

A goofy, clumsy, or incompetent character like this one in this guide is often provided for comic relief. He or she may be a main character or play a supporting role.

He may be a constant feature - for example, appearing in each episode of a series - or appear occasionally or just once.

The hyena Ed in The Lion King is a nonhuman example of this type of character. Mad scientists or a villain's minions may also fill this role.

All you will need is a pencil, an eraser, and a sheet of paper. You may also wish to color your finished character.

If you liked this tutorial, see also the following drawing guides: Cartoon Scientist, Bob the Minion, and Sans from Undertale. 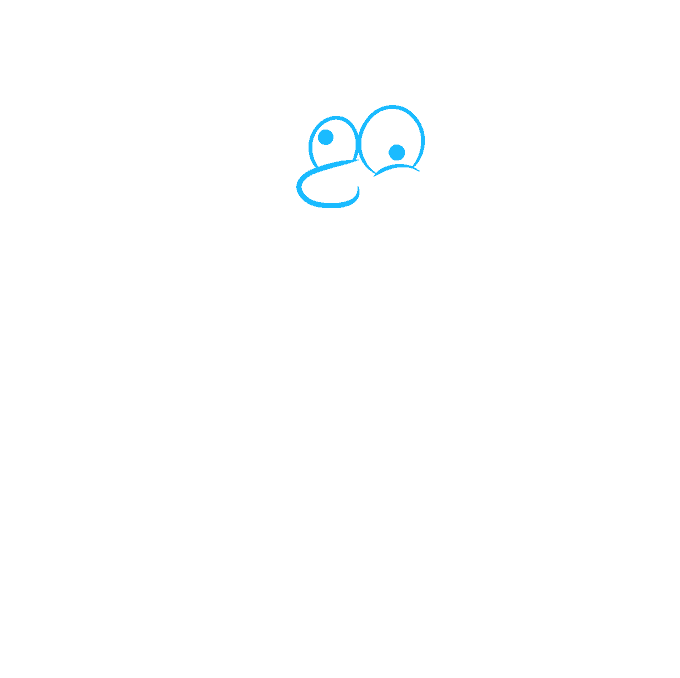 2. Draw the mouth. Use curved lines to outline the upper lip, lower lip, buck teeth, tongue, and the dimple at the corner of the mouth. Draw a short line to separate the teeth, and another below the mouth to contour the chin.

4. Use a series of connected curved lines to outline the messy hair. Allow the sideburns to come down beside the ears, fully enclosing the outline of the face.

7. Draw the remaining arm and hand. Use pairs of curved lines for the upper arm, lower arm, and sides of the hand. Then, use overlapping "U" shaped lines to outline the fingers.

8. Draw the legs. Use pairs of curved lines to outline the upper and lower legs, bent at the knee. Draw a curved line across the bottom of the raised leg. Extend two short lines, connected at the bottom, to indicate the visible portion of the ankle.

9. Use straight and curved lines to draw the semicircular shapes of the shoes. Draw a line parallel to the bottom of the shoe to outline the sole. Then, draw curved shapes across the top of the shoe to indicate the shoelaces.

The Complete Crazy Character Drawing Tutorial in One Image

How to draw: Crazy Character - all drawing steps