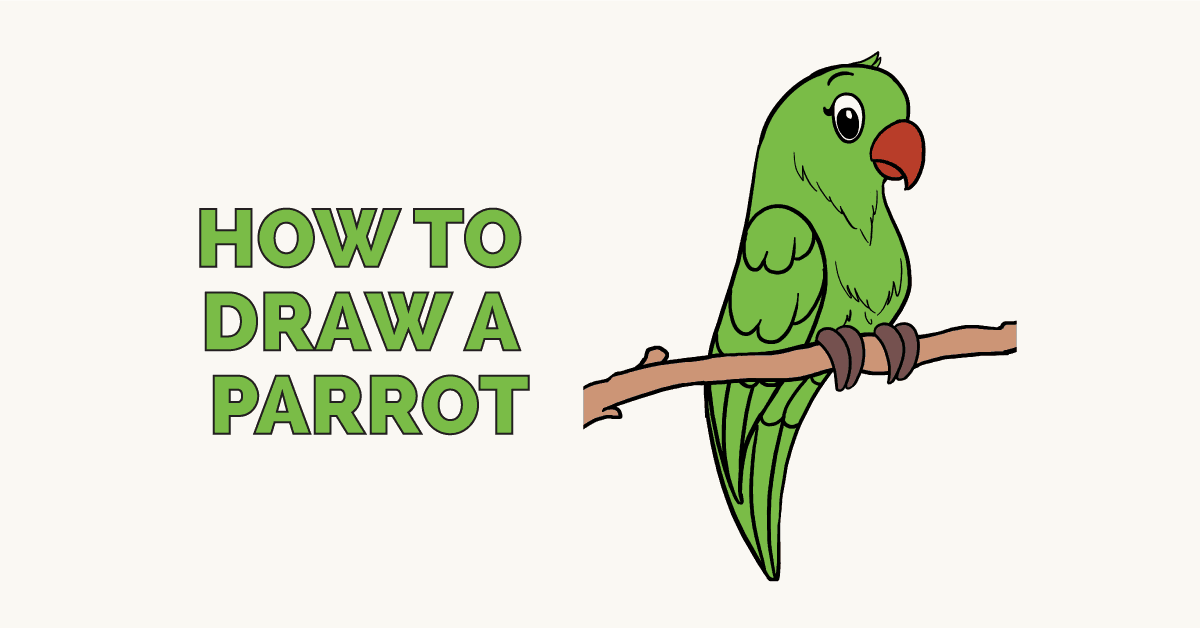 Parrots are brightly colored, often noisy birds that live in tropical regions of South America, Africa, Asia, and Australia. About 360 different kinds of parrots have been described.

Parrots have long been important to people. They have been kept as pets since ancient times. For example, the Romans keeps parrots both as pets and as livestock.

One reason for the bird's popularity is its ability to imitate human sounds, seemingly learning to "talk." Parrots are also affectionate, capable of learning tricks, and long lived - some living 70 years or more.

Today, parrots are often used as symbols of classic pirates and of the earth's tropical regions. Parrots have also starred in their own feature films as well, such as the 2011 film Rio.

Would you like to draw a playful parrot? Doing so is easy with the help of this simple, step-by-step drawing tutorial.

​Step by Step Instructions for Drawing​​​ a​​ ​Parrot

3.​ Erase the guide lines separating the parrot's head and body.

4. ​​​​​​​​Using a curved line, enclose a rounded shape on the front of the parrot's head. This will complete the shape of the head. Then, use two curved lines to enclose a large, upside down teardrop shape along the back of the bird's body. This outlines the wing.

5.​​ ​​At the front of the head, use three short, curved lines to enclose a curved triangle overlapping the face. This is the parrot's beak. Enclose a half circle beneath the beak, using a short, curved line. This forms the beak's lower jaw.

6.​ ​​​​​​​​​​​​Draw several rows of wavy lines across the bird's wing, using connected, "U" shaped lines to form each layer. Do the same at the top of the tail. At the tip of the wing and tail, draw vertical curved lines, indicating flight feathers (learn how to draw a feather).

8.​​​ ​Draw a set of bumpy, wavy, parallel lines across the front of the bird, passing near the base of the tail. This forms the tree branch on which the bird is perched. Then, draw a few small protrusions from the branch. Erase guide lines as necessary.

9.​​ ​Add detail to your parrot. Enclose a few small triangles on top of the head to indicate a tuft of feathers. Draw an oval within an oval to form the eye. Draw a small circle within the smaller oval, and shade around it. Draw a thick, curved line at the corner of the eye to indicate eyelashes, and a curved line above to form the eyebrow. Use sets of curved lines, connected on each end at gentle points, to form the feet. Erase guide lines as necessary. Add feathery detail to the bird's chest using "V" shaped areas of short, curved lines

10. ​​​​​ ​Color your parrot. The bird in our example is green, but parrots come in many other colors as well - red, blue, yellow, grey, or combinations of colors.

The Complete Parrot Drawing Tutorial in One Image

How to draw: Parrot - all drawing steps