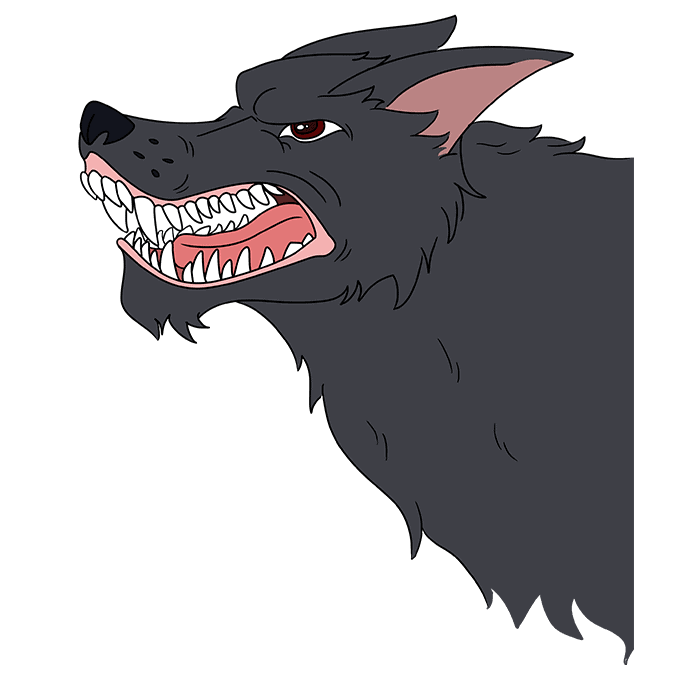 The wolf is an animal that has captured the imaginations of humans for millennia. Wolves are native to Europe, Asia, and the Americas. They are the ancestors of "man's best friend," the domestic dog, but they have been both respected and reproached.

It is not surprising that the ancient Romans linked a growling wolf to their god of war. In Norse mythology, Loki fathered a giant wolf and Odin kept two of the animals as pets. In ancient China, the wolf was associated with cruelty or "wolf heartedness."

Fables also include angry wolves, such as Little Red Riding Hood and The Boy Who Cried Wolf. In The Jungle Book, angry wolves protected Mowgli.

Despite its reputation, the wolf is actually a shy creature who typically avoids humans. Humans are not the natural prey of wolves, and attacks on humans are rare.

The growling wolf is a popular motif on the back of jackets, on vehicles, and in cartoons, especially anime. The image is one that conveys power, anger, and danger. In anime and manga, it may represent the extreme feelings of the character.

Would you like to draw a cartoon of a snarling wolf? This easy, step-by-step cartoon animal drawing tutorial is here to show you how. German shepherds and several other dog breeds closely resemble their ancestor the wolf. You may also use this tutorial to sketch a growling dog.

If you liked this tutorial, see also the following drawing guides: Baby Wolf, Werewolf, and Wolf. 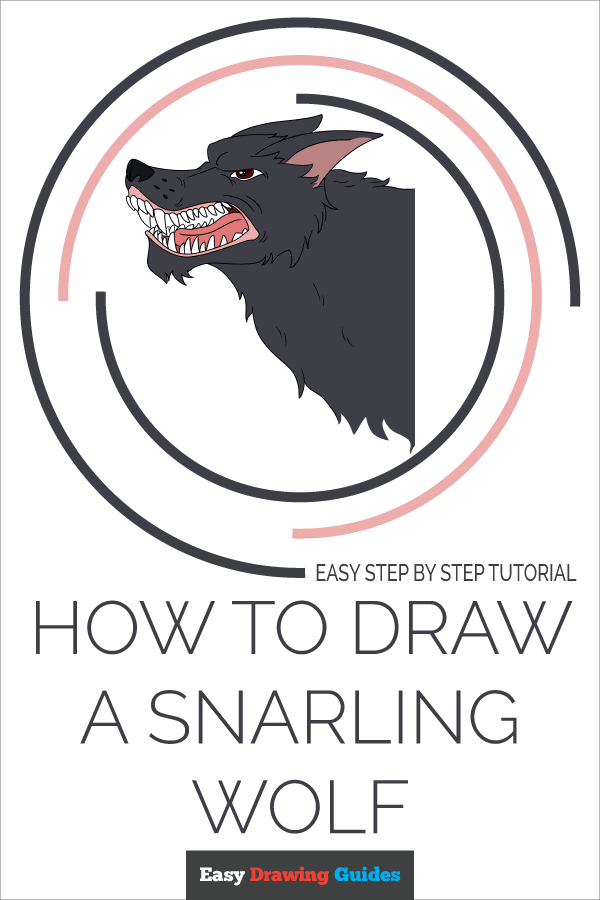 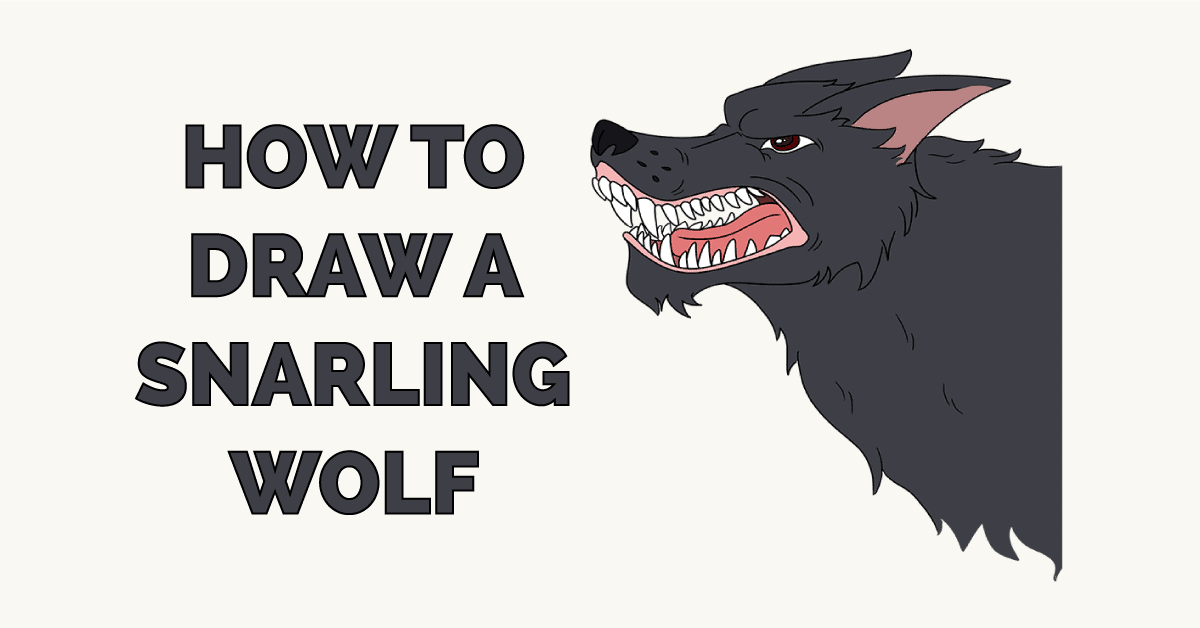 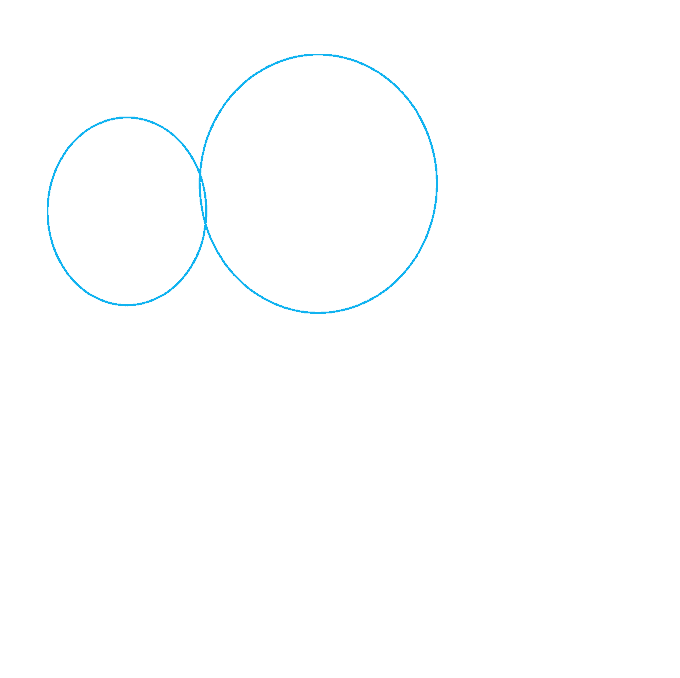 1. Draw two circles side by side, one smaller than the other. These guide lines will help you to sketch the snarling wolf's head and jaw. 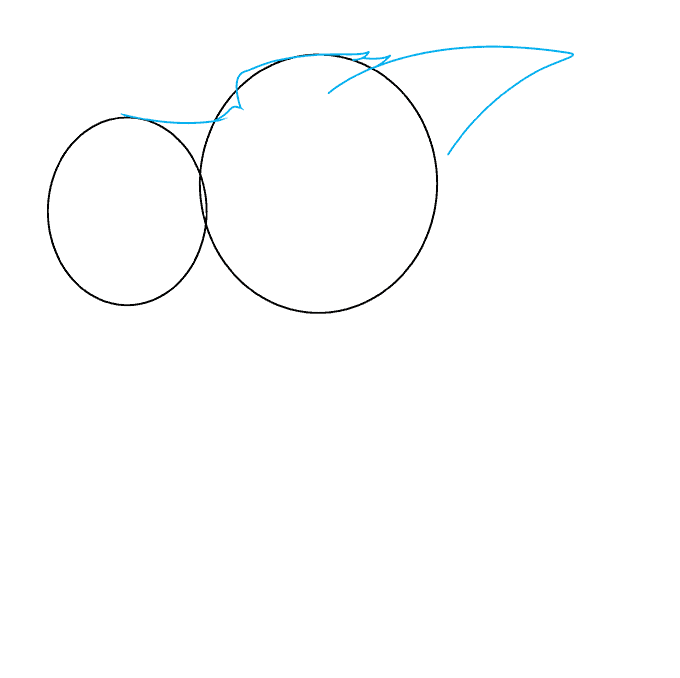 2. Draw a curved line between the tops of the circles. Allow it to continue on a jagged course through the larger circle, outlining the brow and tufts of fur on top of the head. Then, use two curved lines to outline a curved triangular shape to form the ear. 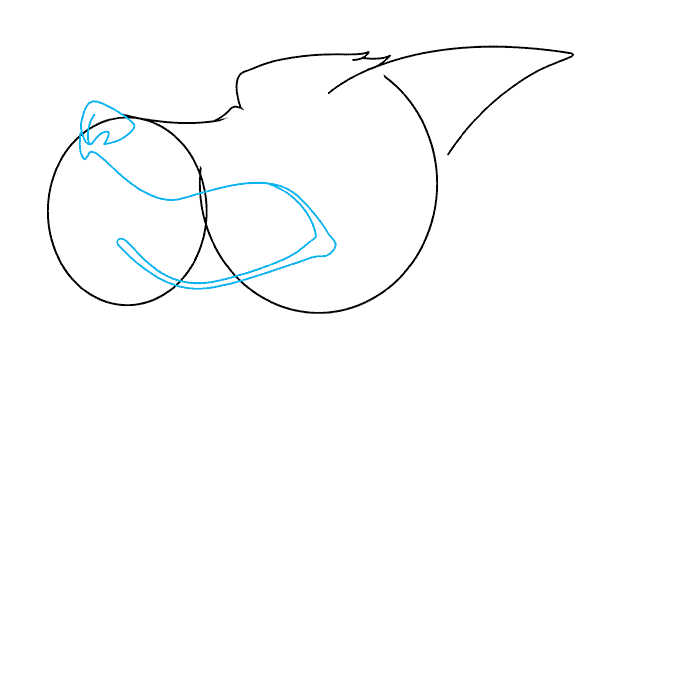 3. Use curved lines to enclose the nose where the curved line meets the small circle. Extend a curved line below it, and double it back to outline the open mouth. Draw a second line parallel to it, enclosing a wishbone shape. 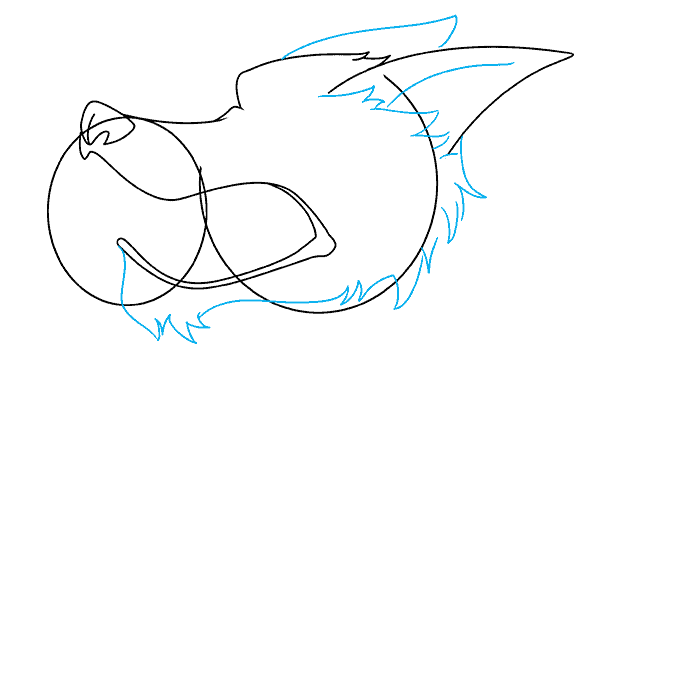 4. Use two curved lines to outline the triangular shape of the second ear. Detail the first ear with a curved line running down its length. Then, use pairs of short lines, all of various sizes, to draw jagged tufts of fur at the base of the ear and along the jaw, fully enclosing the shape of the head. 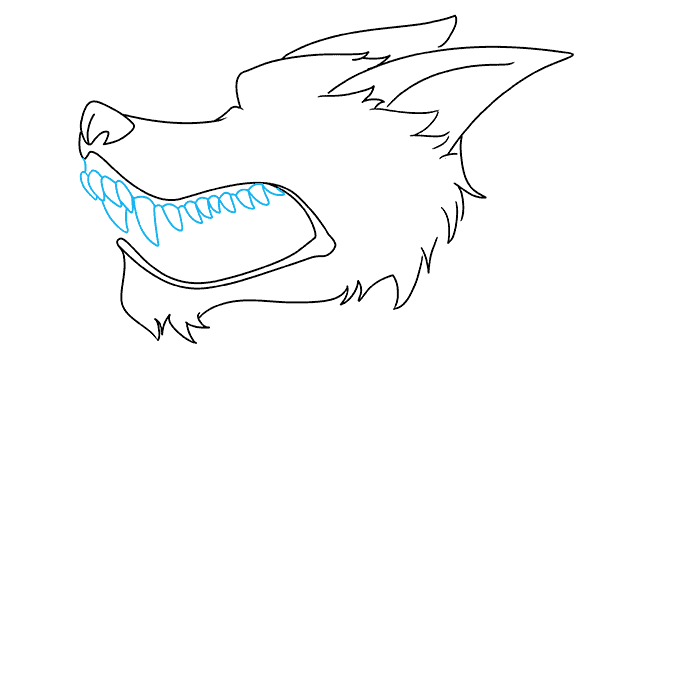 5. Erase the original guide line circles. Then, begin filling in the bared teeth. Each tooth should be a rounded triangle, but note that the canine teeth are much larger than the others. Note, too, that the teeth outline an exposed portion of gums at the front of the mouth. 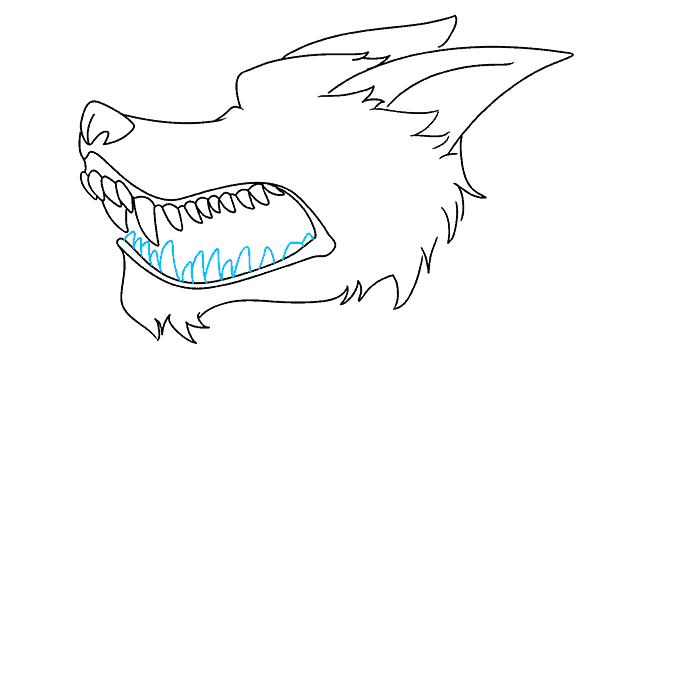 6. Outline the teeth of the lower jaw, each a curved triangle with a rounded point. 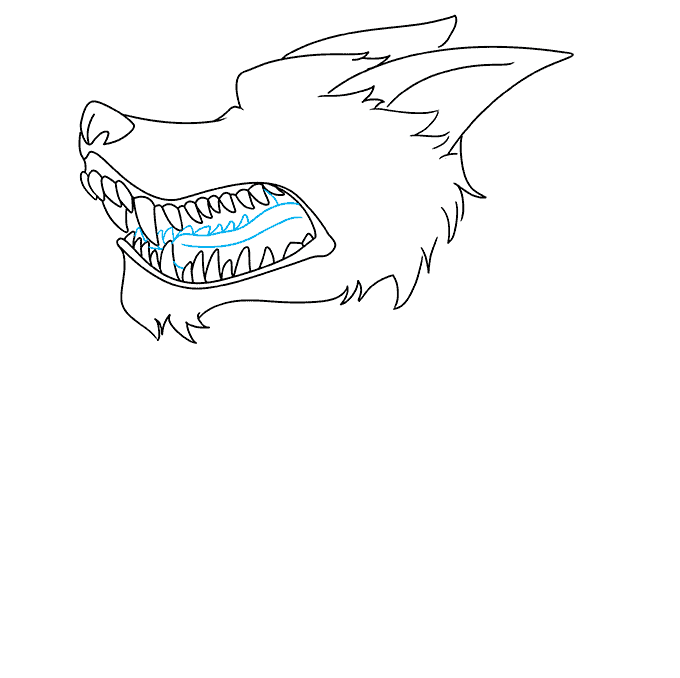 7. Use curved lines to outline and detail the tongue. Then, draw triangular teeth on the opposite side of it. 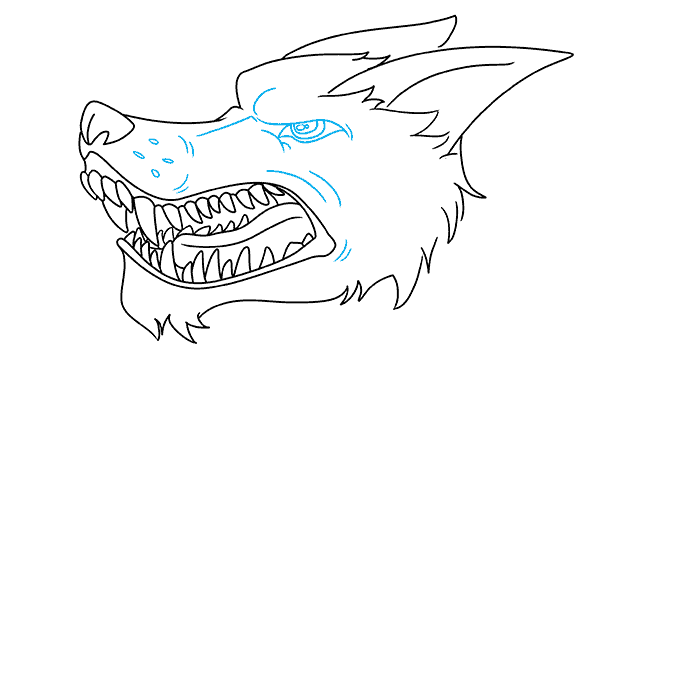 8. Draw the angry wolf's eye. Outline the double-pointed shape with curved lines, then enclose successively smaller partial circles. Contour the brow, around the mouth, and the tip of the muzzle with curved lines. Shade small ovals on the muzzle to indicate the whiskers.

9. Use long and short curved lines to sketch the jagged tufts of fur along the wolf's back and neck.

Color your angry wolf. Wolves are typically brown or grey in color but can range from solid white to solid black. 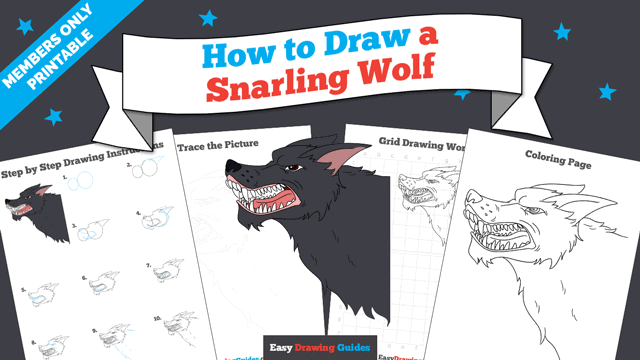