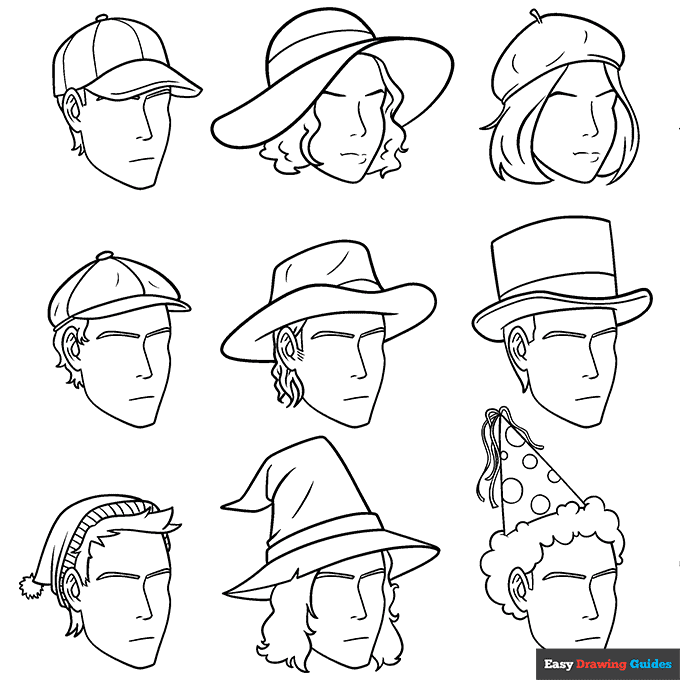 There is an old saying that "the hat makes the man." In other words, a hat is a fashion statement that may say something about a person or the way they want to be perceived.

That is true of anime and manga characters, too. You can use this easy, step-by-step guide to learn how to draw anime hats.

How to Draw Anime Hats

Take a look at the anime hats reference illustration below. What do you notice? Well, for starters, there are many different styles of hats! Some are associated with women, others with men, and some could easily be worn by anybody.

Let's look at each of these hats in more detail. What does each one tell you about the wearer?

Baseball cap: Baseball caps are close-fitting round hats with a stiff bill to keep the sun out of the wearer's face. These hats were first worn by American baseball teams in the 1800s.

Today, they are still associated with sports. Many have a team logo on the front. This can identify a team your character likes or plays on.

Floppy sun hat: This type of hat is usually worn by female characters. It has a tall crown, a hatband, and a large brim for keeping the sun off the face.

This type of hat lends itself well to a day at the beach. Paired with a dress (see How to Draw Dresses), it can also show that the character is from a previous decade (or century) or that they hail from the upper class or royalty.

Beret: Pronounced "bur-ay," this type of hat is usually worn by female characters. It is associated with Paris, France, and with artistic personalities.

Newsboy cap: This type of flat cap originated as the Scottish "tam o'shanter," a hat worn by the wealthy for outdoor leisure activities such as golf. During the early 1900s, it became popular among the American and European working class. Its use by young boys selling newspapers on street corners earned its current name.

Cowboy hat: Cowboy hats are worn by both men and women. They have a tall crown, a hatband, and a wide brim. They are associated with farms, the American West, and American country music. Sometimes, they are also used to bring a "Wild West" feel to science fiction cartoons.

Top hat: Top hats are tall, round, stiff hats with a medium brim. They were worn by men of wealth or distinction during the Regency and Victorian eras, especially in Europe and North America. Sometimes, they are still paired with tuxedo suits for special occasions.

Slouchy beanie: Slouchy beanies can be worn by males or females. They are often associated with cold weather and winter sports, but many characters wear them during all seasons.

Witch's hat/pointed hat: Today, we often associate black pointed hats like this one with archetypal witches. But the pointed hat has a richer history. Similar hats dating back centuries were worn by men and women in Asia, the Middle East, and Europe.

Party hat: These cone-shaped paper hats are often worn at birthday parties or New Year's Eve celebrations. Interestingly, the design is based on the "dunce cap" that naughty children once wore as a form of punishment. Their use in festivities indicates a relaxing or even reversal of social norms at these events. 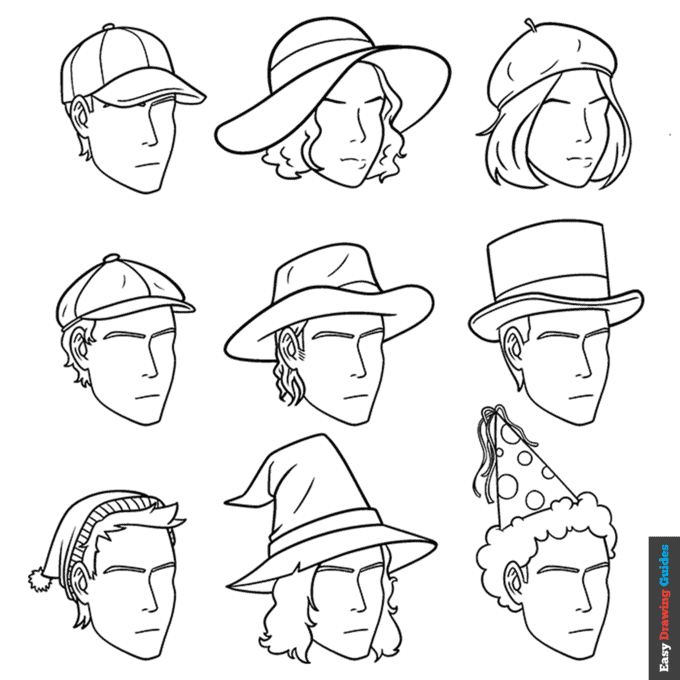 Of course, there are many other types of hats. You can learn to draw each of the following step-by-step.

Pirate hats like this one are associated with seafaring marauders of the Caribbean. They also appear in the seas of some anime! See the pirate hat drawing. 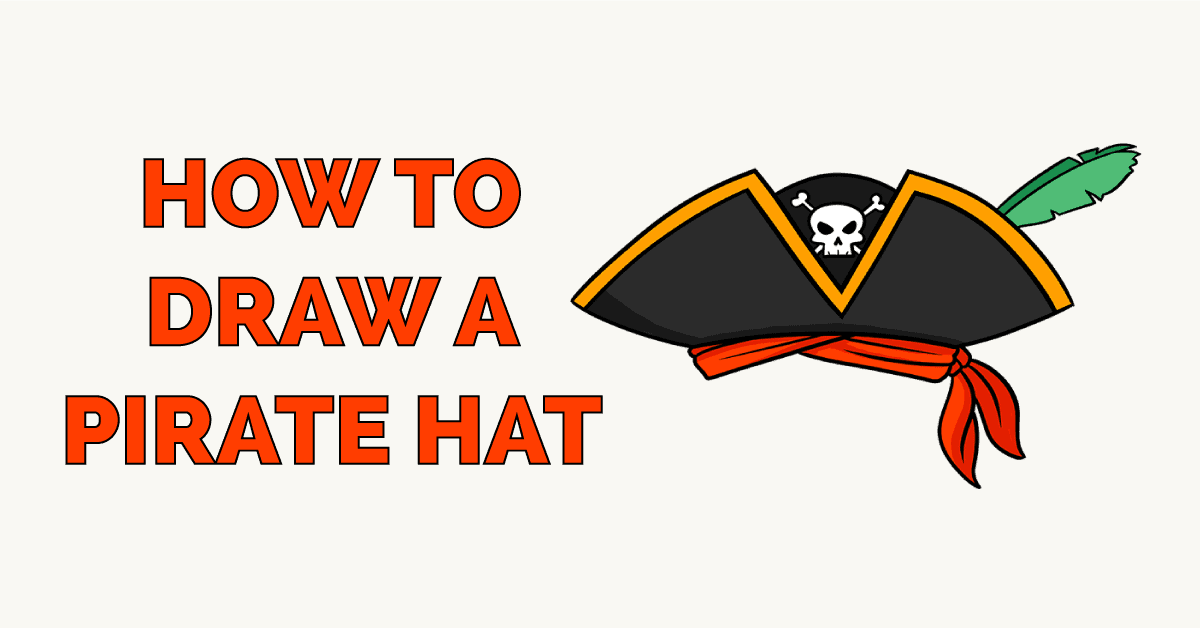 Whether your characters are celebrating Christmas (see Christmas anime girl) or you are drawing the big guy himself, this hat will immediately identify the time of year. See the Santa hat drawing. 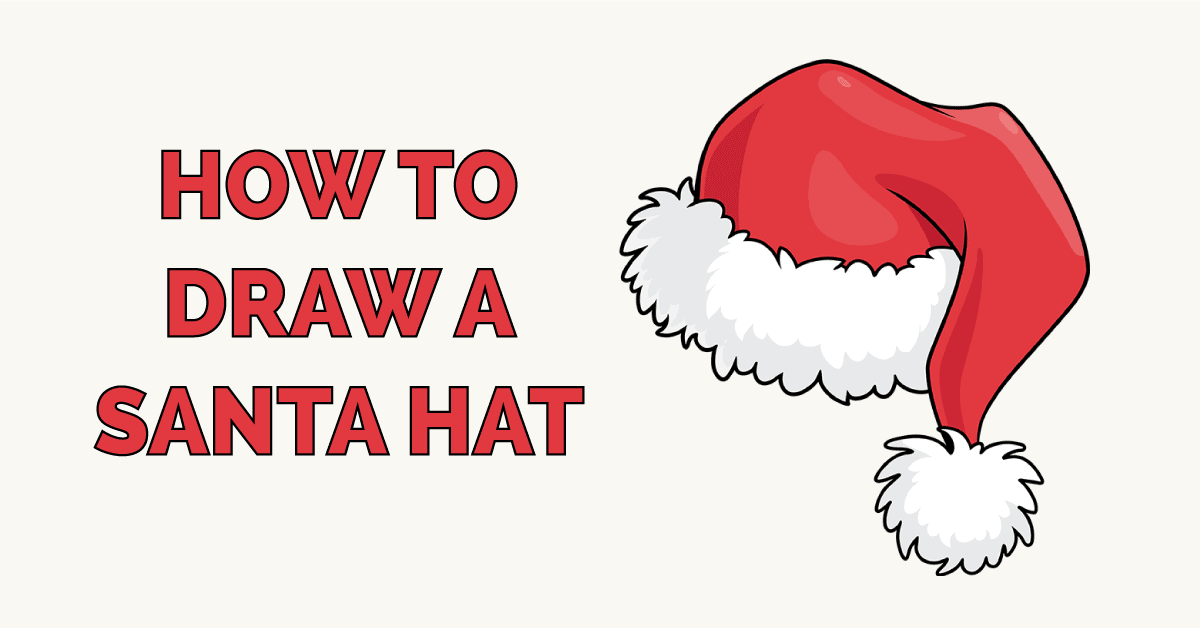 Pointed hats have long been associated with witches and wizards (see Anime Wizard). Decorate yours with stars and a blue background to capture the pop-culture wizarding style. See the witch hat drawing. 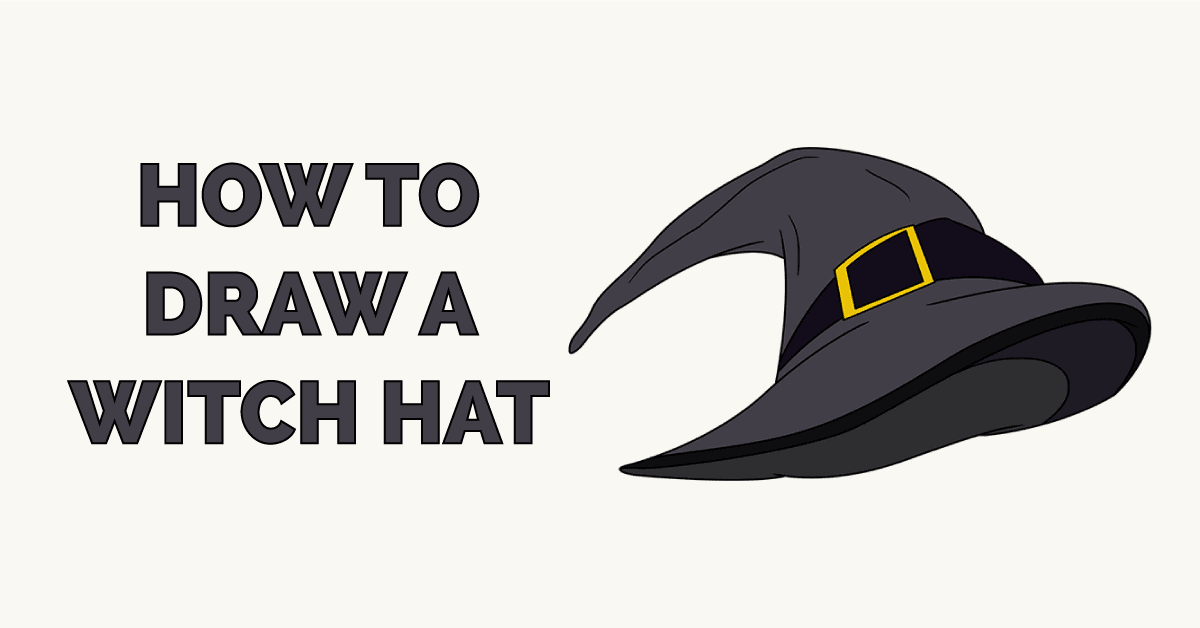 This top hat is in the form of a fedora. Many "cool" characters were this modern classic. See the top hat drawing. 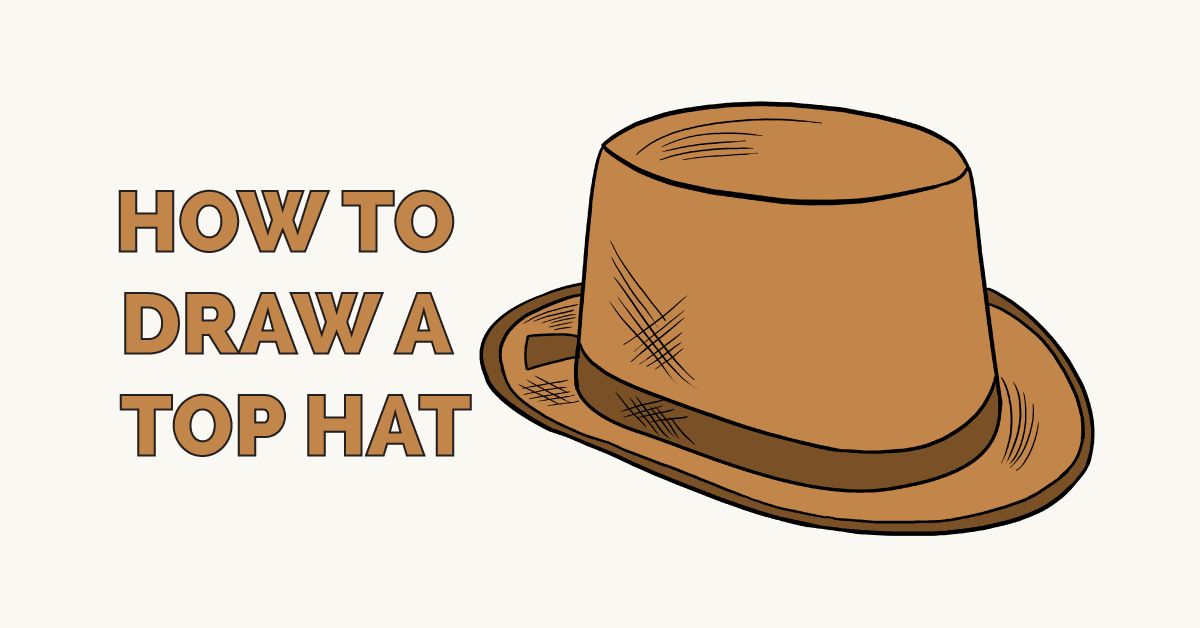 A chef hat identifies the cook and keeps his or her hair out of your food. See the chef hat drawing. 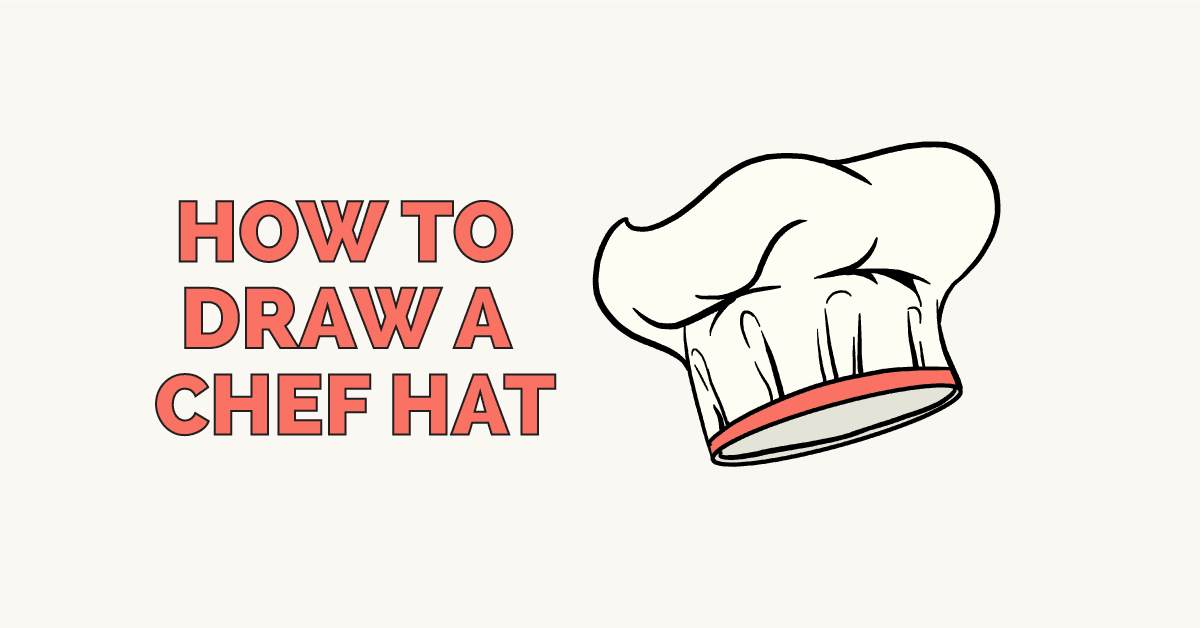 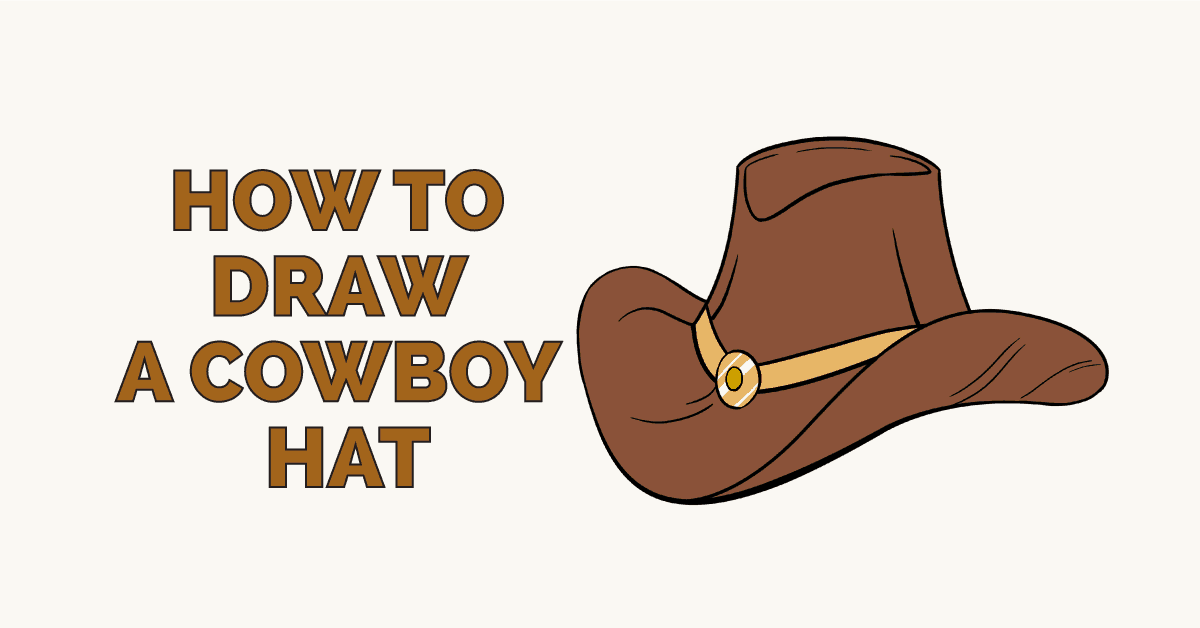 What to draw next?

Add a hat to one of the characters you've drawn in a previous lesson. For example, you could:

Or, follow one of the 100+ anime drawing tutorials we have on Easy Drawing Guides. 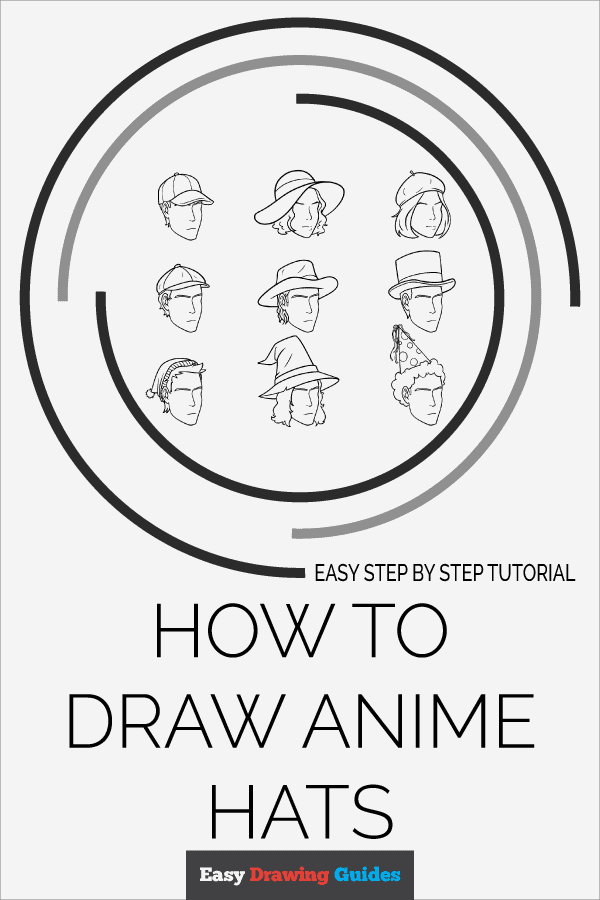