"You have no idea what we're capable of. The gnomes are a powerful race!"
- Jeff, Gravity Falls

Gravity Falls is an animated series from Disney Channel. It stars twin siblings Mabel and Dipper Pines, "who are in for an unexpected adventure when they spend the summer with their great uncle in the mysterious town of Gravity Falls, Oregon."

Gnomes dwell in trees in Gravity Falls Forest. They have a special ability to compile themselves into a single giant gnome. Their weaknesses? High-pitched whistles and leaf blowers.

The gnomes of Gravity Falls have been in search of a queen since their previous one was eaten by a badger. They often eat or destroy human objects, sometimes attempting to kidnap human characters to be their queen. Gnome characters include Jeff, Carson, Jason, Steve, and Shmebulock.

Gnome legends date back centuries. In European folklore, they are 'subterranean goblins or earth spirits who guard mines of precious treasures.' They resembled old men and were said to move through the ground as a fish moves through the water. Gnomes could use magic to affect humans.

The gnomes of Gravity Falls resemble garden gnomes, and a few actual garden gnomes are even seen in the series. Garden gnomes became popular lawn ornaments after World War II, and during the 1960s and 1970s, they became "Disneyfied" to resemble the characters of Snow White and the Seven Dwarfs.

Would you like to draw a cartoon of a gnome from Gravity Falls? This simple, step-by-step cartoon character drawing tutorial is here to show you how. All you will need is A pen, pencil, or marker and a sheet of paper. You may also wish to color your finished drawing.

If you liked this tutorial, see also the following drawing guides: Steven Universe, Nicole Watterson from the Amazing World of Gumball, and Spongebob.

1. Begin by drawing the gnome’s eyes. Draw two circles, nearly overlapping each other. Shade a small circle in the center of each.

2. Use a curved line to outline the nose. Then, use a series of curved lines to enclose the butterfly-like shape of the mustache.

3. Use curved lines to outline the face.

How to Draw Piglet

How to Draw Squidward from Spongebob Squarepants

5. Use a series of connected curved lines to sketch the gnome’s beard.

6. Draw the ear using a “C” shaped line. Contour the inside of the ear with a curved line, and use another to connect it to the corner of the hat. 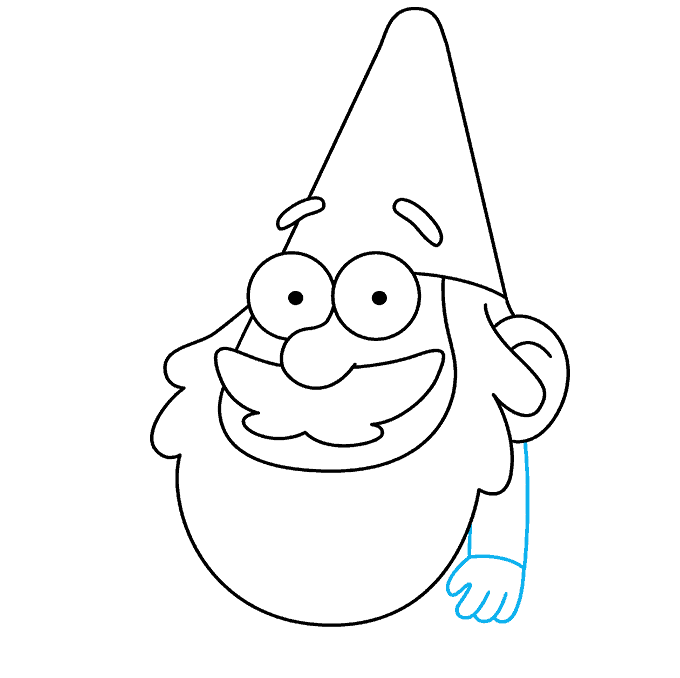 7. Extend a pair of curved lines to form the arm, and connect them with a short curved line. Then, use a series of overlapping “U” shaped lines to enclose the hand and fingers.

8. Extend two short straight lines to outline the remaining line. Connect them with a curved line. Then, use a series of curved lines and overlapping “U” shaped lines to draw the hand. Notice the curved lines that contour the flesh of the palm, at the base of the fingers and thumb.

Color your gnome. Then, check out our other cartoon character drawing guides.

Color your gnome. Then, check out our other cartoon character drawing guides.

The Complete Gnome from Gravity Falls Drawing Tutorial in One Image

How to draw: Gnome from Gravity Falls - all drawing steps