Learn how to draw a great looking Kraken with easy, step-by-step drawing instructions, and video tutorial. You can now easily create a beautiful Kraken drawing. 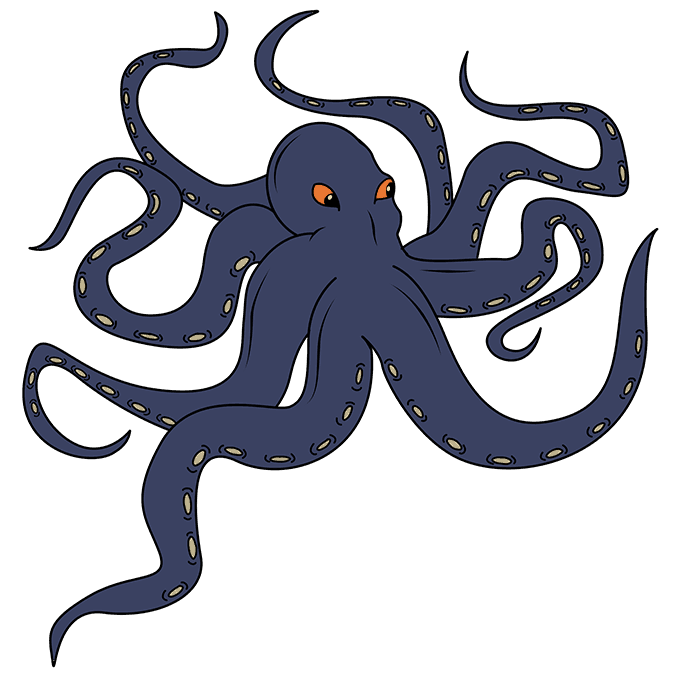 "Below the thunders of the upper deep,
For, far beneath in the abysmal sea,
His ancient, dreamless, uninvaded sleep
The Kraken sleepeth."
- "The Kraken" by Alfred Tennyson

The Kraken is a sea monster of ancient legend, part of the mythology of Europe's Scandinavian region. The Kraken was purported to be large enough to sink a ship at sea.

The Kraken was first described in an educational book around the year 1250, in which it was compared to a whale that could not reproduce and which lured schools of fish into its huge mouth. By the late thirteenth century, the Kraken also played a role in many sagas of Iceland, Greenland, and surrounding areas. One said of the Kraken, "it is the nature of this creature to swallow men and ships, and even whales and everything else within reach."

The myths likely arose from sightings of giant or colossal squid, which can reach lengths 13 to 15 meters (40 to 50 feet).

The squid and the octopus are often confused for one another. Octopi generally have a round head and eight arms. Squid have triangular heads with fins on each side, eight arms, and two tentacles. Can you tell which type of mollusk is depicted in our illustrations?

Would you like to draw a cartoon Kraken? This easy, step-by-step cartoon drawing tutorial is here to show you how. All you will need is a pencil, an eraser, and a sheet of paper.

If you liked this tutorial, see also the following drawing guides: Squid, Whale, and Cartoon Shark. 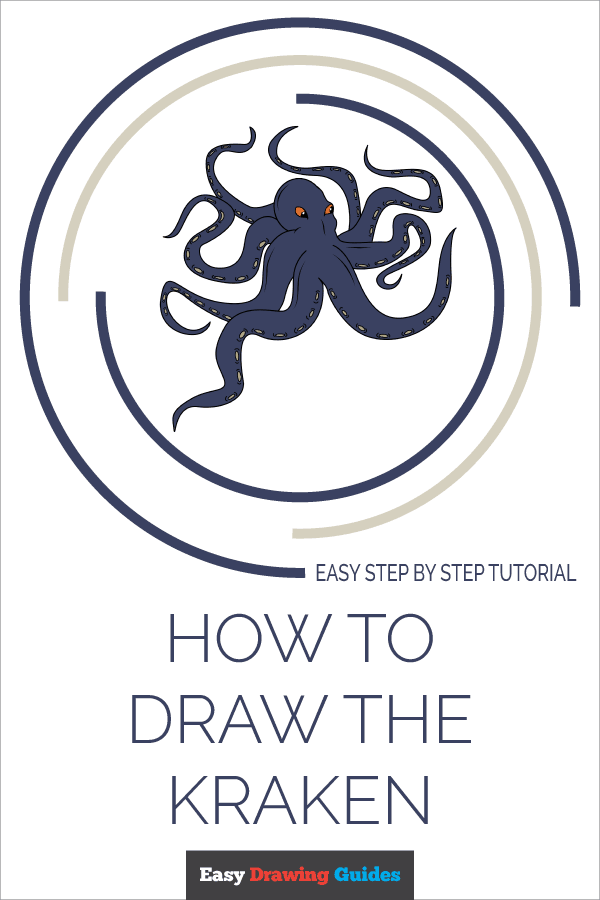 Step-by-Step Instructions for Drawing the Kraken 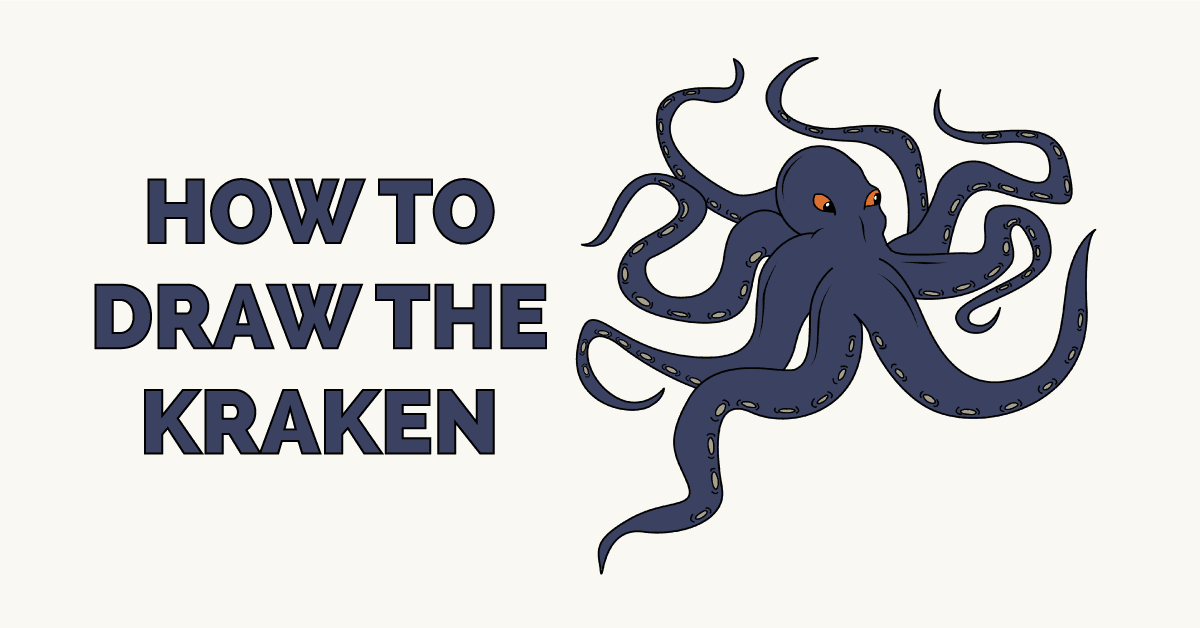 How to Draw a Great Looking Kraken for Kids, Beginners, and Adults - Step 1 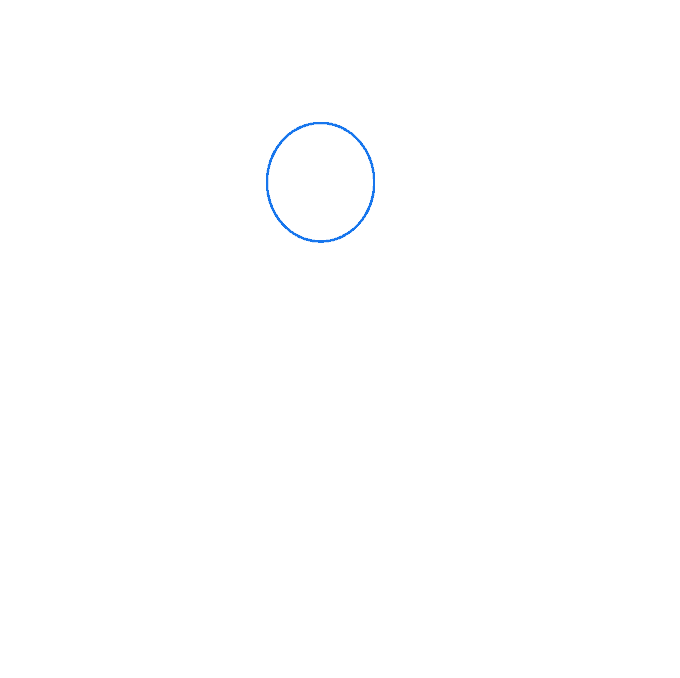 1. Begin by drawing a circle. This will help you to form the octopus’s head. 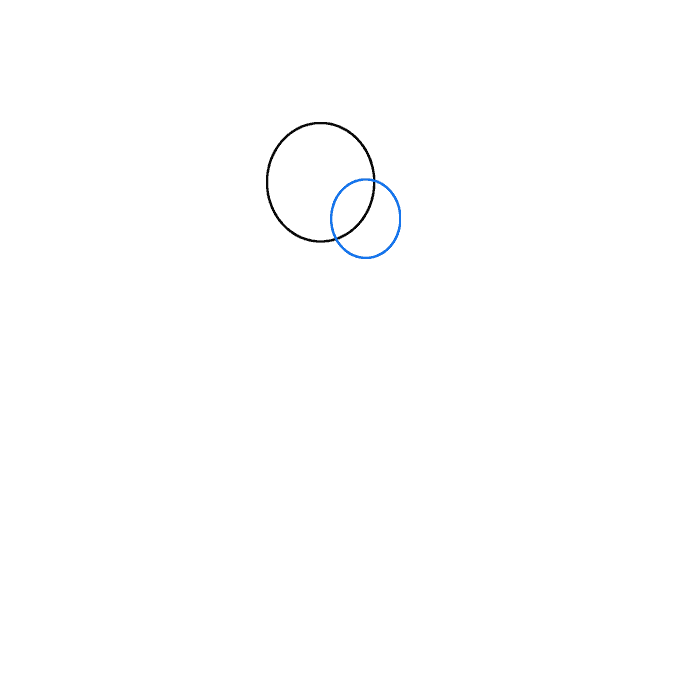 2. Draw a second, slightly smaller, circle overlapping the first. This will help you to outline the lower portion of the head. 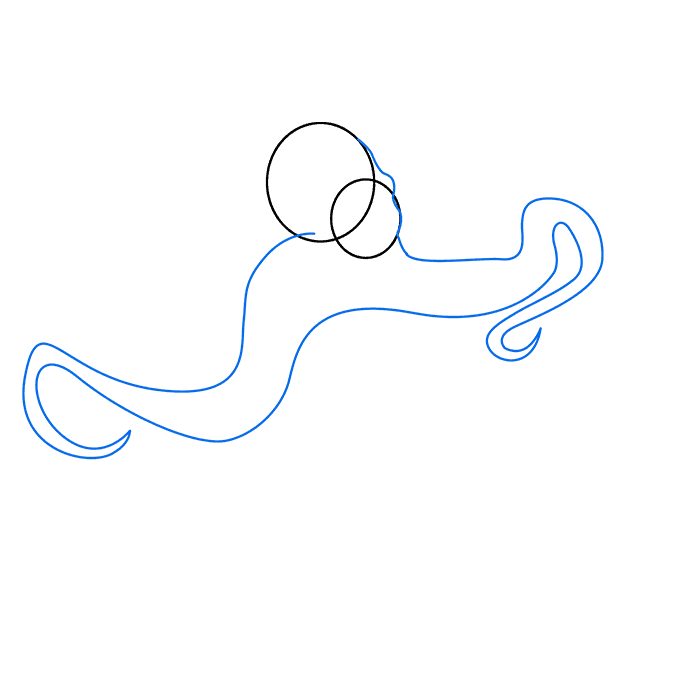 3. Connect the two circles using a short, curved line on one side. This forms the octopus’s sinister brow. Then, extend a long curved line from the bottom of the larger circle and the side of the smaller circle. Allow the lines to form irregular spiral patterns at the ends. Then, draw a long, curved line roughly parallel to the preceding lines. It should meet each of the previous lines at a sharp point. This forms the first two of the octopus’s many arms. 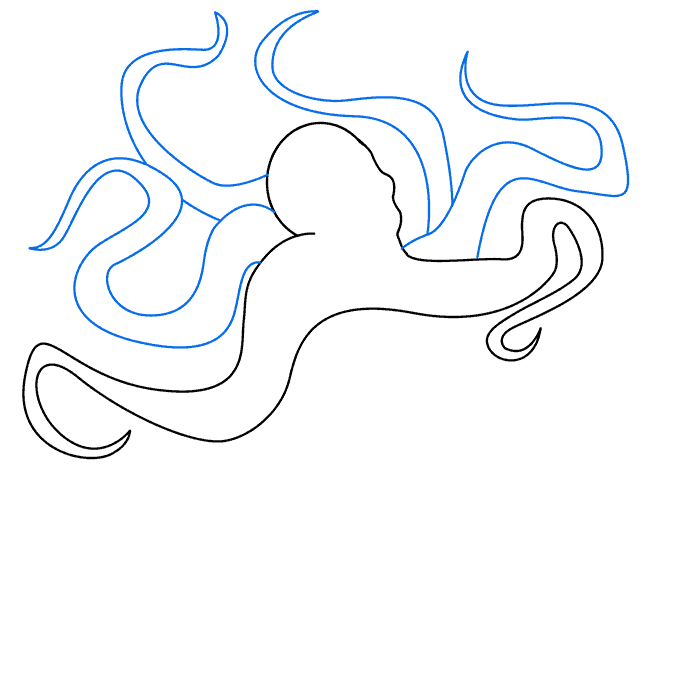 4. Erase the guide lines left by the original circles, leaving a clean outline of the head. Then, draw four more arms. For each, extend a pair of curved lines from the head or from behind another arm. Allow the lines to twist and turn, getting closer together until they meet at a sharp point. 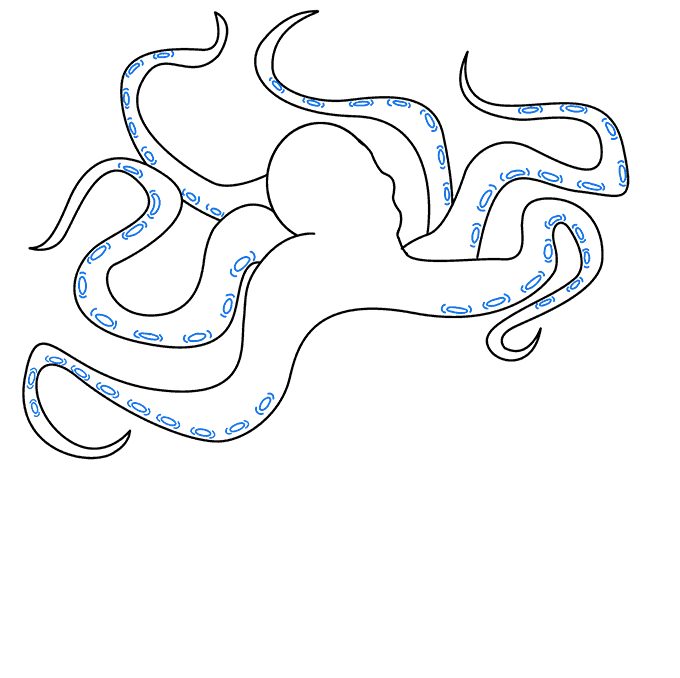 5. Draw suction cups along the bottom of each leg. For each suction cup, draw a small, flat oval. Then, draw short lines on each end. 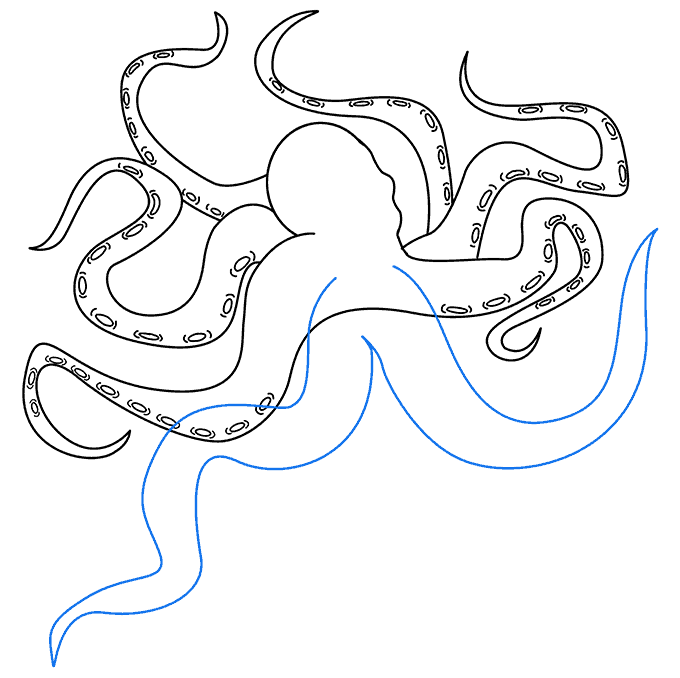 6. Draw the final two legs of the octopus so that there are eight in total. Extend two pairs of curved lines from between the front two arms, and allow each pair to meet at a point. 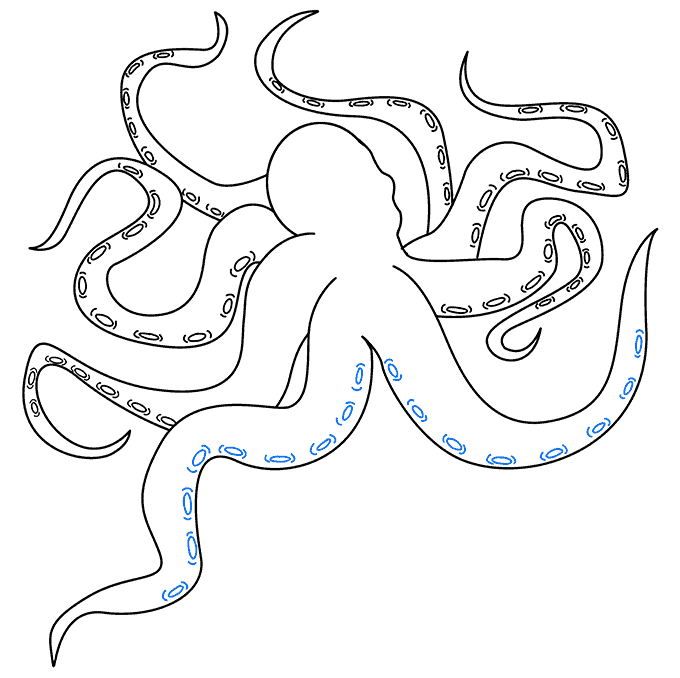 7. Draw the suction cups or suckers on the final two legs. For each sucker, draw a small, flat oval with short, curved lines on each end. Erase any remaining guide lines. 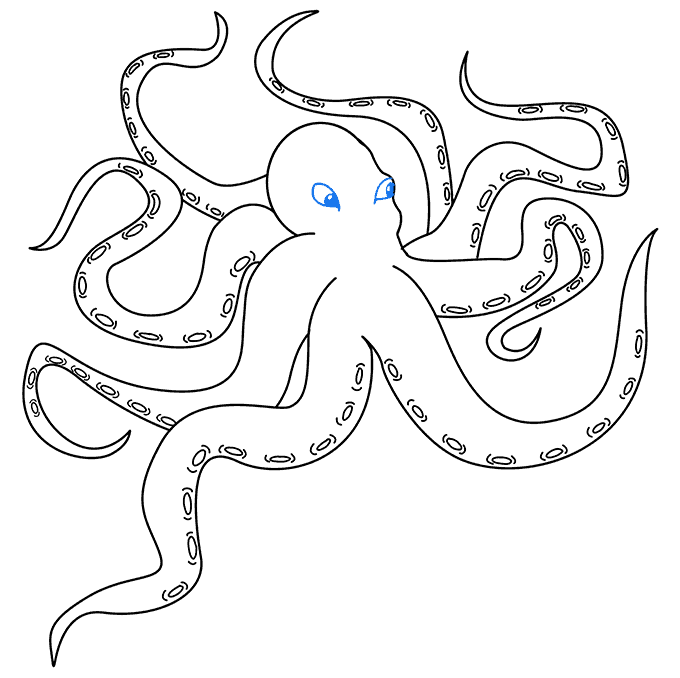 8. Draw the Kraken’s mischievous eyes. For each eye, draw an inverted teardrop shape. Then, shade a small circle in the bottom corner to indicate the pupil.

Complete the Outline of Your Kraken Drawing - Step 9 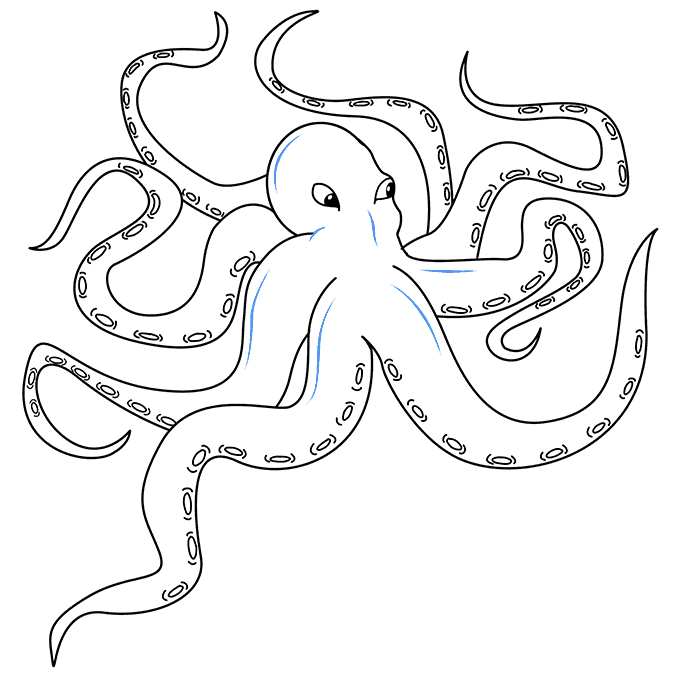 Color your Kraken. Then, check out more real and mythical animals among our cartoon animal drawing guides. 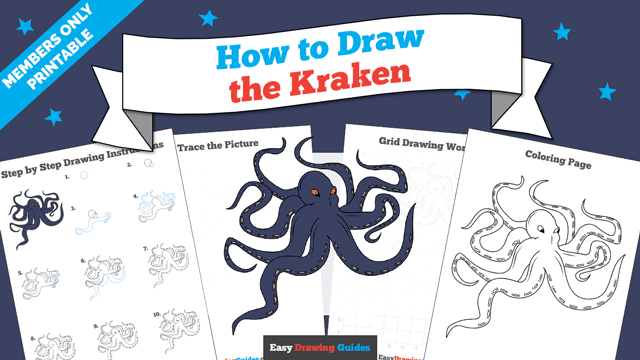