By following the simple steps, you too can easily draw a beautiful New York Skyline. 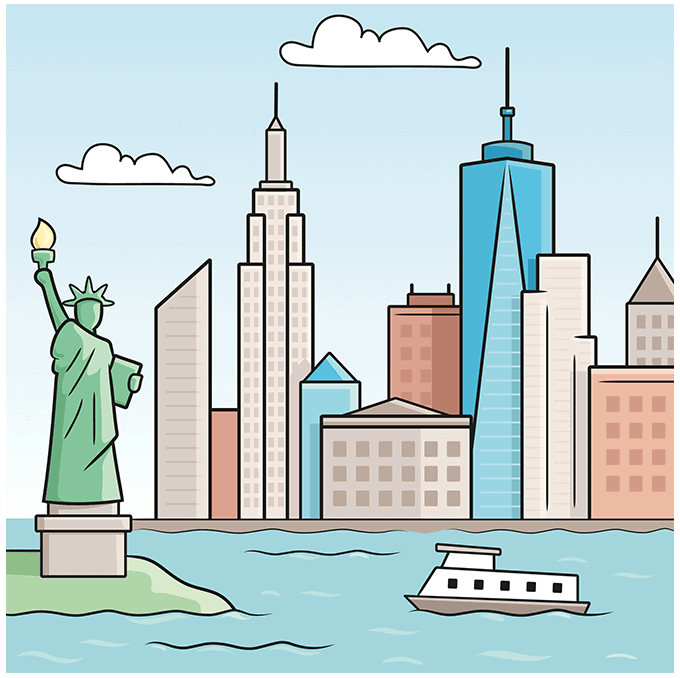 New York City, nicknamed The Big Apple, is one of the most iconic cities in the world - and so is its skyline.

Many immigrants, traveling to America in search of a better life, longed for their first glimpse of the skyline and the welcoming torch of Lady Liberty.

The Statue of Liberty, fully titled Liberty Enlightening the World was a gift from the people of France to those of the United States. It depicts Libertas, the Roman goddess of liberty.

The New York City skyline has been immortalized in fiction, too. For centuries, literary and film characters have made pilgrimages there.

Godzilla and countless other monsters have destroyed it, and Spider-Man has protected it.

The 2004 film The Day After Tomorrow epitomizes the climate crises with a downed Statue of Liberty and a city covered in ice.

Would you like to draw a cartoon of New York City? This easy, step-by-step cartoon drawing tutorial is here to show you how.

All you will need is a pencil, pen, marker, or crayon, and a sheet of paper. You may also want to color your finished city.

If you liked this tutorial, see also the following drawing guides: Eiffel Tower, Statue of Liberty, and City. 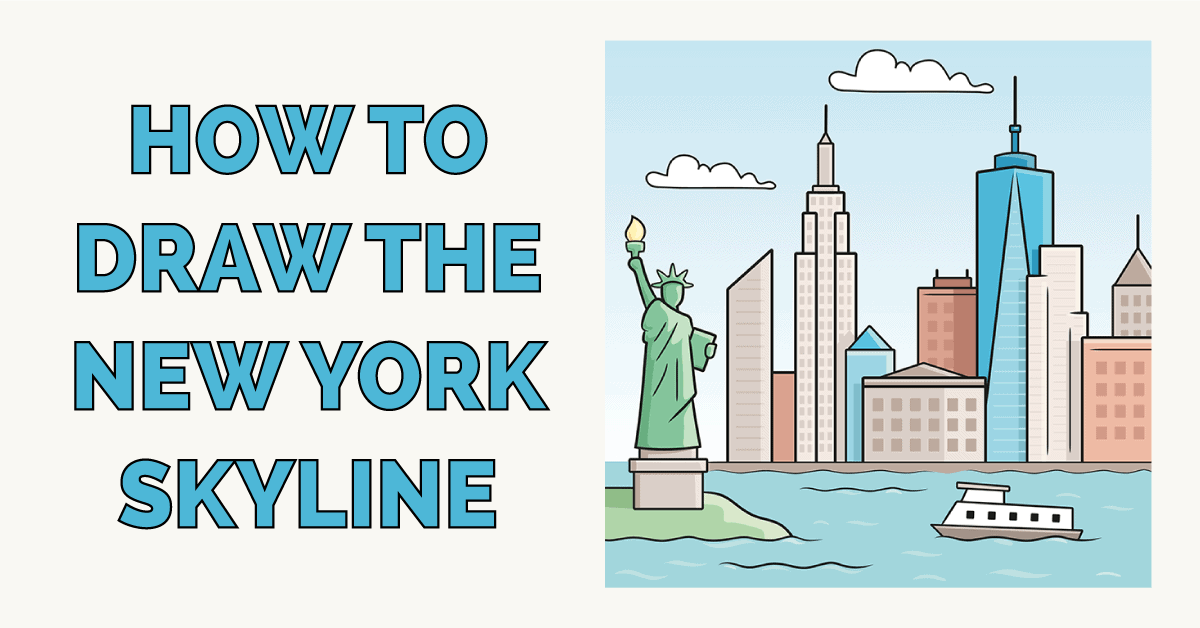 How to Draw a Great Looking New York Skyline for Kids, Beginners, and Adults - Step 1 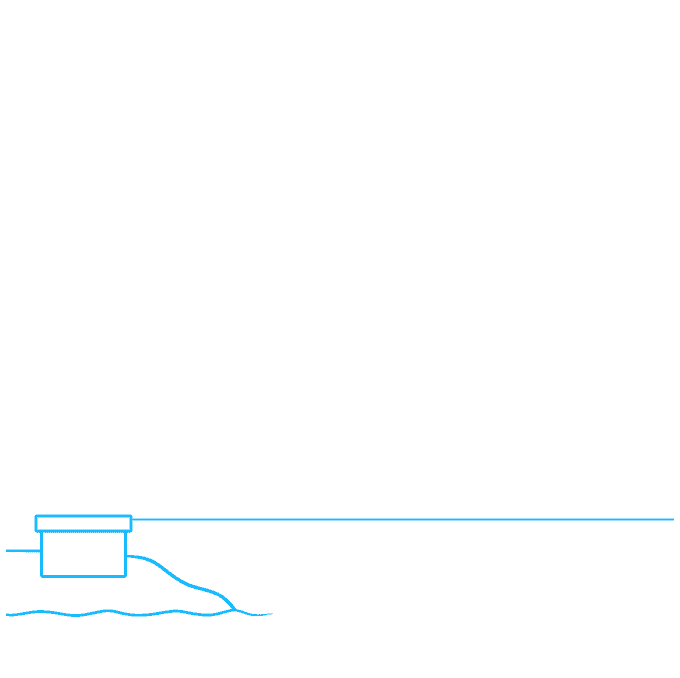 1. Draw a straight horizon line. Even with the horizon, use four straight lines to draw a narrow horizontal rectangle. Below it, draw a thicker rectangle. This forms the base for the Statue of Liberty. Draw a curved line passing behind the base, and allow it to meet a horizontal wavy line beneath it. This indicates the island and the lapping waves. 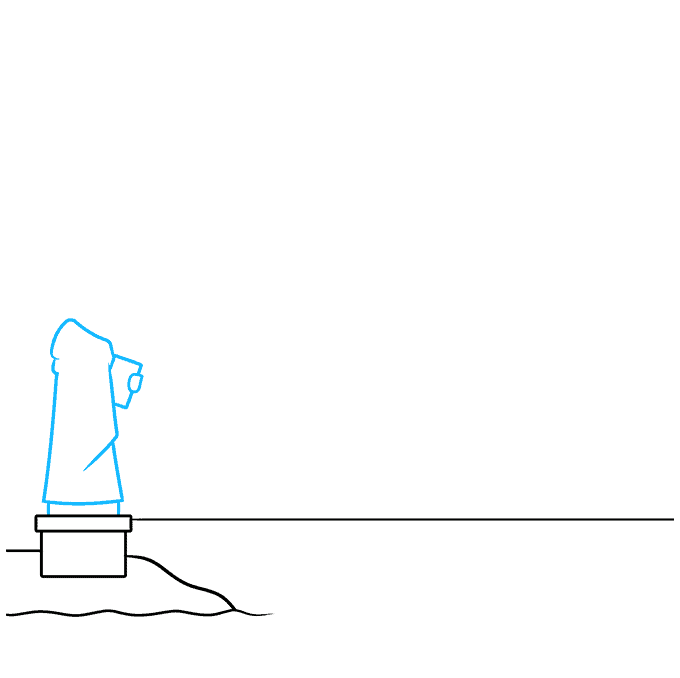 2. Outline the Statue of Liberty. Draw short lines upward from the base, and connect them with a curved line. From this, draw two sets of overlapping curved lines. Notice the large overlap near the bottom of the statue’s gown, and the small ones at the shoulder. Draw a small rectangle partially hidden by the body of the statue, and a small rounded rectangle for the hand. What is she holding? It is a tablet engraved with the words “JULY IV MDCCLXXVI,” meaning “July 4, 1776” - the date on which the American Declaration of Independence was adopted. 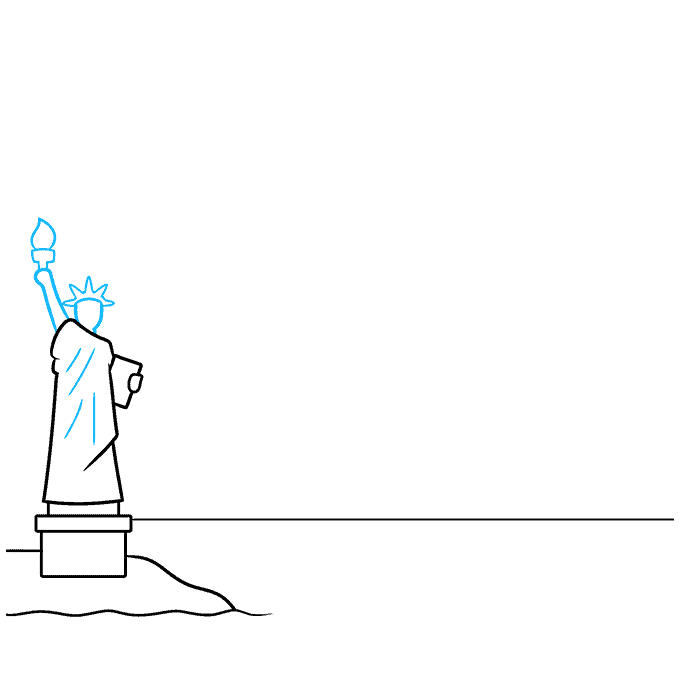 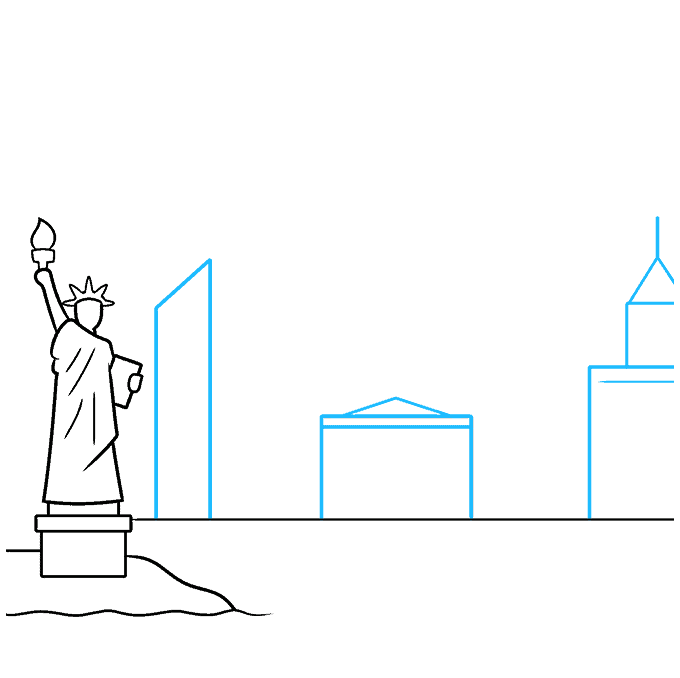 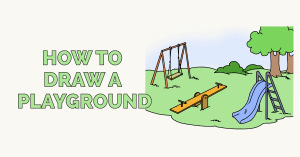 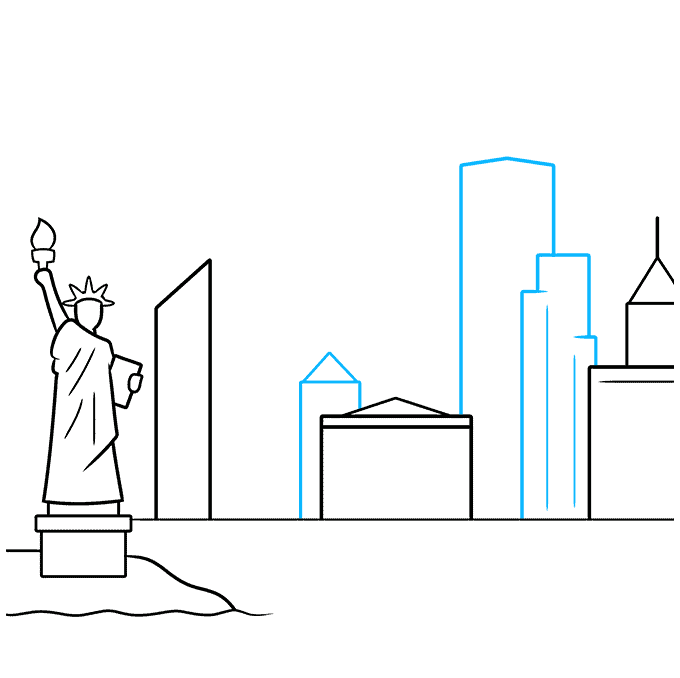 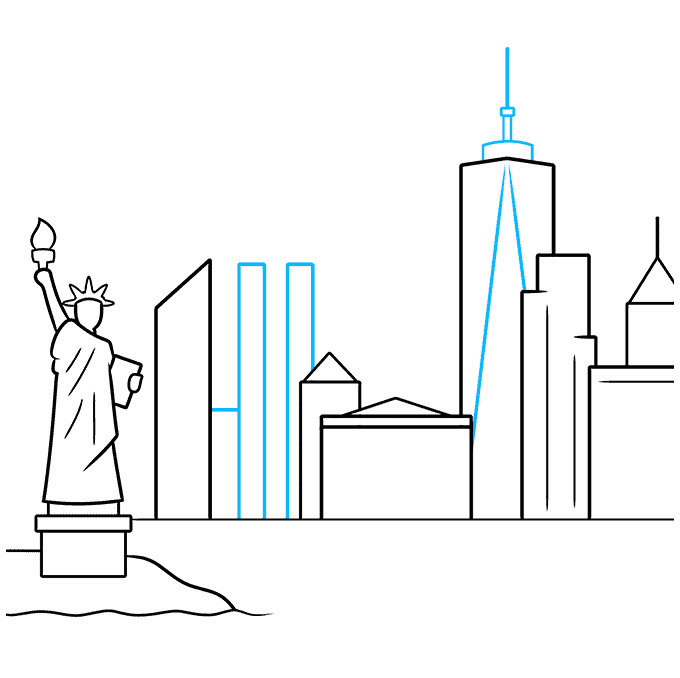 6. Draw more narrow vertical rectangles in the middle ground. Draw a triangle on the front of the tallest building. Enclose a series of rectangles on its roof, topped with a vertical line. This building resembles the One World Trade Center, an office complex and memorial to those lost in the 9/11 terrorist attacks. 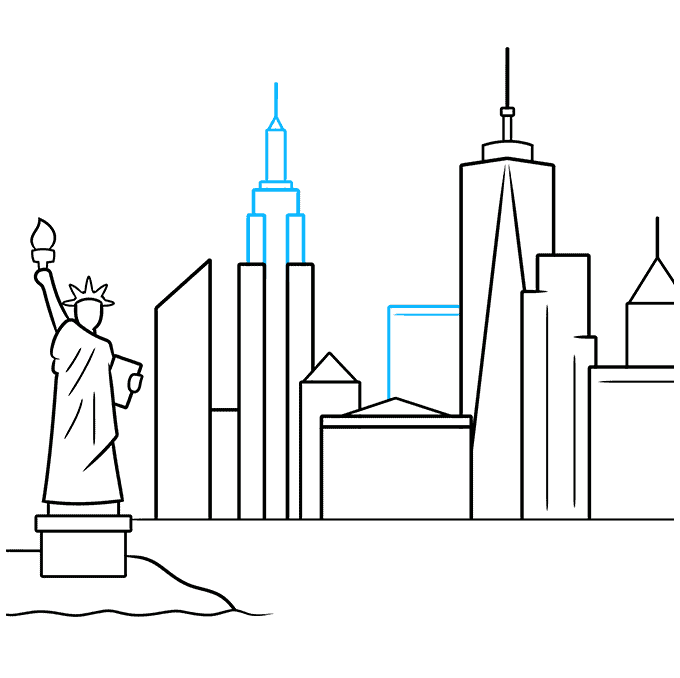 7. Draw another rectangle with a horizontal line near its top in the middle ground. Atop two of the narrow rectangles, draw two more, slightly smaller rectangles. Enclose increasingly narrow rectangle shapes on its roof, followed by a small triangle and a vertical line. This is the Empire State Building - one of the most famous landmarks in New York City.

How to Draw a Park 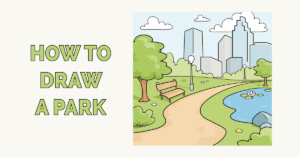 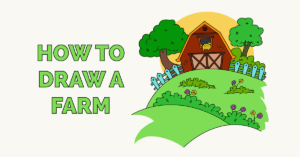 How to Draw a Lake 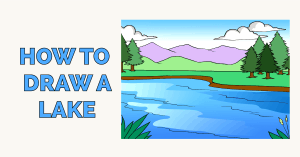 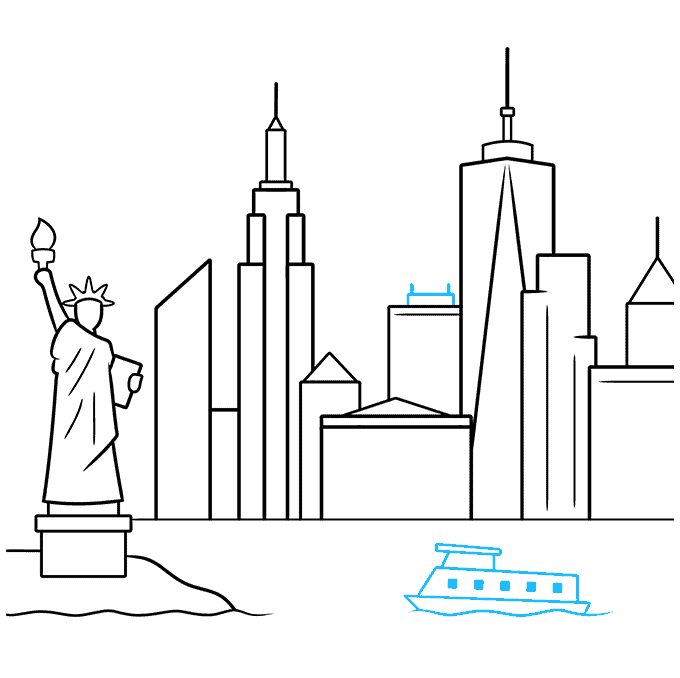 8. Draw a small rectangle and short vertical lines on top of one of the buildings. Then, draw a boat in the harbor. Draw a wavy line to indicate the water, then enclose a partial trapezoid on top of it to form the boat’s hull. Draw the cabin using a slanted rectangle. Shade small squares along the sides of the cabin to indicate windows. Then, draw two more rectangular shapes on top.

Complete the Outline of Your New York Skyline Drawing - Step 9 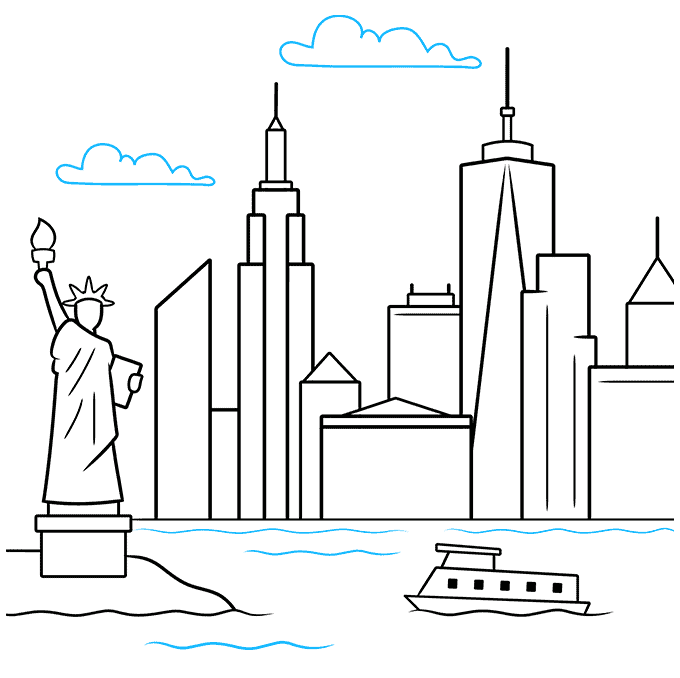 9. Use curved lines to draw clouds in the sky and waves on the water. 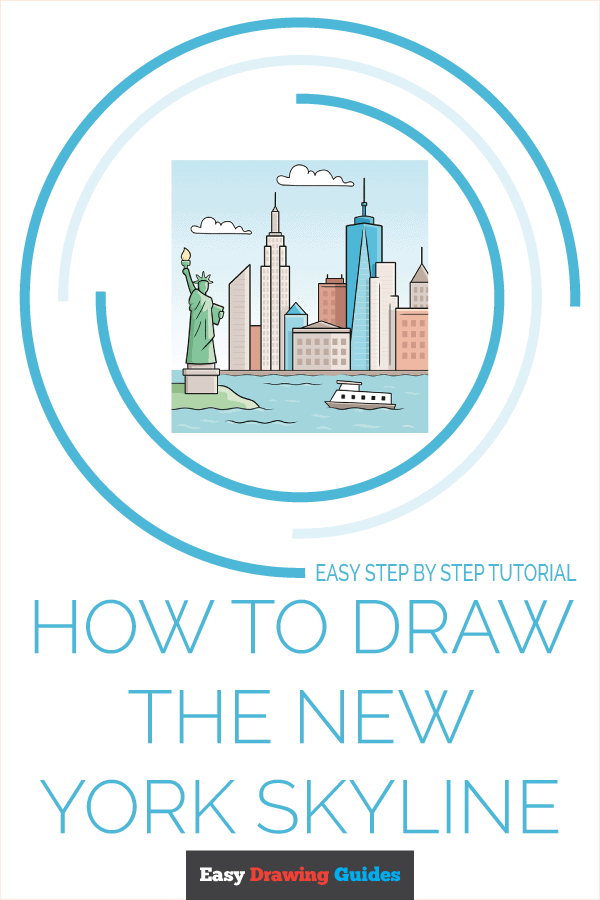 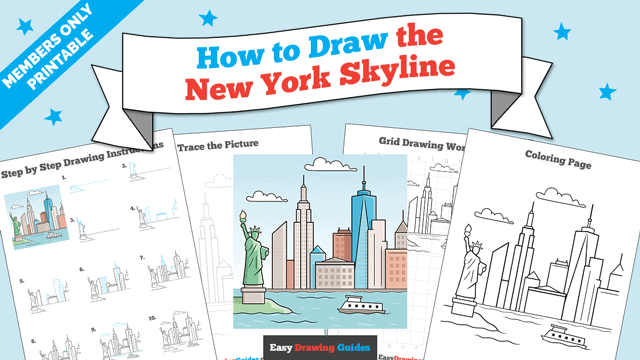