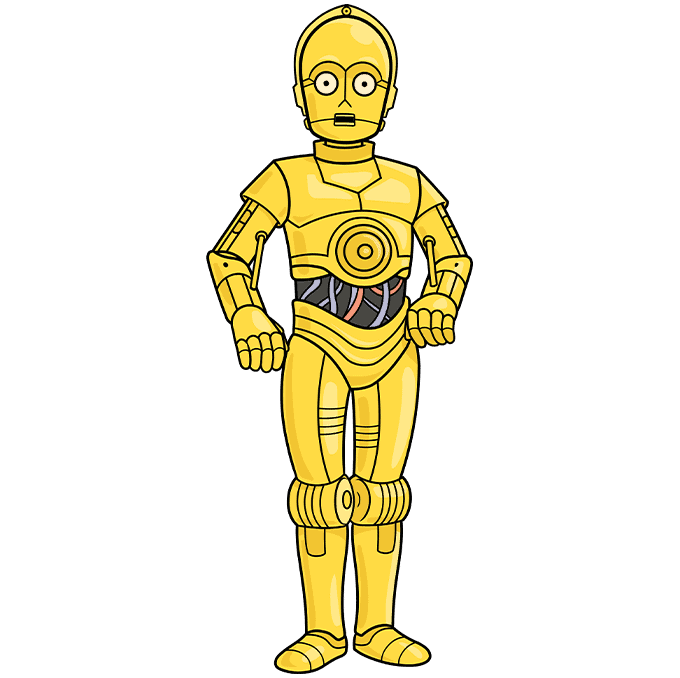 “Sir, the possibility of successfully navigating an asteroid field is approximately 3,720 to 1.” - C-3PO, Star Wars - Episode V: The Empire Strikes Back

Would you like to learn how to draw C-3PO from Star Wars? This easy, step-by-step cartoon robot drawing tutorial is here to show you how. Odds may be against navigating an asteroid field, but they favor mastering this drawing!

Along with R2-D2 and BB-8, C-3PO is one of the most beloved droids of the Star Wars franchise.

C-3PO was built by young Anakin Skywalker on the desert planet of Tattooine. He is a protocol droid, meaning he specializes in etiquette and is "fluent in over six million forms of communication." Thus, Threepio often serves as a translator. C-3PO actually stands for "Cyborg 3 Protocol."

Many years later, he and R2 returned to his home planet in an escape pod, bearing a secret message from Princess Leia. He served the Republic, the Rebel Alliance, and the Resistance, though his memory was wiped sometime after the Clone Wars.

May the Force be with you. 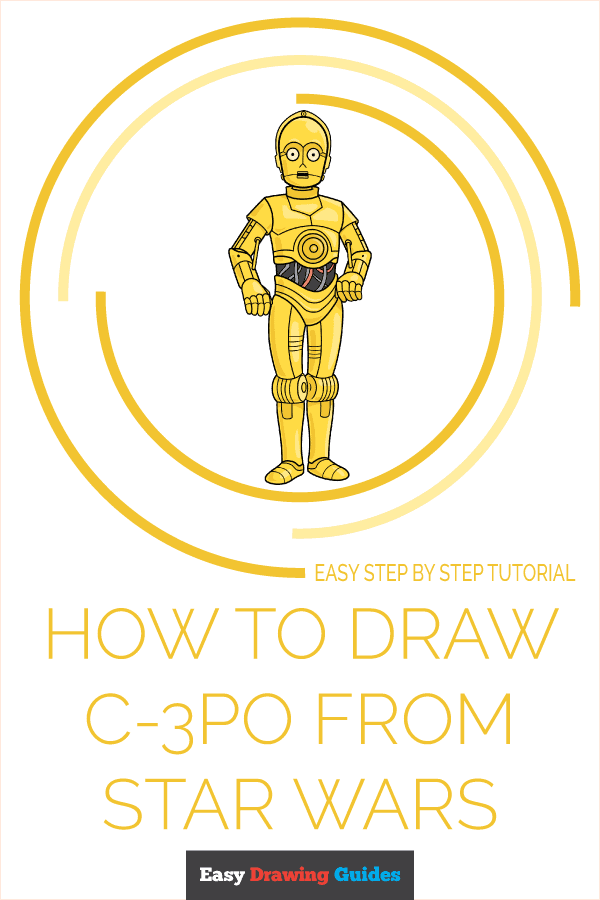 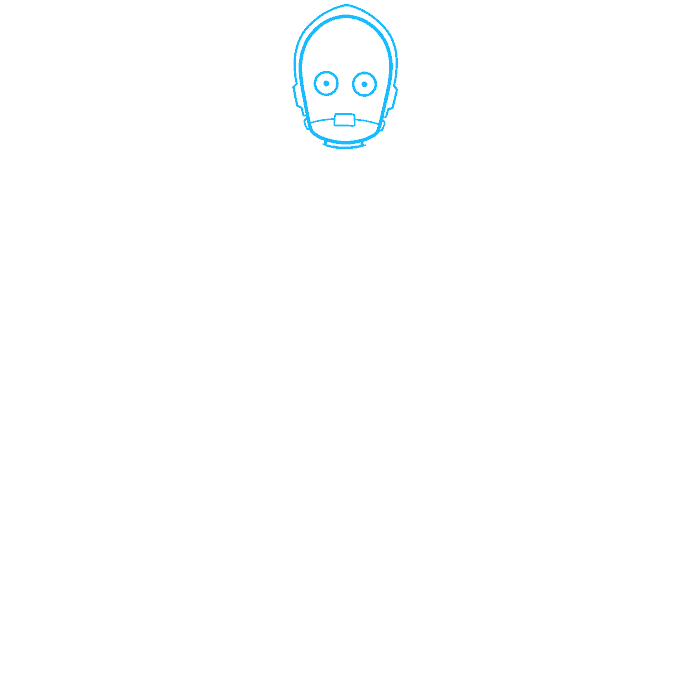 1. Begin by drawing C-3PO's head. Start with a rounded shape that is flat on the bottom. Inside it, draw two circles for eyes, with a dot inside each. Draw a small rectangle for the mouth, and connect it to the sides of the head with curved lines. Use additional lines to detail the outline of the head and neck. 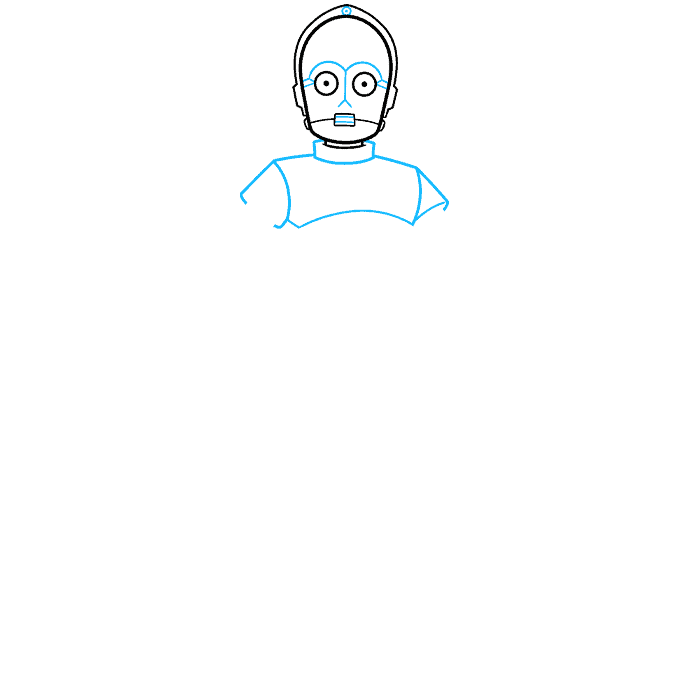 2. Draw a dot within a circle at the top of the head. Then, draw curved lines above the eyes and a "Y" shaped line between them. 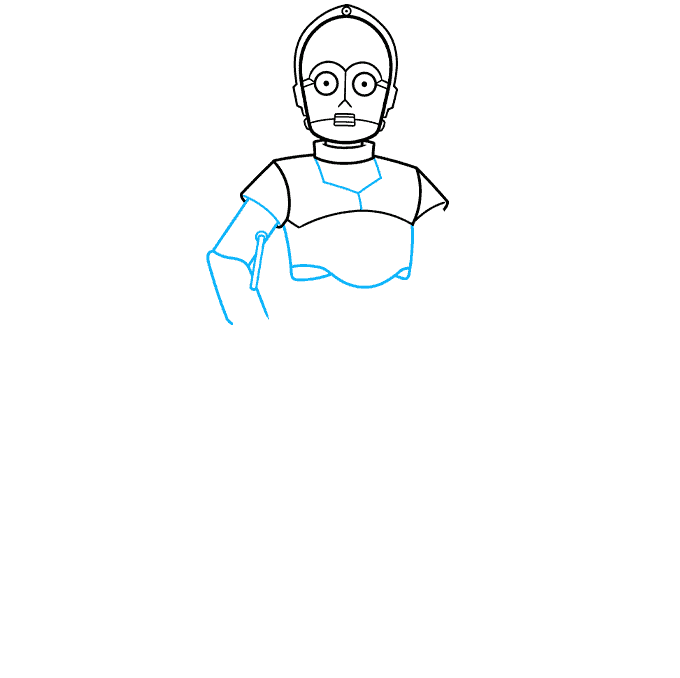 Draw a narrow rectangle between the two sections of the arm, and sketch a small circle around the top of it. 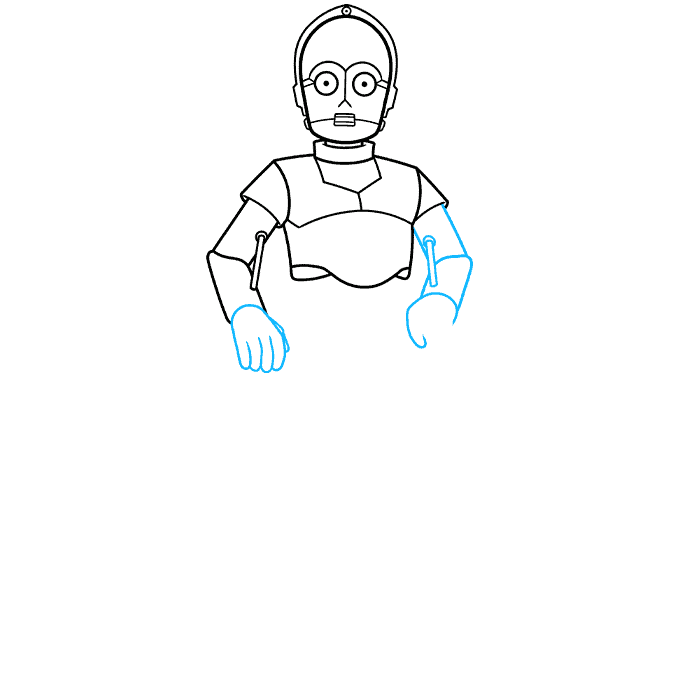 4. Draw C-3PO's remaining arm in the same way - irregularly rounded rectangles connected by a narrow rectangle with a circle at the top. Then, use curved lines to sketch '3PO's hands and fingers. 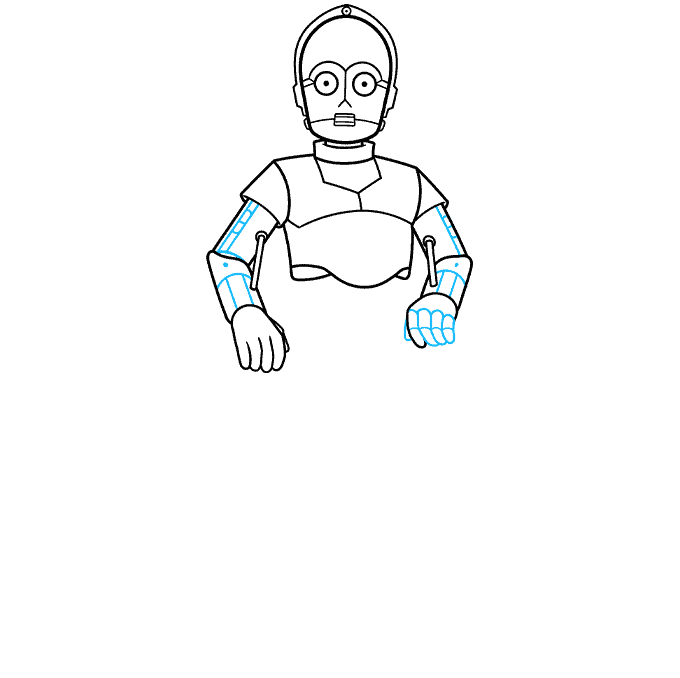 5. Detail the arms. Draw two parallel lines across the upper arm and band the narrow shape with short lines. 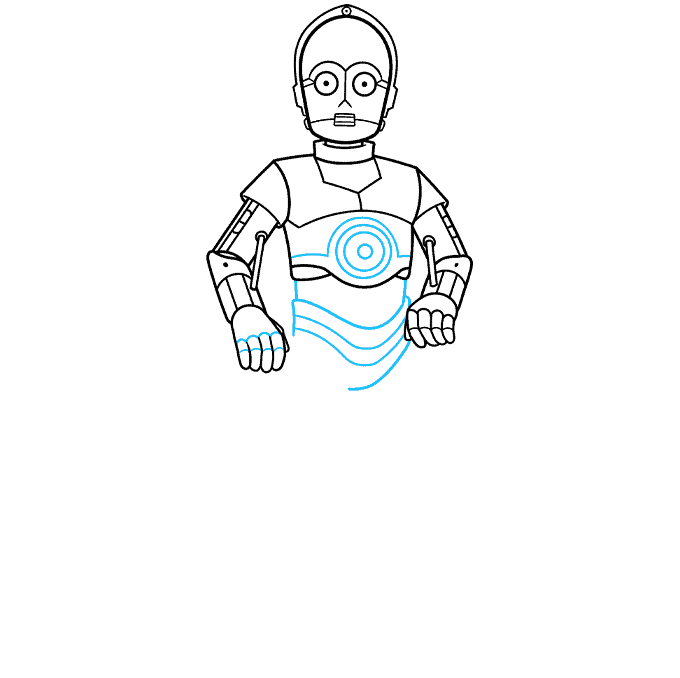 6. Finish banding the fingers. Then, draw a half-circle shape across the torso and connect it to the sides with curved lines. Inside this shape, draw a series of successively smaller circles. Then, draw several layers of curved lines connected on the sides to begin the droid's hips. 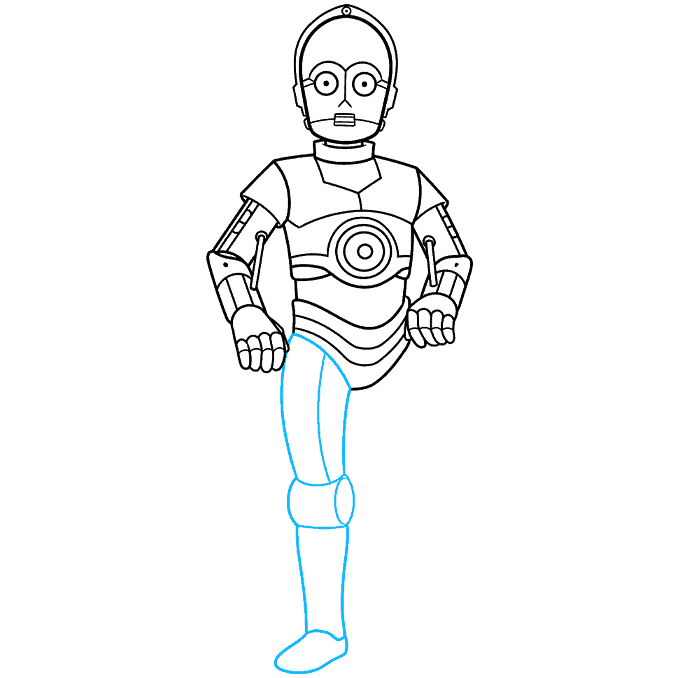 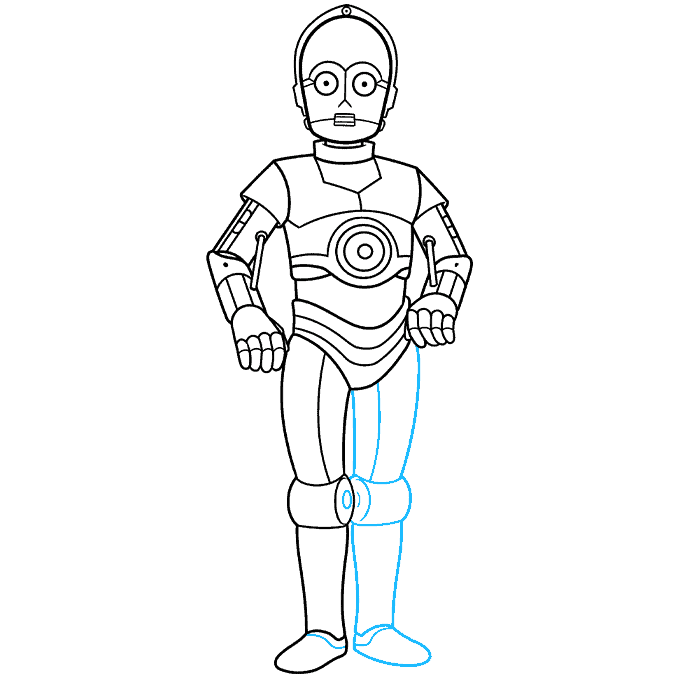 8. Draw the remaining leg a mirror image of the first. Detail the knee joint with small ovals and place a curved line across the top of the foot. 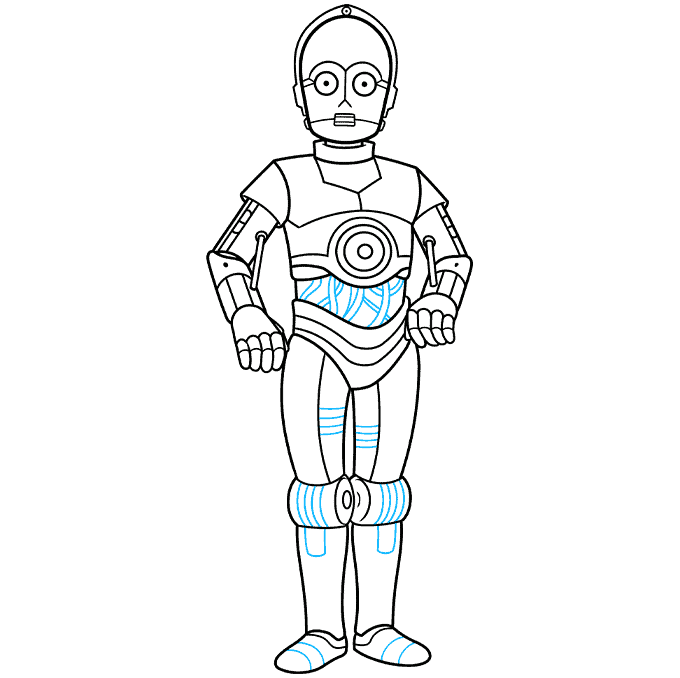 9. Detail the legs and feet with curved lines and rounded rectangles. Draw sets of overlapping parallel lines across the torso to create wires.

Color your cartoon of C-3PO. He is typically gold in color but occasionally dons spare parts, like a silver leg. 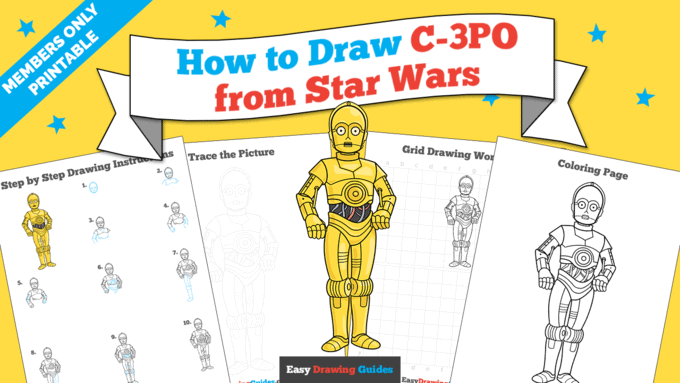