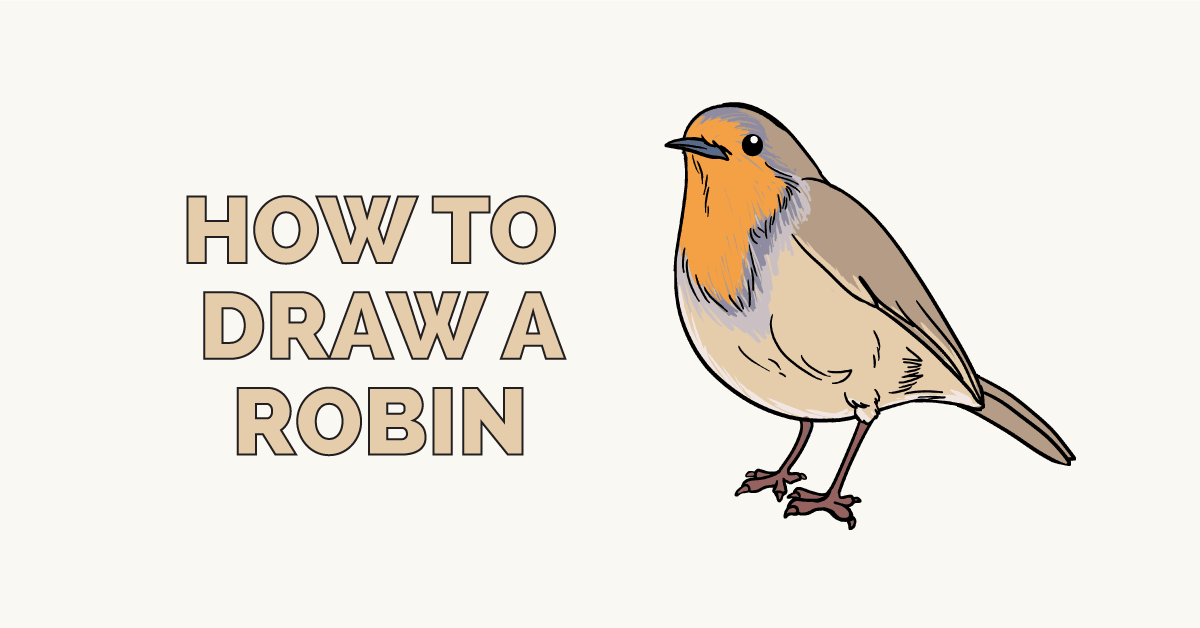 "He rocks in the treetop all day long,
Hoppin' and a boppin' and singing his song.
All the little birds on Jay Bird's street
Love to hear the robin go 'tweet, tweet, tweet.'
Rockin' Robin!"
- Rockin' Robin by Bobby Day

Robins belong to the group of birds called thrushes, and are native to Europe and North America.

American Robins lay bluish green eggs; most boxes of crayons include a shade called "robin's egg blue." Robins are frequently referred to as "robin red breast" due to their rusty coloration. Robins are known to sing all day long.

Native American myths held that the robin got its red coloration by fanning the flames of a dying fire (learn how to draw a fire), in order to rescue a man and child. Robins are also a symbol of spring.

In popular culture, the robin has been lauded in song and in poetry, such as in Emily Dickinson's "I Dreaded That First Robin So."

The DC Comic book character Robin may be based on Robin Hood, but his red shirt is reminiscent of the bird. A 1969 story shows that his mother named him Robin because he was born on the first day of spring.

Would you like to draw a robin? This easy, step-by-step drawing tutorial is here to help. All you will need is a pencil, an eraser, and a sheet of paper. You may also wish to color your finished drawing.

Let's get started; after all, the early bird catches the worm!

If you liked this tutorial, see also the following drawing guides: Cardinal Bird, Raven, and Peacock.

Step-by-Step Instructions for Drawing a Robin

1. Begin by drawing an oval. This will form the bird's head.

2. Use long, curved lines to outline the bird's back, neck, and stomach. Allow the lines to meet in a gentle, curving point.

3. Erase the guide lines left by the original oval, leaving a clean outline of the bird.

5. Erase the guide lines from the wing and body.

6. Draw many narrowly spaced, short curved lines to add the detail of feathers to the neck and chest. The "line" formed by these smaller lines should form a "V" shape at the top of the chest and curve around above the wing. Detail the wingtip using long curved lines. Draw a line of short strokes and "V" shaped lines at the base of the tail.

7. Draw a small circle within a circle to form the eye; shade between the circles. Separate the sections of beak using a curved line. Draw short lines beneath the beak to add texture. Draw short and longer lines on the stomach as well.

8. Use a series of short, curved lines to outline the upper leg, erasing guide lines as necessary. Draw the leg using a pair of parallel lines, and form the toes by doubling curved lines back upon themselves. Draw a small triangle to form each claw. Enclose long, narrow shapes using "U" shaped lines to indicate the tail feathers.

10. Color your robin. The European robin is as pictured in our illustration. The American robin has a black head, yellow beak, grey back, and red chest and stomach.

Check out our other fun and feathered drawing guides.

The Complete Robin Drawing Tutorial in One Image

How to draw: Robin - all drawing steps